Michigan parks are popular, but underfunded. They want some COVID money.

MACKINAC ISLAND—As the first wave of the COVID-19 pandemic shuttered schools, stores, offices and restaurants, Michigan’s parks were among the few destinations that remained open.

In fact, they welcomed more patrons than ever before, as Michiganders and out-of-state visitors grasped for a safe way to recreate, exercise and mollify the stress of living through a pandemic. A year-and-a-half later, the trend isn’t letting up.

“I could double the size of our campground and still have 80 to 90 percent occupancy,” said Kendall Klingelsmith, director of parks and recreation for the city of Petoskey.

Not that he actually has the staff or budget to do so.

Michigan’s state and local parks have long struggled to find funds to keep up with basic maintenance, a reality that has left grass unmowed, pavement cracked and equipment badly outdated.

“We have some places that, if you’re in a wheelchair, you would have a very difficult time going to the bathroom,” said Ron Olson, parks chief for the Michigan Department of Natural Resources. “That’s not fair. That's not right. We strive to fix those. But we can’t do it until we get the funding.”

Now, as parks throughout the state experience a visitation renaissance and the federal government funnels gobs of pandemic relief dollars into Michigan, state and local parks officials are urging lawmakers to send some of the windfall their way.

They’re not looking for fancy new bells and whistles, they say — just money to trim trees and grass, modernize bathrooms and repave roads that are disintegrating due to decades of delayed maintenance.

“Those of us in the parks profession have always known that parks are an essential service,” Klingelsmith said. “Others haven't necessarily seen it that way.”

Parks officials took their sales pitch on the road to the Detroit Regional Chamber’s Mackinac Policy Conference on Mackinac Island this week, appearing at a session where they celebrated the pandemic-driven parks renaissance and discussed the need to ensure Michigan’s parks can serve a crush of new visitors.

“We had a goal of raising that decline by 1 percent,” McMillan said.

Instead, attendance shot up 35 percent last year — a trend echoed at other local parks throughout the state.

But though many parks collect user fees, higher attendance hasn’t resulted in a windfall.

Most of Michigan State Parks’ operating revenue comes from recreation passports and camping reservations. In the current fiscal year that ends Sept. 30, the parks generated about $48.7 million in camping and lodging revenue — a $9.1 million increase over pre-pandemic levels. That money pays employees and buys toilet paper and soap for bathrooms — supplies that become costlier with more visitors using facilities.

After covering those costs, Olson said, the system has little cushion for bigger capital expenses, like repaving pothole-laden roads and improving bathrooms or other facilities. As a result, Michigan’s state parks have racked up a hefty $264 million deferred maintenance bill.

“Our infrastructure is stressed,” Olson said.

Stimulus proposal ‘a lot of cheese’

With parks experiencing a moment in the sun, better funding them may be a rare area of bipartisan agreement in Lansing this year.

Gov. Gretchen Whitmer in June announced a proposal to send $250 million from the federal American Rescue Plan to state parks, and followed with a plan to dedicate another $150 million toward grants for local parks.

It would represent a major infusion for a state parks system whose annual operating budget this year is just $80 million, along with $20 million for capital improvement projects.

It’s one of several areas of likely investment from the stimulus bill that’s expected to infuse state government with a total of $6.5 billion.

Abby Mitch, spokesperson for Senate Majority Leader Mike Shirkey, said that while the Senate has yet to introduce legislation regarding state or local parks funding, “both the (Whitmer) administration and the Senate wants to prioritize those things.”

“There are large points of agreement and general priorities are in line,” she said. “It’s just a matter of figuring out the details.”

DNR Director Dan Eichinger described the possible infusion of federal money as “a lot of cheese” for a state agency that has been running on a shoestring.

If Whitmer gets her way, $26 million would be used to develop Genesee County’s first-ever state park at the former site of Flint’s Chevrolet plant along the Flint River. Much of the rest would help slash the system’s deferred maintenance bill. 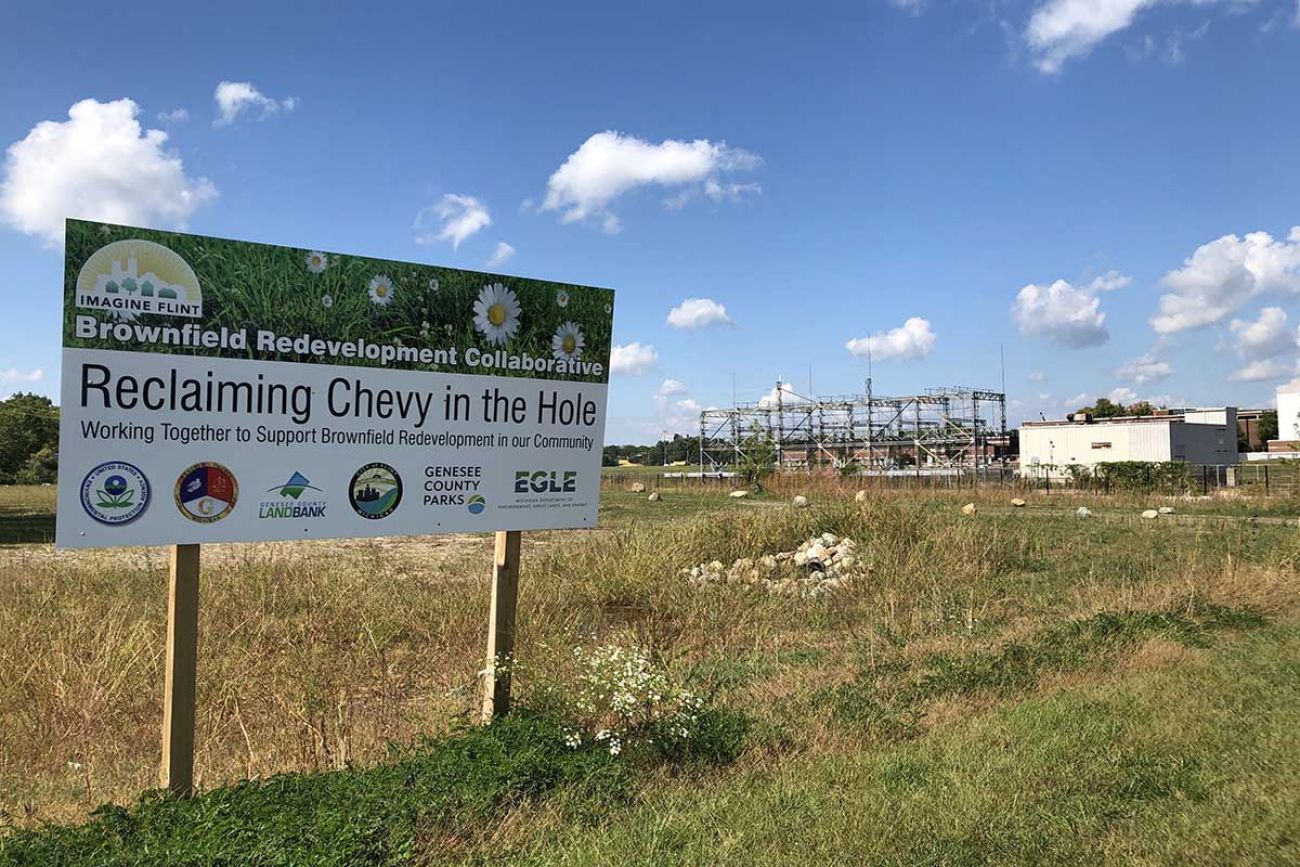 “Our main priority is to sort of fix what we built 50 or 60 years ago,” Eichinger said.

Among the projects that money could cover: Repaving roads. Upgrading electrical service at campgrounds built before the era of hulking RVs that require more power. Rebuilding Houghton County’s Lake Linden trail, where damage from a 2018 flood still hasn’t been fixed. Repairing hundreds of culverts, dams and bridges on state park property.

Bradford said she wants to see the state distribute the money with an eye toward leveling the playing field between wealthy and poor communities by funneling money into lower-income communities where residents are less-able to support parks through millages.

As for how she’d use the money?

But a one-time infusion from the stimulus bill isn’t enough, parks advocates say. It will help with maintenance, sure, but it still leaves parks without enough operating revenue to keep facilities running smoothly.

Money to operate Michigan’s 103 state parks has steadily increased since the state established its $11 annual recreation passport in 2010, from about $48 million in fiscal year 2011 to about $80 million this year.

But parks officials say costs have risen over that time, too, and they still struggle to compete with private businesses for seasonal workers, leaving them understaffed while visitation is soaring.

Paying more money is an obvious solution. But for every dollar-per-hour raise to wages, the department must find $1 million more in its budget, Olson said.

That’s money the department doesn’t have, which means parks staff are stretched thinner, resulting in longer gaps between routine mowing, less time spent picking up litter, and more outside help with bathroom cleaning.

“It's been getting bad for the last four or five years,” Klingelsmith said. “But last year it got terrible, and this year was worse.”

Whitmer agrees parks need more than a one-time boost, and has called upon legislative leaders to work with her to find permanent funding for Michigan’s parks.

“We need to have a sustainable solution that helps the department handle maintenance requests going forward,” she said while announcing the proposed stimulus funds for parks.

Mitch, Shirkey’s spokesperson, said she’s not aware of ongoing conversations in the legislature about securing stable funding, but “in general, we’ve been trying to avoid creating any ongoing costs.”

With the exception of Belle Isle in Detroit, the state parks system receives no state general fund money. That leaves parks managers with few options for new revenue, other than raising fees on visitors and campers.

Olson said that’s an option on the table.

It’s something the state parks system does every few years. But raising fees too high or too frequently can also turn public parks into playgrounds for the privileged by making them too expensive for lower-income families.

“We're a public operation,” Olson said. “We're not here to try to make as much money as possible, so we need to keep our eye on affordability.”

Michigan’s annual state parks pass is the 13th-cheapest in the nation, according to the nonpartisan election site Ballotpedia, and well below the national average of $59.76.

At Huron-Clinton Metroparks,  a system encompassing Livingston, Macomb, Oakland, Washtenaw, and Wayne counties that is funded by user fees and a .25 permanent millage, director McMillan is focused on pushing for changes to Proposal A and the Headlee Amendment, two state laws that hinder local governments’ ability to generate revenue through property taxes.

Now, that’s not the case. The inability to pull in tax revenue has hurt local governments’ ability to provide all sorts of services, McMillan said, including parks.

The proposed stimulus dollars would help, McMillan said. But if Michigan doesn’t want its parks to immediately resume racking up deferred maintenance bills, she said, the regulatory structure that limits local tax revenue “has to be fixed.”

So far, lawmakers in Lansing have announced no plans to take up that issue.