Red flags fly above the sand of Michigan’s Great Lakes beaches warning when the waves are dangerous, but that’s not always enough to stop swimmers from entering the risky water.

Now state officials may increase pressure on people who ignore their warnings: Closing the beaches and ticketing anyone who steps into the waves.

Michigan’s Department of Natural Resources will be reviewing the proposed policy change over the next month. After getting public comment, a final decision is expected in mid-August.

It also comes amid concerns that Great Lakes drownings will set a new record this year, prompting DNR officials to say the red flag warning system is no longer enough to keep people safe.

“People are not adhering to the water safety measures and education provided by the Department and are still entering the water,” according to a memo sent to the Natural Resources Commission and signed by six DNR department heads.

“Even more alarming,” the memo said, “is the observations of people entering the water during these dangerous conditions while a water rescue is occurring.”

Ron Olson, chief of the state’s Parks and Recreation Division of the DNR and one of the people who signed the memo, said most people take “personal responsibility” at the beaches by following protocols that don’t put them in harm’s way.

However, people who don’t can lead to dangerous circumstances, especially if someone is unfamiliar with the Great Lakes and their force — both in the water and on piers.

Examples happened in Grand Haven in summer 2020 when several visitors were swept off the Lake Michigan pier and had to be rescued. A day later, a 14-year-old boy drowned despite beachgoers forming a human chain to try to find him. 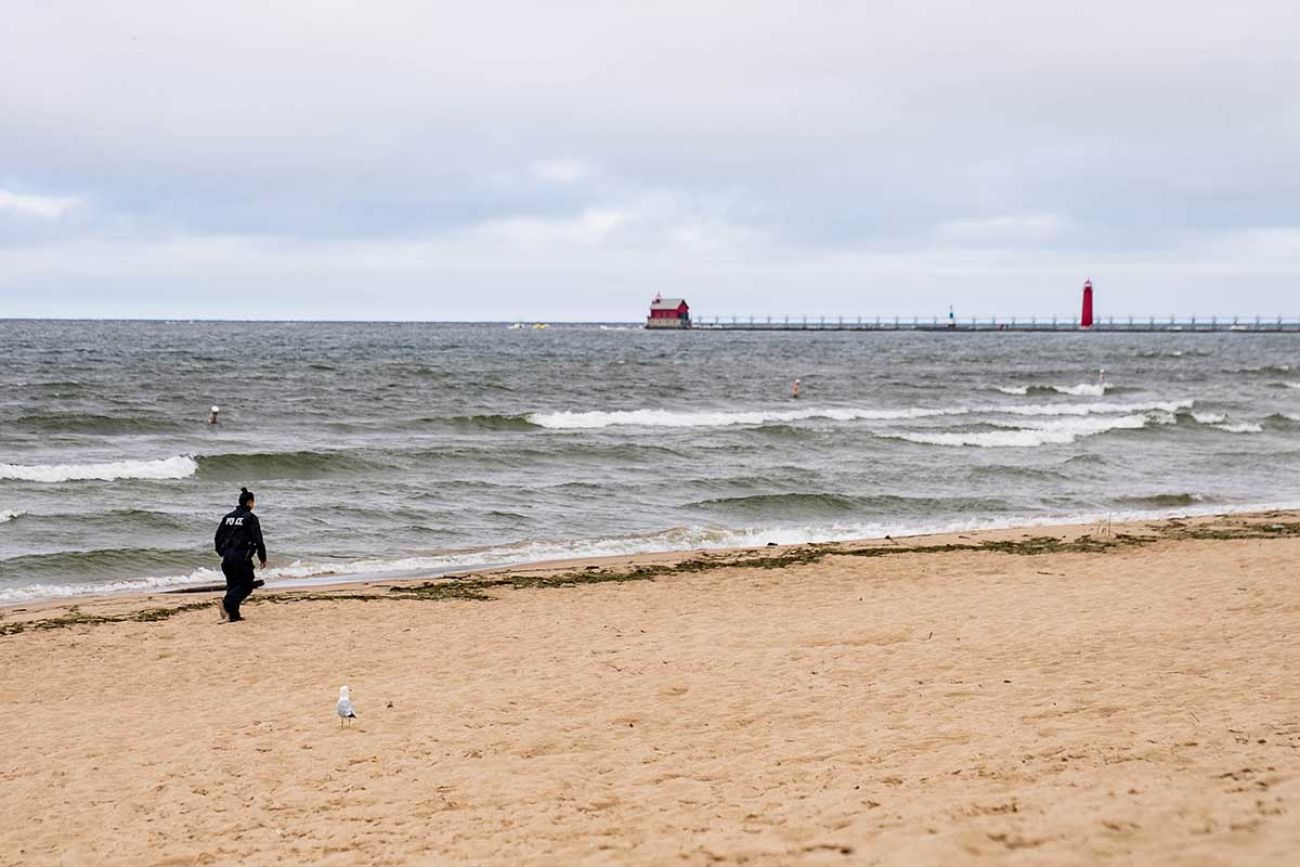 “People just need to think before they engage in what they’re doing, because sometimes it may seem to be a really fun thing to do, but then they put themselves in a difficult situation,” Olson said.

In 2020, there were 108 total drownings in the Great Lakes, with the most in Lake Michigan.

Dangerous currents, high waves and the failure to follow safety protocol are some of the reasons for the climbing numbers, said Dave Benjamin,co-founder and executive director of the nonprofit dedicated to water safety and drowning prevention in the Great Lakes.

The beaches can be closed now by the DNR, but only in emergencies. Olson said that the proposed rule revision would give officials the option to act quickly when water conditions get dangerous, as they have over recent weeks during turbulent weather.

The DNR’s proposal will be discussed on Thursday during the monthly Natural Resources Commission meeting, giving the public body a chance to comment and seek public feedback since it involves a change in state land use. The DNR has jurisdiction over the shoreline, not the water.

The Michigan United Conservation Clubs is raising some concern about the DNR proposal, which can be authorized by Director Daniel Eichinger without legislative or Natural Resources Commission approval.  MUCC policy coordinator Ian FitzGerald is asking to share the organization’s opinions on it, saying in an online post to members that a decision could be a “slippery slope” for future department decisions.

Unclear, according to the MUCC, is whether the year’s Great Lakes deaths “were due to disregarding red flag warnings or if this order would have been applicable.”

“While MUCC does not have a decisive member policy on red flag days and beach access, our organization has many policies related to public land use, hours of operation and accessibility,” FitzGerald said.

The DNR has recently taken steps to better alert visitors to dangerous conditions or currents, including gates and electronic messaging boards at some beaches.

He also would like to see lifeguards on Michigan’s state-run beaches. 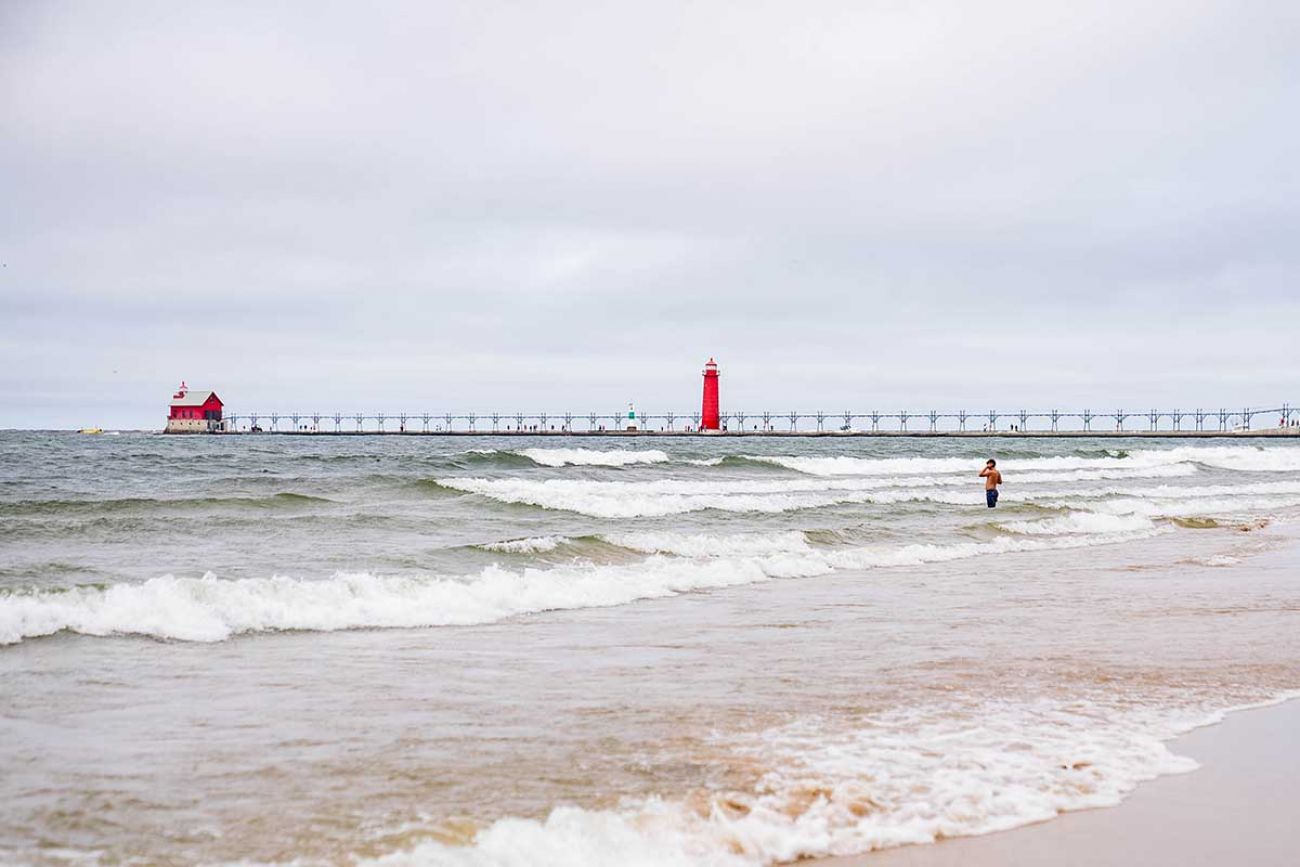 In 2020 several people had to be rescued from Lake Michigan after they were swept off of Grand Haven’s pier by the waves.(Bridge Photo by Daytona Niles)

“The lifeguards are the first responders at the water’s edge to respond to someone struggling in water and they make thousands of preventative actions to keep people from getting in trouble in the water,” Benjamin said.

Most beaches in Michigan do not have lifeguards, he noted.

Under the DNR’s beach flag system:

But Benjamin argues the “flag system or the electronic flag system is not a replacement for lifeguards. Those devices are actually tools for those lifeguards to use, and so essentially the flag system was never intended to be used without lifeguards.”

He also took issue with the state’s handling of the flag warnings.

“Conditions can go from green to yellow to red in less than an hour, and most of these beaches are not manning the flag system the way that it is intended to be used,” Benjamin said. “They need to use the flag system correctly for them to even get to the red flag.”

However, Olson, the state’s parks and recs chief, said lifeguards should not be expected to monitor all the beaches of the Great Lakes.

“We haven’t had lifeguards since 1993, and we don’t plan to have lifeguards,” Olson said. “It’s very difficult to do that. It’s difficult to staff them but the liability part was an issue for the state. We want people to take personal responsibility for what they do.”

As far as staying safe in the Great Lakes now, Benjamin urges individuals to eliminate the “false sense of security” they feel in the water. He believes there are many factors that play a role in the lack of water safety, and advises everyone to educate themselves.

“There’s not just one single thing (to look out for) when you go to the beach,” Benjamin said. “... We need to have a high sensitivity for caution around water.”

A video on Great Lakes safely was created by The Great Lakes Surf Rescue Project. Beach hazard risks are updated regularly by the National Weather Service.