But you wouldn't know it by watching Michigan’s first gubernatorial debate or studying  the campaign websites of incumbent Democrat Gretchen Whitmer and Republican challenger Tudor Dixon.

With the exception of a few traded jabs over the Enbridge Energy Line 5 petroleum pipeline and electric vehicles, mentions of environmental issues have been few in the race for governor, overshadowed by debates over abortion, inflation and school curricula.

“I wouldn’t say that the environment and climate are irrelevant,” said Barry Rabe, a University of Michigan political scientist who studies environmental issues. “But they're probably not as significant in an election where the candidates' positions are polar opposites on some of the big issues.”

While Dixon has decried too much environmental regulation as a hindrance to economic growth, Whitmer said she will focus in her second term on using laws and policies to protect people from pollution and address climate change — themes she prioritized in her 2018 campaign as well.

While Whitmer is endorsed by environmental groups, Dixon is backed by the Michigan Farm Bureau.

While Dixon views Enbridge’s Line 5 petroleum pipeline in the Straits of Mackinac as “critical infrastructure,” Whitmer calls it “a ticking time bomb” that threatens the Great Lakes.

While Whitmer has touted state incentives to lure electric vehicle battery plants and their “clean energy jobs” to Michigan, Dixon has criticized incentives and accused Whitmer during the pair’s Oct. 13 debate of trying “to force you into electric vehicles.”

Bridge questioned both candidates on key issues, and spoke with experts and interest groups about the candidates’ priorities. Here’s what we found:

The near-silence on environmental issues this campaign season stands in stark contrast to 2018, when water took center stage in Whitmer’s successful campaign against Bill Schuette.

With the Flint water crisis still fresh in mind, Line 5 politics raging, and the extent of Michigan’s PFAS contamination growing clearer everyday, voters across the state were anxious about the risks to their health, said Laura Schneider, a Grand Valley State University political science professor focused on environmental policy.

What changed? A global pandemic, deepening conflict over race, sexuality and gender identity, and a U.S. Supreme Court decision that reversed a decades-old right to abortion access.

“That’s one of the perils of environmental policy,” Schneider said. “Everybody wants clean water, clean air, and they don't want toxins leaching into their groundwater. But unless they are personally confronted with it, they just don't think about it.”

The issues themselves haven’t gone away.

As the world warms, Michigan is enduring worsening storms, warmer temperatures and more dramatic swings between periods of drought and flood.

In many cases, those hazards are bearing down on aging and inadequate infrastructure that cannot withstand such extremes. Such was the case last year, when summer storms over metro Detroit overwhelmed sewers that couldn’t contain such a large volume of water.

Experts say mitigating the harm from climate change will require a rapid shift away from fossil fuels and toward emissions-free energy. Meanwhile, infrastructure upgrades and changes in development patterns could help keep people out of harm's way amid worsening floods.

Whitmer has touted her climate plan as a response to those threats. The plan, released in April, calls for stronger renewable energy targets for power utilities, electric vehicle incentives and a new clean fuels standard, boosts to land and water conservation and other efforts to wean Michigan off fossil fuels by 2050.

But aspects of the plan, such as strengthening Michigan’s existing renewable energy standards, would require legislative action and Whitmer has rarely seen eye-to-eye on environmental matters with Republican leaders who control the Legislature. If she wins a second term, Whitmer said in an interview with Bridge, she would work with legislative leaders to “codify” the plan.

Whitmer said she would also rely on executive appointments to advance her climate goals. Her choices for the Michigan Public Service Commission, for example, have pushed the state’s utilities to transition away from fossil fuels. The commission also opted to consider climate impacts as a factor when deciding whether to grant key permits for Line 5, a first for the state.

“But those are not necessarily durable policies,” Rabe said. “They can end or be radically changed when partisan control changes.”

Dixon has signaled she would take a different approach.

Dixon has panned Whitmer’s climate plan while criticizing state incentives to lure EV battery manufacturing plants. If she wins office, Dixon has said she’ll review all state incentive programs over the past decade.

A spokesperson told Bridge that Dixon “believes that the climate is changing.” But she indicated that Dixon prefers a hands-off government approach to the issue, saying  “the private sector is leading the way.”

“Tudor will not jeopardize our economic future by capitulating to environmental radicals and countries like China that refuse to abide by similar regulations,” spokesperson Sara Broadwater said.

More than 54,000 miles of Michigan rivers and streams are deemed “impaired” by state and federal regulators for pollution ranging from farm runoff of fertilizer and manure to legacy industrial contaminants, while Michigan’s list of PFAS contamination sites now stands at 247.

The candidates have opposing views on how Michigan should tackle pollution issues. Take, for example, the agricultural pollution that fouls Lake Erie, Saginaw Bay and many inland lakes and rivers.

The Whitmer administration has taken small steps to curb pollution from farms and feedlots, such as adopting regulations to curb factory farm manure pollution in Michigan waterways and declaring the Saginaw Bay “impaired” by nutrient pollution.

Dixon has panned such efforts as bad for business, arguing in September in a Farm Bureau publication that farmers care for the environment “better than any bureaucrat ever could.”

Dixon has decried environmental regulations as “a hindrance to growth” of Michigan’s businesses and has vowed to cut, reduce or streamline 40 percent of state regulations during her first term. Dixon did not make herself available for an interview with Bridge, and her spokesperson declined to specify which regulations Dixon opposed.

“Regulators are hostile to business and that must change,” Broadwater said in an email to Bridge.

Instead, Dixon wants the Michigan Department of Environment, Great Lakes and Energy and other government agencies to view the industries they oversee as customers rather than adversaries, saying in the Farm Bureau article that “farmers, producers, and processors don’t work for them, it’s the other way around.”

Calling Dixon’s deregulation vow a “talking point” lacking specifics, Whitmer cited the water crises in Flint and Benton Harbor as examples where Michigan “saw some of the most dire impacts on communities where the work of protecting (the public) wasn't as front and center as it should be.”

She has cited new pollution policies as points of pride for her administration, pointing to examples such as PFAS drinking water standards that make Michigan among the nation’s most aggressive states in limiting allowable amounts of the contaminants in drinking water supplies.

Mike Alaimo, director of environmental and energy affairs with the Michigan Chamber of Commerce, said “it’s tough to know what that means” regarding Dixon’s deregulatory promise. But he said his group agrees that government regulators at times have hindered business growth, citing as an example a permitting dispute surrounding a proposed asphalt plant in Flint.

Lisa Wozniak, executive director of the Michigan League of Conservation Voters, which has endorsed Whitmer, criticized Dixon’s deregulatory push as “an affront to Michiganders” while praising Whitmer for strengthening Michigan’s environmental oversight.

Drinking water infrastructure has gotten little attention on the campaign trail. But it remains a huge issue in communities across the state, as Bridge Michigan and its reporting partners highlighted in the “Water’s True Cost” series this year. 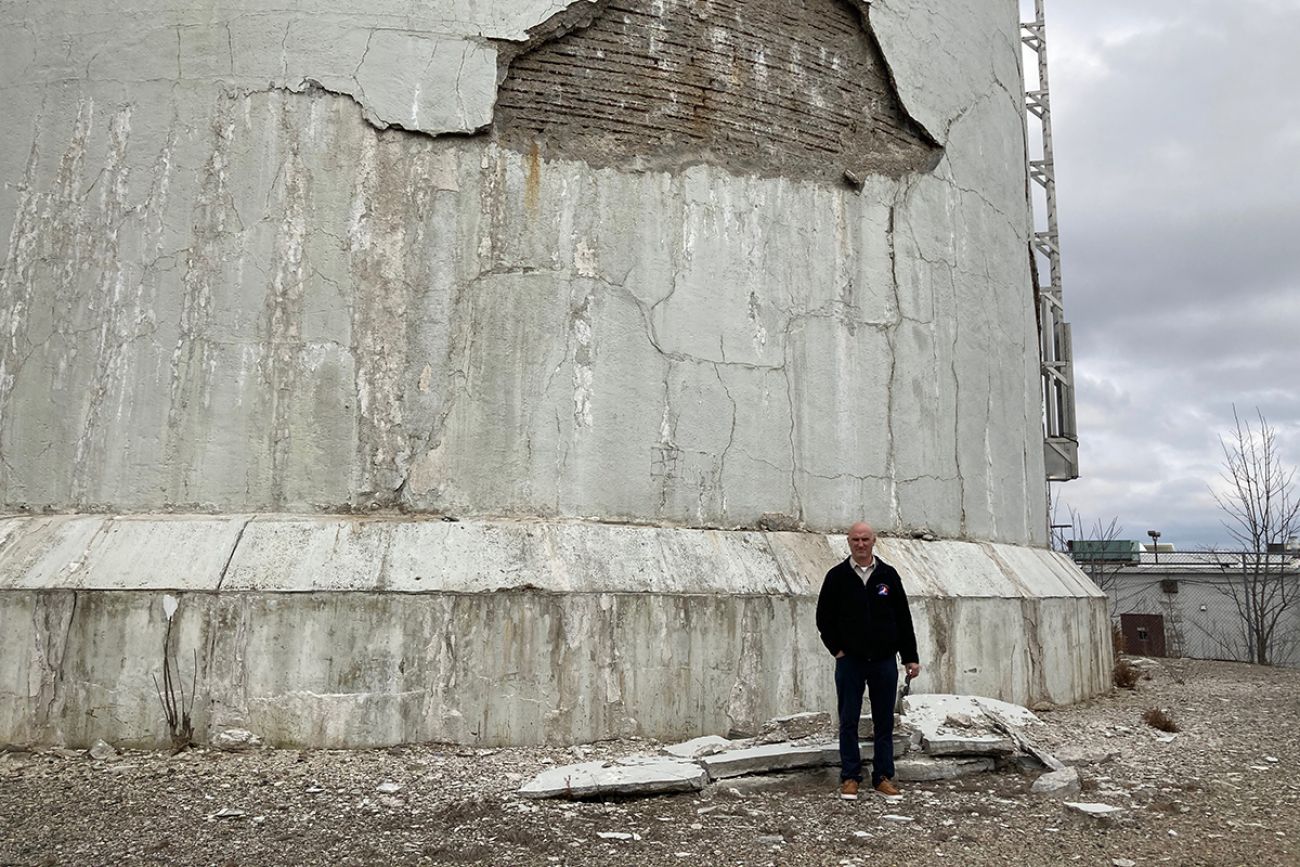 Bill Hunter stands beneath a crumbling South Haven water standpipe that was due for replacement 20 years ago. Water systems across the state are struggling with aging and inadequate pipes and treatment systems. (Bridge photo by Kelly House)

Regardless of who takes office, “that number is going to go up,” said John LaMacchia, assistant director of state and federal affairs for the Michigan Municipal League.

That’s because Michigan is still sitting on billions of federal infrastructure dollars it has yet to allocate.

Still unclear is how and whether Michigan will find new money to fund Michigan’s drinking water needs beyond 2026, the deadline for states to spend their federal infrastructure windfall. Whitmer has called upon the legislature to work with her to identify sustained funding, while Dixon has advocated for “public-private partnerships and other innovative financing mechanisms.”

The petroleum pipeline in the Straits of Mackinac has long been a hot-button Michigan environmental issue.

Citing fears of a catastrophic oil spill in the Great Lakes, environmental groups want the pipeline, which runs along the sandy bottom of the straits, to be shut down immediately. Enbridge wants to keep using the pipes until it can replace them with a new pipe buried in a tunnel deep underground.

Whitmer, who vowed to shut down the pipeline during her 2018 campaign, has tried but so far failed to do so. After the pipeline sustained “significant damage” following an anchor strike in 2020, Whitmer ordered Enbridge to stop pumping petroleum across the straits, but the company has defied the order and a judge has yet to settle the resulting legal dispute.

Dixon has repeatedly criticized Whitmer’s approach while arguing that the pipeline is safe, and should stay open. Disrupting fuel shipments through the line, she argues, would be “catastrophic for Michigan’s economy,” causing gas prices to skyrocket and abandoning residents, including many in the Upper Peninsula, who use propane from the pipeline to heat their homes.

“Tudor believes Line 5 is safe and its safety will only be increased with the proposed tunnel,” Broadwater said. “Gretchen Whitmer has grandstanded on that vital piece of Michigan infrastructure, which provides energy for so many Michiganders.” 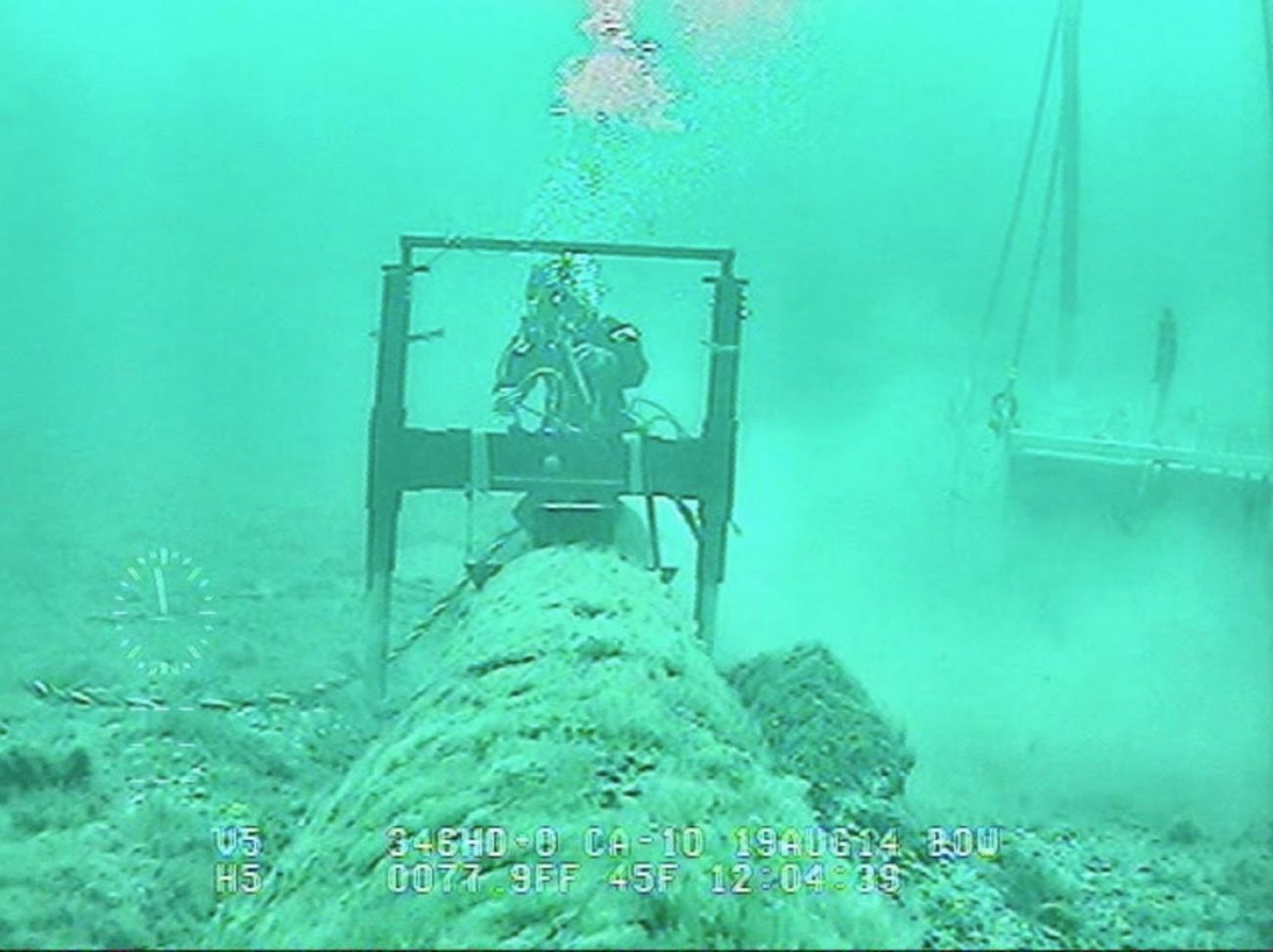 Experts have offered a range of estimates regarding how a Line 5 shutdown would affect gas prices, from several cents-per-gallon to less than a penny. And while state-hired consultants found it’s possible to shut down the pipeline with minimal impacts on propane prices, it would require investments in other shipping options, such as truck and rail, that have yet to fully materialize.

Whitmer told Bridge she continues to favor a quick shutdown.

“We’ve got to get that out of the water,” she said of the 67-year-old pipeline. “It’s not a question of if it will fail, it’s a question of when.”

But Whitmer acknowledged the matter is largely out of her hands as a federal judge weighs the pipeline’s fate and the Biden administration negotiates with Canadian officials over an international treaty governing the pipeline.

Whitmer has avoided endorsing or condemning the tunnel project, saying instead that state agencies are “moving swiftly” to consider whether Enbridge qualifies for key permits.

The fate of the tunnel, too, is partly out of the state’s hands: Enbridge needs both state and federal permits for the tunnel, and the U.S. Army Corps of Engineers expects to take another two years deciding whether to grant them.