Why are so many Michigan water systems finding lead? They're looking harder

Michigan Environment Watch
Why are so many Michigan water systems finding lead? They're looking harder

Since the southwest Michigan community’s prolonged lead-in-water crisis began making national headlines this fall, residents of Hamtramck, Wayne and Manchester have all learned that their water, too, exceeded government lead standards, sparking renewed cries for faster action to eliminate the toxic metal from Michigan’s water systems.

But while residents are newly on-notice about the threat of lead in their water systems, the threat itself is nothing new. It’s just newly known to the public, the result of a rule change that forced water suppliers to start looking harder for the neurotoxin in their water delivery systems starting in 2019.

“Nothing’s really changed but the testing standards,” said Jeff Wallace, village manager for Manchester, where 89 of some 800 households have a lead-containing service line.

The four communities currently in violation of Michigan’s lead-in-water standard are among dozens across the state that have been flagged for high levels of lead since the new rules took effect.

And with hundreds of water systems — from whole towns to small retirement centers — still awaiting their first water test results since Michigan’s rules changed, the list could keep growing.

If you haven’t used your water for several hours (such as first thing in the morning), flush pipes for five minutes to clear stale water that may have absorbed lead while sitting in pipes. You can flush pipes by taking a shower, doing a load of laundry, running the dishwater, or simply letting faucets run.

Consider using a filter to strip lead away before taking a drink. Faucet filters or pitcher filters are both effective, so long as they’re certified to strip away lead and particulates.

Clean faucet aerators every 6 months (or more frequently) to remove lead that may have collected in the aerator’s mesh screen.

Not sure whether your home is serviced by a lead line? You can check this database to find out how common they are in your community, call your water supplier to ask whether a lead line services your home, or follow these tips to see for yourself.

Passed in the wake of the Flint water crisis, the rules aimed to more nimbly address a powerful neurotoxin that plagues Michigan’s water supplies, hides in the paint on old houses, and lingers in the soil as a legacy of the leaded gasoline era, putting people at risk for problems ranging from sluggishness and weight loss to premature birth and learning delays.

No amount of lead is safe to ingest, though Michigan water supplies are flagged for a violation when 10 percent or more of water samples collected test over 15 parts per billion. That threshold will drop to 12 parts per billion in 2025.

Heralded as the nation’s strictest at the time, Michigan’s new rules required operators to target homes with known lead pipes or fixtures. Under old rules, operators had more liberty to decide where they pulled samples, which made it less likely they would detect lead risks.

The new rules also require operators to test both the first and fifth liter of water coming out of the tap, making it more likely that samples will uncover lead leaching out of old service lines that deliver water from public water mains into residents’ homes.

Under the old rules, operators were required to test only the first liter — a tactic that might spot problems caused by lead-containing faucets inside homes, but is unlikely to spot contamination coming from the public pipes that deliver water into homes.

And in Michigan, which has among the highest rates of lead service lines in the country, it meant lead problems were more likely to go unnoticed.

The new protocol, said Eric Oswald, director of the Michigan Department of Environment, Great Lakes and Energy’s drinking water and environmental health unit, “is exposing that lead exposure that we thought might be there.”

Both Hamtramck and Wayne, for example, would not have violated Michigan’s lead standard if they had continued using the old testing method.

State data shows that since the new testing protocols took effect, 43 Michigan water systems have been in violation of Michigan’s lead standards — some of them repeatedly. That marks a 48 percent increase over the preceding three-year period.

Recent violators have included mid-sized cities like Royal Oak, small towns like Clare and tiny suppliers including an apartment complex in the Upper Peninsula town of Hermansville that has failed six lead tests since 2016.

And not all violations carry an equal public health threat: In Royal Oak, for instance, less than six percent of households get their water from a lead line. In Hamtramck, by contrast, it’s closer to 90 percent.

The uptick in violations “shows you the extent to which people were just completely clueless” about lead risks in their water systems before Michigan’s new rules forced more public disclosure, said Elin Warn Betanzo, a water engineer and former EPA official who now runs the consulting firm Safe Water Engineering.

“They had no information coming to them, and there was no requirement for water systems to even know where lead service lines were,” Betanzo said.

Some 350 Michigan water systems, from Baldwin to White Cloud to a host of apartment complexes and subdivisions, just completed their first round of sampling since the new rules took effect. Results will roll in over the coming weeks, meaning Michigan could soon see even more exceedances.

To be clear, Benton Harbor’s chronic lead problems are a different category: They showed up before Michigan’s testing protocol changed, and have continued unabated in the three years since, even after officials began infusing the water with anti-corrosion chemicals meant to keep lead from leaching out of pipes.

State officials have said the chemicals are working, but it will take time to bring lead levels down below the legal limit.

But as Hamtramck and Wayne make clear, those chemicals are not a silver bullet. Both cities get their water from the Great Lakes Water Authority, which has long injected anti-corrosion chemicals into its water.

Oswald, of EGLE, said the agency is now working with the authority to tweak its chemical formula in hopes that it will become more effective.

In addition to ramping up testing, the new rules put every Michigan water supplier on a 20-year deadline to eliminate lead lines from their distribution system, with more aggressive timelines for those with violations that aren’t fixed by treating the water with chemicals designed to prevent lead from leaching out of pipes.

But the wave of recent violations has prompted renewed calls for state leaders to chip in money so communities with lots of lead lines can move faster to get the lead out.

Michigan has more than 1,000 public water systems, many of which have at least some lead pipes.

Water suppliers have been banned from installing new lead lines since 1986, meaning older communities tend to have the most lead service lines. And because many of Michigan’s oldest cities have also steadily lost population to the newer suburbs, many of them face shrinking revenues. That makes it difficult to eliminate lead lines that can cost $5,000 or more apiece to replace.

Water suppliers have long decried the state’s lead line replacement directive as an unfunded mandate and urged lawmakers to chip in state money to help cover the cost. The recent wave of violations has renewed those cries.

Hamtramck, where nearly half of its 28,433 residents live in poverty and the city only recently emerged from state-appointed emergency management due to budget woes, must find the money to remove thousands of lead lines. At the current rate, City Manager Kathy Angerer said, it will take more than a decade.

She’s counting on state lawmakers to free up money for Hamtramck like they did for Benton Harbor after activists complained to the EPA last month that Michigan was not adequately responding to the southwest Michigan city’s three-year-long lead crisis.

“The expedited plan for Benton Harbor,” Angerer said, “is the right plan for other communities.”

Flush with billions of federal COVID-19 relief dollars and more on the way if Congress passes a pending federal infrastructure spending bill, state lawmakers on both sides of the aisle say they hope to heed the call.

Spending proposals from both parties contain sizable chunks of money to help local communities replace lead pipes, including $600 million in a Republican proposal sponsored by Sen. Jon Bumstead, R-Newaygo, and $200 million in a September proposal from Gov. Gretchen Whitmer.

Many local communities are also sitting on sizable pots of stimulus money from the federal American Rescue Plan Act that could be spent on drinking water infrastructure, but are hesitant to spend the money on priorities that might be ripe for state or federal investment.

Abby Mitch, spokesperson for Senate Majority Leader Mike Shirkey, R-Clarklake, said she expects Bumstead’s bill to move out of committee “pretty quickly,” but didn’t offer a timeframe for when it could receive a full Senate vote.

Lawmakers will also have to reconcile the Senate proposal with Whitmer’s proposed budget, but Mitch noted that Republican legislators and the Democratic governor “generally agree” on how the money should be spent.

Calling the lead-in-water crisis in Michigan cities “an infrastructure crisis that is decades in the making,” Whitmer spokesperson Bobby Leddy told Bridge Michigan this week that Hamtramck also is eligible for $3 million from the state Drinking Water Revolving Loan Fund to get a jump on removing its lead pipes.

The ongoing water quality violations in Manchester and Wayne are somewhat less-urgent: Fewer than 1-in-9 homes in those communities are connected to lead lines.

Beyond the state funding proposals, Congress could vote this week on a $1.2 trillion infrastructure spending bill that includes $15 billion for lead service line replacement. The draft of a separate $3.5 trillion budget reconciliation bill includes another $30 billion to remove lead lines, though lawmakers are expected to shrink the bill to as little as $1.5 trillion in order to secure enough “yes” votes to pass it.

The savings are far greater if lead line replacement is combined with efforts to abate lead paint, which is the common source of childhood lead exposure, particularly in cities with older housing stock. (Lead paint was banned in the U.S. in 1978.)

At least one lawmaker is calling upon Michigan legislators to include lead paint abatement among their priorities for spending Michigan’s stimulus dollars.

Rachel Hood, D-Grand Rapids, is cosponsor of a 10-bill package that aims to boost childhood lead screening in Michigan, require physician training on how to treat lead exposure and require lead paint inspection when older homes are sold, among other provisions.

“As a society we have some important questions to ask,” Hood said. “It makes absolutely no sense to avoid these investments when we know what the costs are down the road.” 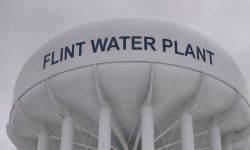 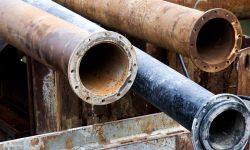 Check this Michigan map for childhood lead levels in your community