Despite fears, Michigan election passes without intimidation or interference

FLINT—After fears of Election Day “violence and disruption” in Michigan, and signs that far-right activists were mobilizing as poll workers and election challengers, officials were relieved to see that those threats didn’t materialize.

There were no major reports of conflicts as of late Tuesday night. Even the polling place glitches and delays voters saw in other states were rare in Michigan.

Like most cities around the state, Flint prepared for the worst and instead experienced an election that appeared — under the direction of a brand-new replacement for the city clerk — to have gone off smoothly.

Inside Flint’s counting room for absentee ballots on the third floor of City Hall, there was constant scrutiny from partisan poll challengers late into the night but no disruptions. The clerk and her staff worked into early Wednesday morning, past 1 a.m., to count thousands of absentee ballots as some 10 Republican challengers and two Democratic challengers watched.

The GOP challengers identified themselves as members of the Michigan Republican Party, but declined to comment further. A staff member said two ACLU attorneys were also among those watching the process.

Most times during the night and into the morning, the GOP challengers milled about the two dozen election workers. At one point one of them, a young man, pulled up a chair within about four feet of two female workers to watch them sort and examine absentee ballots. (Michigan election rules forbid challengers from getting too close to election workers or election materials to avoid disruption of the election workers’ duties.)

Interim Flint City Clerk Davina Donahue said there were no confrontations and no major challenges during the process. Donahue didn’t have information late Tuesday that any absentee ballot was rejected as the result of inquiries or potential challenge of one. 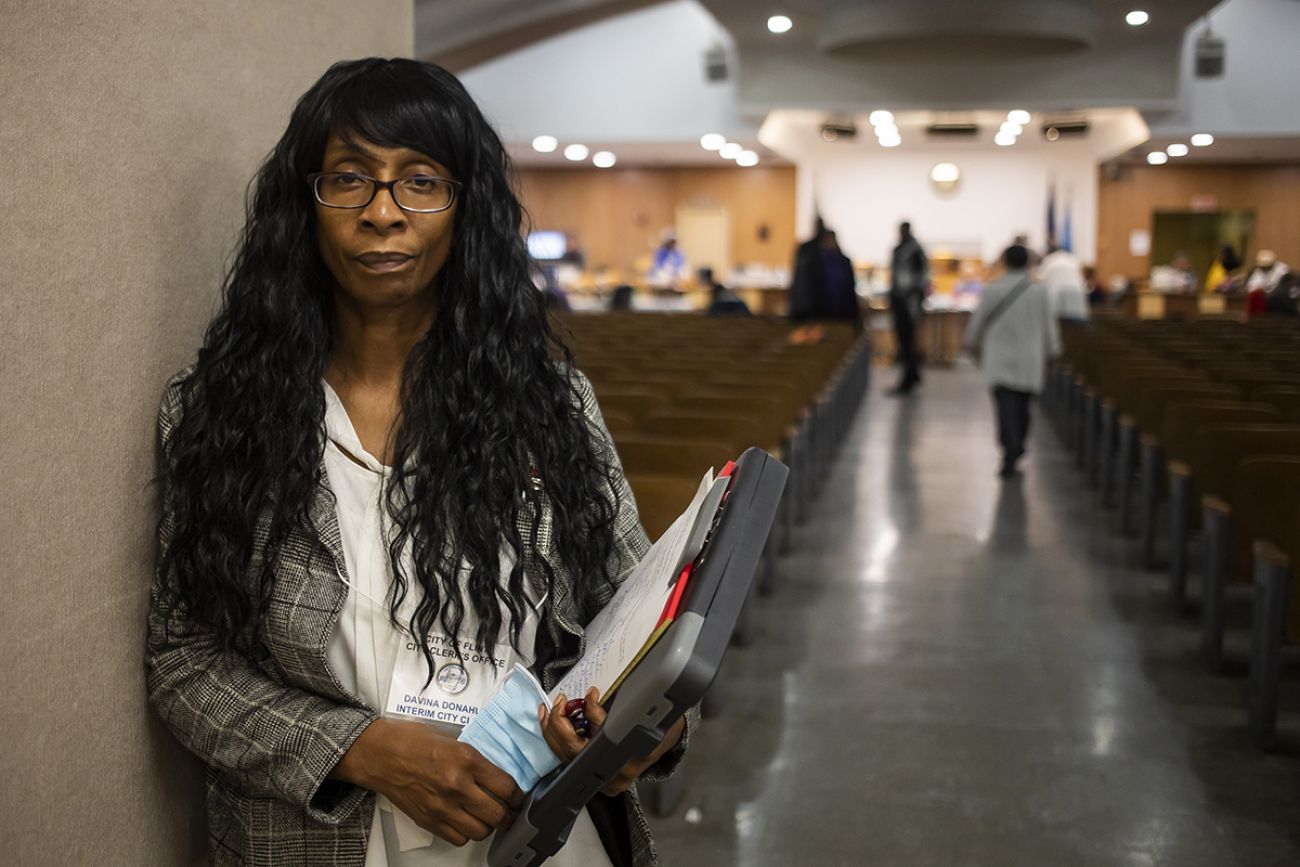 Flint NAACP President Frances Gilcreast, one of the election observers in the room, said she was there to make sure everyone’s vote was protected and treated fairly, stressing that ruling on a challenge to a ballot must be done fairly. Poll observers, who have a less-involved role than challengers in Michigan, also watched the counting.

“You don’t just throw out a ballot because someone challenges it,” said Gilcreast.

Also closely watching voting in Flint on Election Day were federal monitors from the Department of Justice. In Michigan — one of 24 states where monitors were dispatched — the agents also visited Detroit, Southfield, Pontiac, and Grand Rapids, on the lookout for possible voter intimidation.

The two DOJ monitors, a man and a woman, stopped by Flint City Hall to meet with Donahue before they headed out to two precincts in the city.

“Voter intimidation was their main focus,” said Donahue. “They thought people were going to be at the polls trying to intimidate voters.”

Donahue and her staff worked past 1 a.m. to count Flint’s 7,500 absentee ballots, out of 10,000 requested. Despite the frenzy of election and challengers steadily coming

Donahue was running her first election since becoming interim clerk barely a month ago. She said it was a “baptism of fire” for her.

After working in the clerk’s office since 2006, most recently as deputy clerk, she took over the elections duties after the retirement of longtime clerk Inez Brown in September. Now Donahue is seeking to be named permanently to the job by the Flint City Council, which means participating in a lengthy selection process that begins Wednesday.

Across Flint, voters like Wantwaz Davis went to polling places and cast their vote without reporting hassles or trouble.

Davis, the owner of a custodial company, said he hopes everyone is inspired to vote and realizes the privilege of doing so.

For Doug Hodo, voting in-person is a tradition and he was happy it was effortless Tuesday.

Like Davis, Hodo voted at the Doyle-Ryder Elementary School on Saginaw Street.

“I like to see all the other voters,” said Hodo of deciding to cast his vote at a polling site instead of by absentee ballot.

A steady stream of voters filled the gymnasium at Doyle-Ryder. Endia Crowder, a reading interventionist  at the Burton Glen Charter Academy, said she couldn’t let Election Day go by without doing her “citizen’s duty.”

“I respect my right as a U.S. citizen,” Crowder said as she headed into the school to join other voters.

Donahue said she heard from precincts that voter traffic seemed particularly high in the city but did not have exact turnout numbers Tuesday.

The only notable blot on Flint’s otherwise quiet Election Day was an allegedly drunk and disorderly election worker.

Police were called to Haskell Community Center on Forest Hill Avenue around 7:30 p.m. Tuesday on a report of a poll worker “who appeared to be intoxicated,” said Flint Police Chief Terence Green wrote on the department’s Facebook page.

When police responded to the polling site, they were told that the poll worker had fled on foot, leaving his bicycle. Then the worker returned once police left and made violent threats, Green said on Facebook. Police came back and took the man into custody.

This article is made possible through Votebeat, a nonpartisan news organization covering local election administration and voting. Votebeat will make this article available for reprint under the terms of its republishing policy.