Gov. Whitmer sworn in for second term: 8 issues to watch in 2023 in Michigan

Michigan Government
Gov. Whitmer sworn in for second term: 8 issues to watch in 2023 in Michigan

“In November, Michiganders spoke with a clear voice,” Whitmer said during her inauguration ceremony outside the state Capitol building in Lansing.

“They expect us to embody the values they live up to every day — grit and grace. They deserve practical problem solvers who get things done.”

Whitmer’s first four years in office were checkered by clashes with Republicans who controlled the Legislature. Many of her policy priorities were dismissed outright, while others resulted in stalemates with Republicans, who accused her administration of being uncooperative.

Speaking at the inauguration, Whitmer said she hopes Democrats and Republicans can come together to “make Michigan a place where all people can envision a great future.” 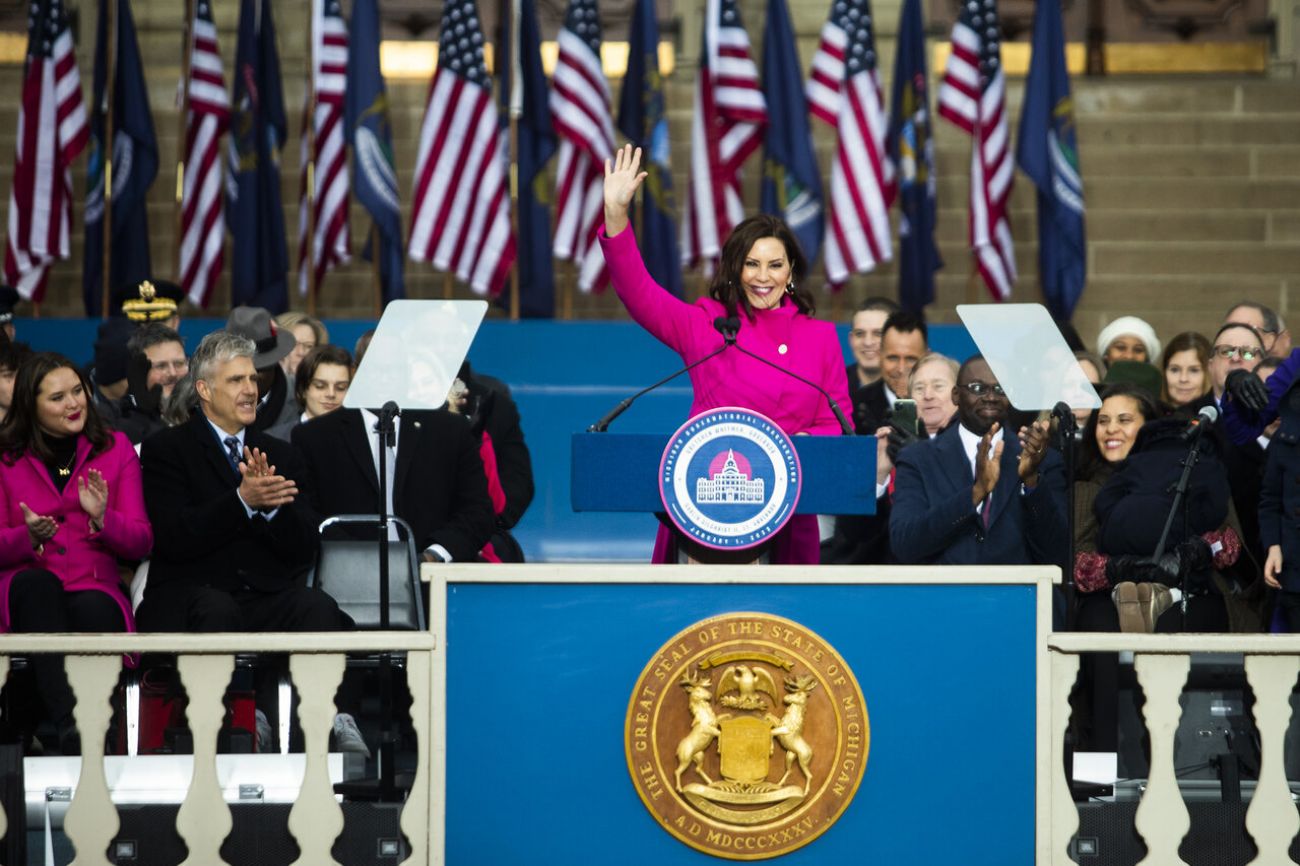 Gov. Gretchen Whitmer waves to supporters during her inauguration outside the Michigan Capitol in Lansing on Sunday. (Bridge photo by Katy Kildee)

“Over the next four years, we will dig deep and get things done,” she said. “It’s what Michiganders do.”

Whitmer built a national profile during her first term as governor, and many in the national media have identified her as a possible presidential candidate in 2024 should Democratic incumbent Joe Biden opt against seeking re-election, Whitmer recently told Bridge she is committed to “enthusiastically” serving out her full second term.

Despite Democrats controlling both chambers of the Legislature, major changes may prove tricky for Whitmer and lawmakers.

Majorities in both chambers are slim — Democrats outnumber Republicans 56-54 in the House and 20-18 in the Senate — and lawmakers of both parties were elected in districts made more competitive during the redistricting process. That means any tough votes could leave many lawmakers vulnerable to challengers during their re-election campaigns.

“The good thing that we have is that we’re in charge of the agenda, so it doesn’t necessarily have to come to the floor if it’s going to be bad for our marginal members,” she said recently on WKAR-TV’s “Off the Record.”

“We have a very cohesive, understanding caucus, so we will be working together and making sure that we retain majority.”

Democrats anticipate getting new committees up and running in January, and the Whitmer administration will give her State of the State speech and outline her budget priorities in the next several weeks.

Here’s a look at some of the priorities of Whitmer and Democrats this year:

At the top of nearly every incoming Democratic list is repealing the state’s “Right to Work” law, which was approved by Republicans in 2012 and allows workers to opt out of paying dues in union-represented jobs but still receive benefits.

Right-to-Work policies are deeply unpopular with unions, who are key donors to Whitmer and legislative Democrats. 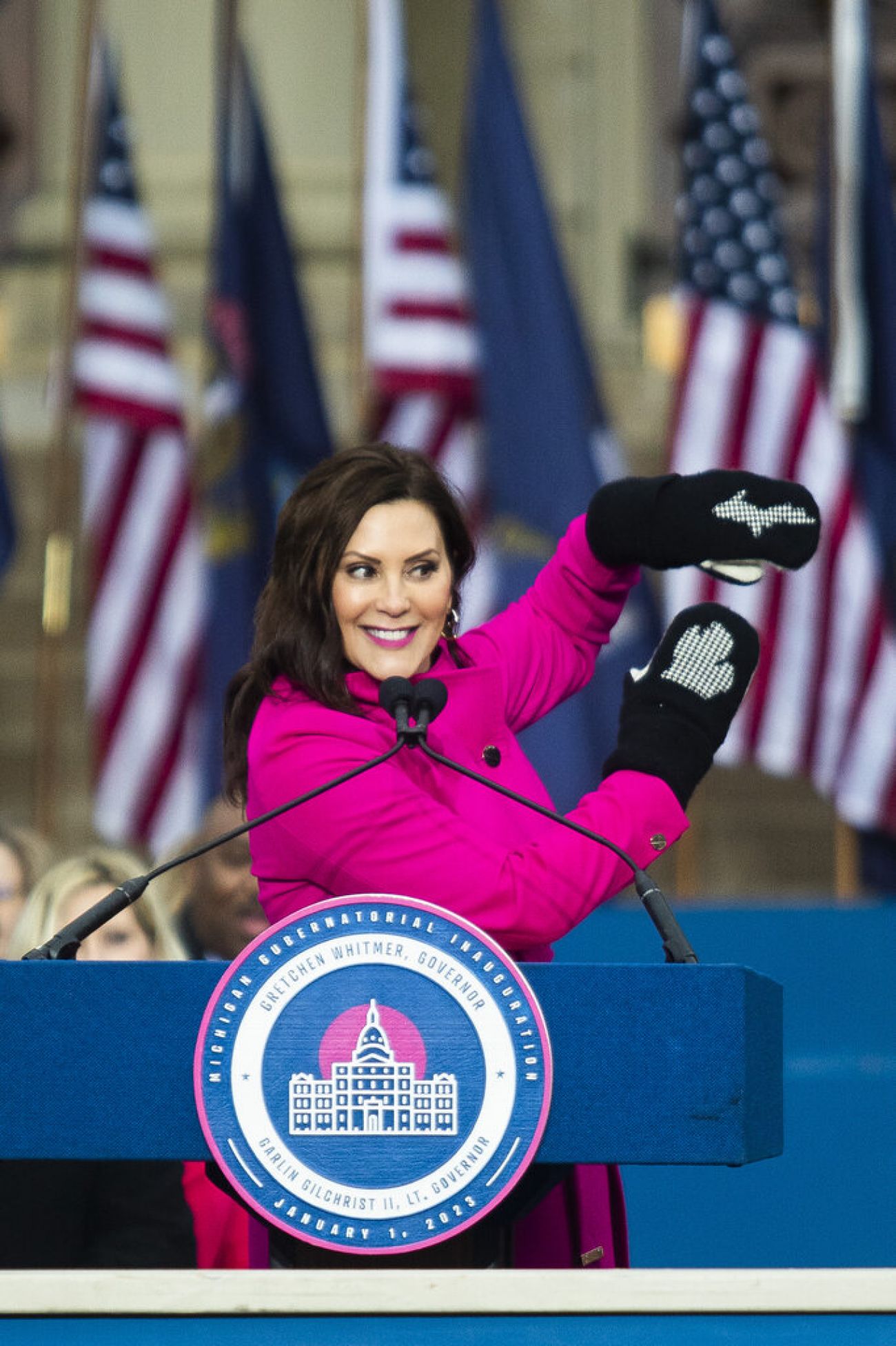 Gov. Gretchen Whitmer shows off her Michigan-themed mittens during her second inauguration on Sunday. (Bridge photo by Katy Kildee)

Business groups argue Right-to-Work is good for attracting jobs, warning a hasty repeal could send the wrong message to companies considering investing in Michigan and undermine a recent $5 billion investment by the state to attract large-scale development.

The data is unclear as to whether repealing Right-to-Work would hamper economic development, but the law has had a direct impact on union participation. Since the law was passed, the percentage of Michigan’s 4.85 million workers covered by a union contract has declined to 15.4 percent in 2021 from 17.2 percent in 2012.

Gun control never had a chance with Republicans. Democrats are brimming with ideas.

Among them: universal background checks, safe storage laws with a focus on keeping guns out of the hands of children and “red flag” laws, which would allow someone’s gun to be taken away temporarily if they are deemed dangerous to themselves or others.

The push in Michigan and other states to enact stricter parameters around access to guns is motivated by a rise in mass shootings: Of the 172 from 1966 and 2019, more than half have been since 2000, and 20 percent were from 2010 and 2019, according to The Violence Project, funded by the U.S. Justice Department.

Whitmer says she will push for tax relief plans tailored to seniors and low- and middle-income workers.

She wants to expand the state’s Earned Income Tax Credit, a refundable credit for low-income families. Michigan families who qualify can now receive 6 percent of their federal credit from the state, adding about $130 to $150 atop the average federal credit of $2,500.  Michigan’s credit had been 20 percent until 2012, and Democrats are seeking a return to that threshold.

Whitmer supports eliminating the so-called “retirement tax” by exempting more senior income from the state’s 4.25 percent income tax. Pensions were not taxed by the state until 2011, and Democrats argue the current policy is unfair to seniors who retired without realizing their fixed income would be taxed. 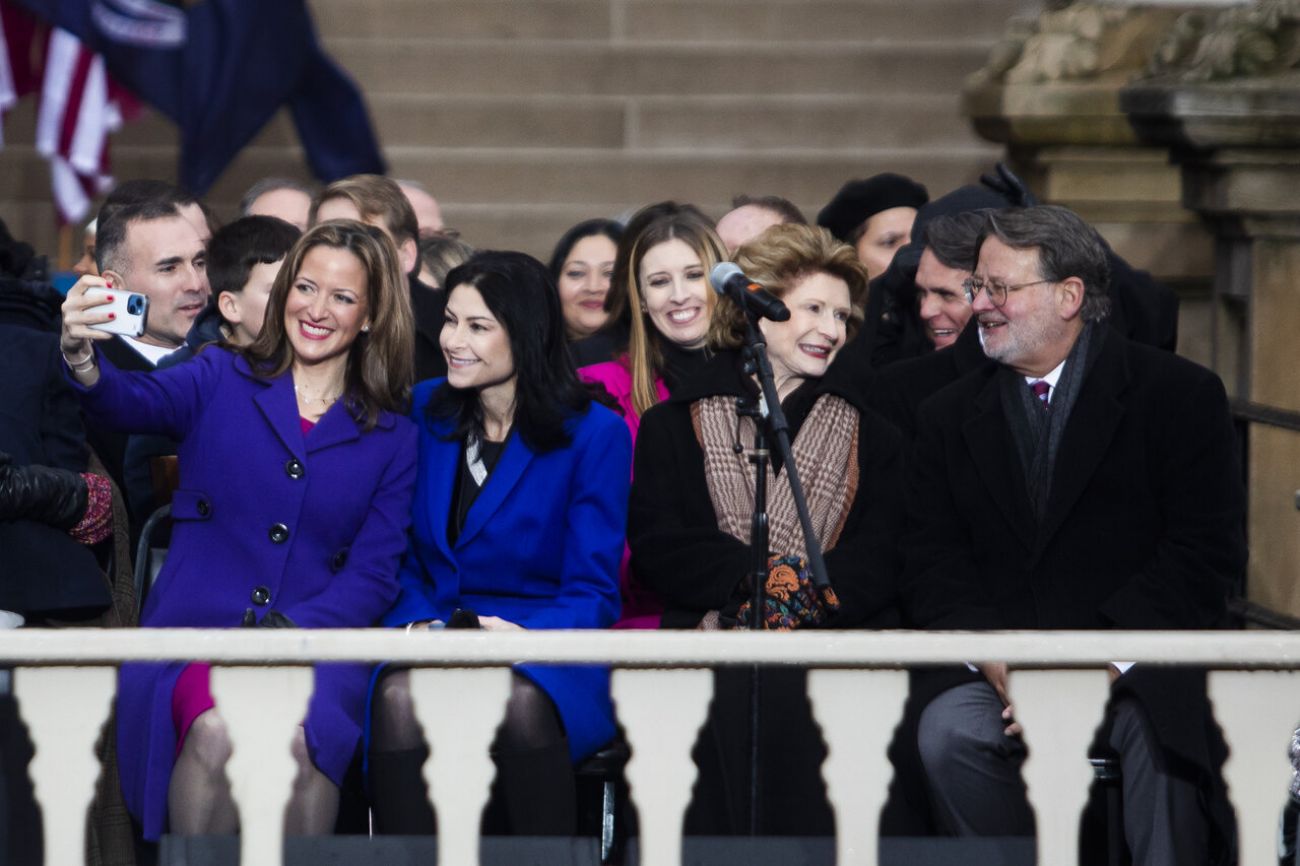 Secretary of State Jocelyn Benson snaps a selfie with Attorney General Dana Nessel, as Michigan U.S. Sens. Debbie Stabenow and Gary Peters watch on during the inauguration of Gov. Gretchen Whitmer on Sunday. All are Democrats. (Bridge photo by Katy Kildee)

Combined, those plans would benefit more than 1.2 Michigan families. About 700,000 households would be in line to save more than $300 annually under an expanded Earned Income Tax Credit (EITC), while about 500,000 retirees would save about $1,000 per year in pension taxes.

The changes would reverse policies enacted under former Gov. Rick Snyder’s administration and would cost the state about $757 million per year in revenues, according to projections from Whitmer’s office.

Voters in November approved Proposal 3 enshrining abortion rights in the Michigan Constitution, and Democrats could make other changes to reproductive policies and funding.

Lawmakers will also have to determine whether to revisit other abortion-related laws on the books, such as the 24-hour waiting period currently required between an abortion consultation and the actual procedure or laws requiring parental consent for minors seeking an abortion unless the minor successfully petitions their case to court, should be revisited.

Proposals to increase access to abortion around the state could also be on the table. Michigan is poised to become a destination for those seeking to terminate pregnancies, as nearby states have severe restrictions or bans on the procedure.

Michigan’s Legislature has long been controlled by Republicans, who by and large support the state’s additional requirements and current restrictions on abortion procedures. Efforts to go beyond what was outlined in Proposal 3 will likely see staunch opposition from anti-abortion advocates. 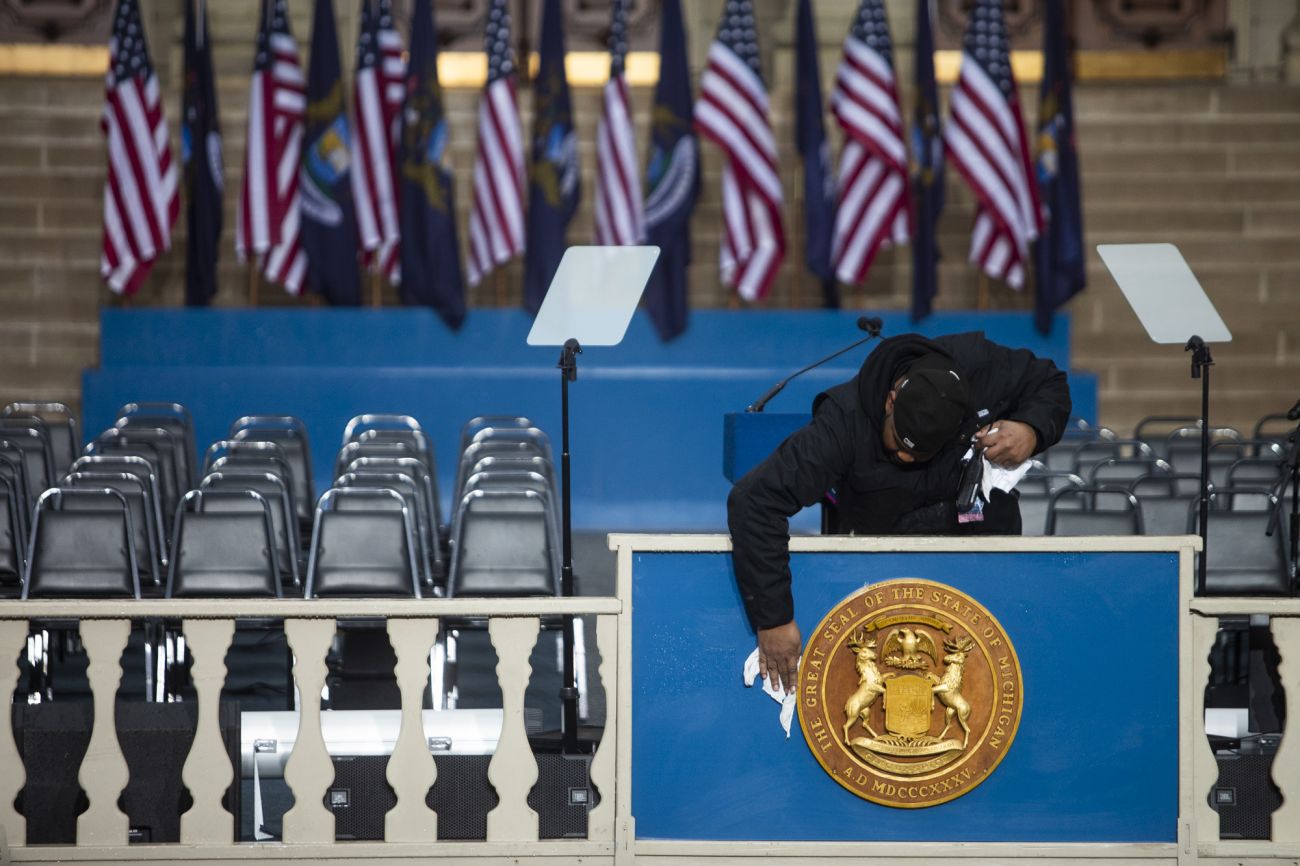 A worker puts finishing touches on cleaning the Great Seal of Michigan on Sunday, before inauguration festivities began that day outside the state Capitol in Lansing. (Bridge photo by Katy Kildee)

With her party in power in the Legislature, she’d like to see those plans passed into law, although it’s unclear where environmental and energy issues fall on the administration’s and Legislature’s priority lists.

Environmental groups want to boost the administration’s call for 2 million electric vehicles by 2030, update the state’s renewable energy standard, incentivize residents to make climate-friendly changes, prepare for extreme weather events and address some of the concerns about wind and solar siting that have cropped up at the local level.

Top of the to-do list for education activists: repealing or changing a controversial law that requires students who test more than a grade behind in reading to repeat the third grade.

Democrats have long argued that policy is unfair, and researchers at Michigan State University found Black and low-income students were more than twice as likely to be held back compared to their white and wealthier peers.

The law has several exceptions that let students avoid retention, and this fall, only 545 students of the nearly 5,700 students eligible for retention were actually held back.

Republican lawmakers argue the law holds schools accountable to making sure their students know how to read.

One of Whitmer’s key campaign promises was to siphon additional money towards fixing roads, bridges and other critical infrastructure.

That’s still on the list. Currently, the main source of funding for road repairs is the gas tax — experts say that’s not enough to boost road quality long term, and many fear the rise of electric vehicles could further erode available funding without reducing the wear and tear on roads. 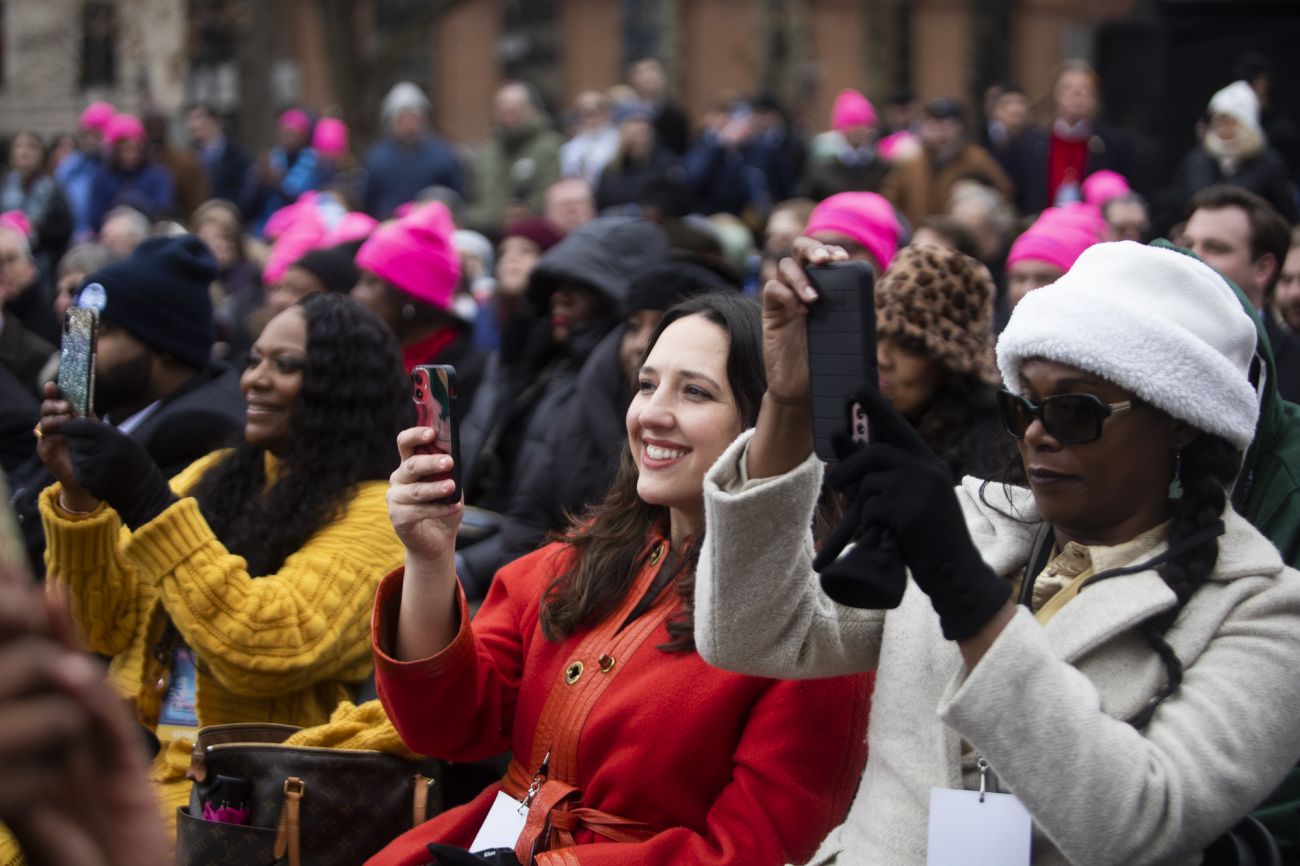 One possibility is a “road usage charge” that would tax drivers on vehicle miles driven. The Michigan Department of Transportation is also in the process of conducting a tolling study requested by the Legislature to determine whether tolling on major thoroughfares is feasible in Michigan.

Whitmer unsuccessfully sought to raise fuel taxes during her first term, but she recently told Bridge she has no plans to try that again.

Whitmer recently told reporters she’s committed to reforming the state’s public records laws and lobbying rules despite failing to address those issues during her first term.

She said she’d like to see the state’s Freedom of Information Act be “equally applied” to lawmakers and the executive branch, all of which are currently fully exempt from public records requests. Whitmer also said she wants to close loopholes in state lobbying laws, particularly in the aftermath of allegations that former House Speaker Lee Chatfield, R-Levering, favored certain special interests while in office.

Michigan is one of only two states that prohibit the public from requesting records from both the Legislature and governor’s office. Whitmer has not yet honored her 2018 pledge to open her own office up to public record requests if the Legislature did not change the law.

The Republican-led House last year again advanced legislation that would have subjected the governor’s office to FOIA and created a new and separate transparency law for the Legislature. But negotiations stalled in the Senate, where outgoing Senate Majority Leader Mike Shirkey, R-Clarklake, opposed making communications between constituents and lawmakers public.

Whitmer, though, could have voluntarily opened her office to the Freedom of Information Act without assistance from lawmakers but did not do so during her first term.

Editor's note: This story was updated at 9:15 a.m. Jan. 2 to update a photo caption that misidentified U.S. Sen. Debbie Stabenow.