DETROIT — Retiring Detroit Police Chief James Craig has not declared himself a candidate, but Republican Party insiders say his “law and order” bona fides would make him a formidable challenger against Democratic Gov. Gretchen Whitmer next year.

Since 2013, Craig has presided over one of the most violent and liberal cities in the country — one hit hard by COVID-19, which he contracted last year as his department enforced Whitmer orders.

Although he has no elected experience, Craig could enter the race as the presumed frontrunner among Republicans, including activists who believe COVID regulations were too strict, crime rates are too high and the 2020 election was rigged.

“In the absence of a bigger name, Chief Craig has the potential to take the GOP primary by storm, starting in southeast Michigan where he appears on television regularly,” said John Sellek of Harbor Strategic, who worked for GOP nominee Bill Schuette in 2018.

“Politics in general has gravitated toward candidates with a new, outsider image and the demand that candidates have an extensive governing history has vanished at least for now.”

That means donors “will put the money behind him” to win, said consultant and pollster Steve Mitchell.

“In terms of the recruitment, I would say that they hit a home run,” Mitchell told Bridge Michigan. Craig has a “big name” — at least in metro Detroit — “and he will attract a lot of money. He is a top-tier candidate the Republicans have been looking for.”

Craig announced his retirement Monday, ending a nearly 44-year career in law enforcement that began in Detroit and included nearly three decades in Los Angeles. At a farewell press conference, he declined to discuss his political plans but told reporters he is “evaluating his options” and will make an announcement after his tenure ends June 1.

Mitchell, who was previously hired by Mayor Mike Duggan to poll Detroiters, said his surveys show Craig is “the most popular figure in Detroit.”

Even so, he’s far from universally beloved in Detroit, where Craig has faced scrutiny for his handling of the city’s Black Lives Matter protests, including allegations officers used excessive force against protesters and legal observers during demonstrations and once drove a department vehicle through a crowd of protesters.

Craig has also faced criticism for the department’s use of facial recognition, camera surveillance and audio surveillance technology, and the slow pace of reducing crime.

The city was No. 1 among big cities for its violent crime rate in Craig’s first full year, 2014, and was No. 1 again in 2019, the last year of available records, according to FBI statistics.

He’s a vocal critic of the movement to defund the police and supporter of the Second Amendment, once suggesting more Detroiters arm themselves and appearing on the cover of the National Rifle Association's magazine.

Nakia Wallace, a co-founder of the group Detroit Will Breathe, has demanded Craig resign. She said the chief, who is Black, “has no place” leading police in a majority Black city because of his officers’ use of force.

That won’t hurt him among Republicans, predicted Mitchell, who said “the ‘defund the police’ movement at the end of the day really benefited Republicans.”

Even the biggest boosters, though, acknowledge Craig would have little chance of making a big dent in Detroit, where Democrat Joe Biden won 94 percent of the vote last year.

Mitchell said Craig would do well to get 10 percent of the city’s vote.

Instead, Craig would seek to become the nominee of a party that largely believes widespread voter fraud (including in Detroit) cost President Donald Trump re-election and COVID-19 rules infringed on personal liberty.

Craig wouldn’t answer Monday when asked if there was widespread fraud in Detroit, telling  reporters he did not want to discuss “politics” until later.

Likewise, Craig’s police force was hit hard by the COVID-19 virus — with more than 170 infected, including the chief — and was among the most aggressive in issuing tickets to enforce Whitmer’s COVID-19 orders.

While some sheriffs defied last year’s stay-at-home orders, Craig’s officers issued hundreds of tickets to those gathering outside.

“I’ve known (Craig) was a conservative, but in the city of Detroit as a police chief, you don’t go around advertising that,” said Wayne Bradley, a local GOP activist and former director of African American Engagement for the Michigan Republican Party.

“He was very frustrated with (U.S. Rep.) Rashida Tlaib over the last two cycles, and me being the guy that I am, I was trying to recruit him to run against her,” Bradley told Bridge Michigan.

“But he had bigger ideas, clearly.”

Duggan, the Democratic mayor, made clear on Monday that he believes Whitmer has been a good governor for Detroit and he’ll support her re-election regardless of Craig’s plans.

“One of the most fascinating opportunities that Craig has is his ability to work across party lines, being a Republican in the city of Detroit,” added Jenell Leonard, a GOP consultant who heads up the Marketing Resource Group in Lansing.

“That has not been a strength of Gov. Whitmer, and I think that could be a stark contrast between the two.”

Inroads as a Black Republican

Craig’s connections as an establishment recruit would allow him to build a large campaign that other candidates vying for the Republican nomination may not be able to match, Mitchell said.

And that could be especially important if Craig advanced to take on Whitmer, who entered the year with a $3.5 million campaign war chest that has surely grown over the past four months.

“There are a lot of independent committees that really like to support African-American Republican candidates” because funders want to “broaden the tent,” Mitchell said, noting large contributions from outside groups to candidates like U.S. Senator Tim Scott of South Carolina and former Senate hopeful John James of Michigan.

The Michigan GOP will remain neutral in the gubernatorial primary, but Weiser and co-chair Meshawn Maddock are enthused about the prospect of a Black Republican challenging Whitmer in the general election.

"There are few things more destructive to the Democrats' false narratives about race, crime and class warfare than conservative leaders who are minorities,” Maddock said Friday.

The Michigan GOP last nominated a Black candidate for governor in 1986 when former Wayne County sheriff and executive Bill Lucas left the Democratic Party and won the Republican primary.

Lucas “got just totally embarrassed” by Blanchard in the general election, said Morrow, the Detroit consultant.

But Craig is a stronger candidate who has not been openly partisan in the past, Mitchell said. Lucas lost badly because “Republicans didn’t trust him and neither did Democrats.”

Midterm elections historically favor the party out of power at the national level.

With Trump no longer in office, Whitmer will have to “own” her response to COVID-19 “now that she doesn't have anyone to point fingers at in the White House,” said Leonard, the GOP consultant.

Oakland County GOP Chair Rocky Raczkowski said Craig is a “strong leader” who could win back educated suburban voters who have left the Republican Party because of Trump.

“He walks the walk and talks the talk, and with his intellect and his level of compassion, is exactly what the Republican Party needs,” Raczkowski said.

What’s next for abandoned schools in Detroit? Neighbors say almost anything is better than vacancy. 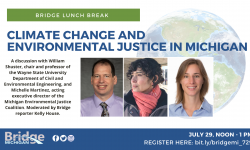