DETROIT — Dr. Cheryl Gibson’s reasons for volunteering for the Proposal 3 abortion rights campaign are deeply personal: As a high-schooler, when the procedure was illegal, she remembers her gynecologist father rushing from home to tend to women bleeding from attempts to end their pregnancies with coat hangers.

Now 67, the retired OB-GYN is among the 4,400 volunteers of the effort to persuade voters to adopt the Nov. 8 ballot measure to keep abortion legal in Michigan.

Gibson and others have placed more than 575,000 phone calls to voters, putting them on the front lines of the most expensive campaign in Michigan this year. Rivaling campaigns have raised at least $57 million, more than the races for governor, secretary of state and attorney general combined.

A big part of her job, Gibson acknowledges, is combatting what she says is misinformation.

“People are listening to (the opponents’ claims),” said Gibson.

“We have to combat the negative information wherever it appears.”

Opponents and supporters of Proposal 3 agree it would establish a constitutional right to reproductive care, such as abortion, contraception and postpartum care, and invalidate a now-blocked 1931 state law punishing abortion providers with up to four years in prison or $5,000 fines.

Beyond that, though, there is little agreement. Foes of the measure have spent at least $16 million in television ads blasting the measure as “confusing and extreme.”

Some polling and political analysts suggest the race may be closer than it could be, given that public opinion surveys suggest more than 60 percent of Americans believe abortion should be legal.

The ‘no’ campaign “has done a good job of muddying the waters to make people think that this proposal is about something other than preserving abortion rights," said Adrian Hemond, a Democratic consultant.

“The ‘yes’ campaign didn't appear to be prepared to push back on that, and the line of attack was pretty obvious from the get go.” 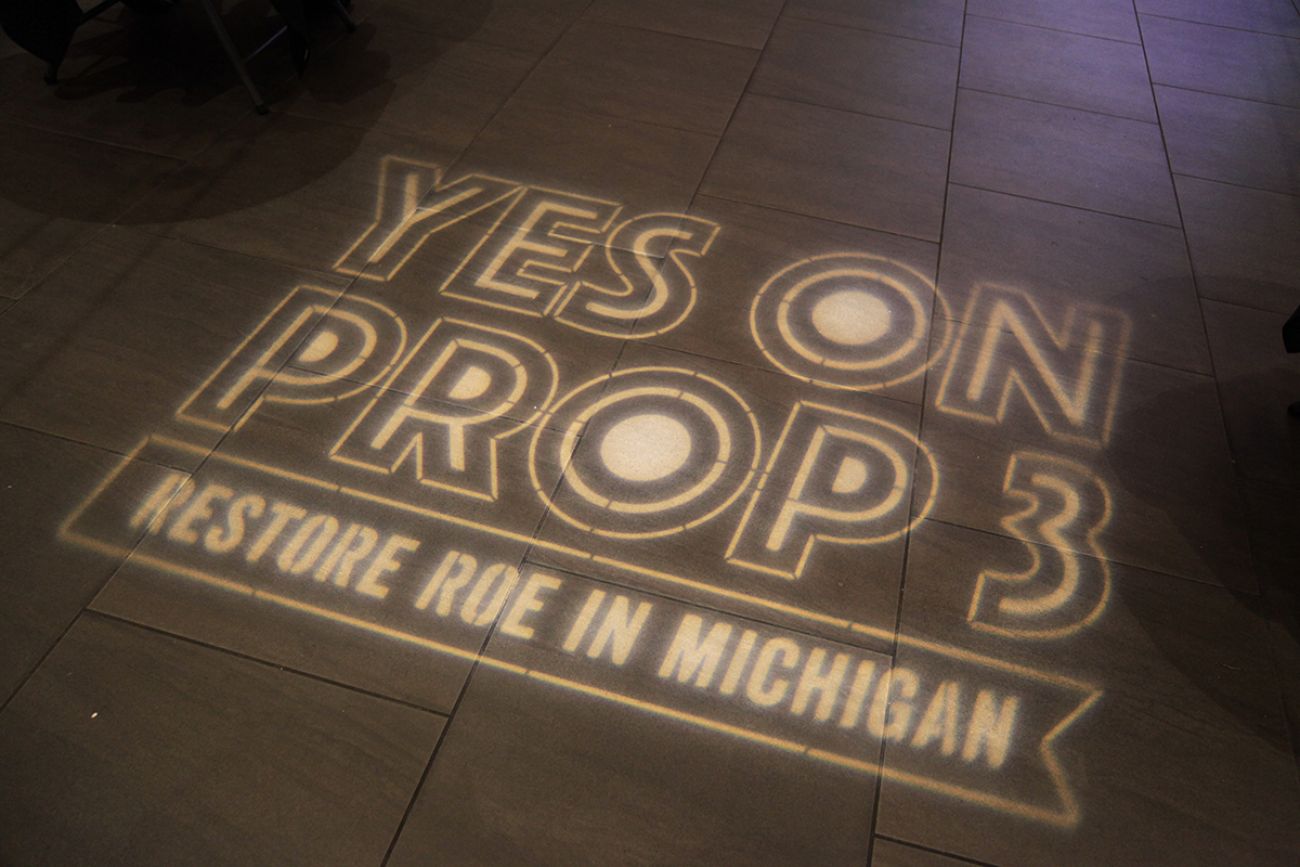 A projector casts “Yes on Proposal 3” down on the floor of the Garden Theater at an Oct. 25 event to support Proposal 3 in Detroit. (Bridge photo by Yue Stella Yu)

Largely funded by Catholic groups and other religious organizations, the anti-Proposal 3 group, Citizens to Support Women and Children, claims the ballot measure would eliminate up to 41 abortion regulations, including parental consent and public health standards for abortion clinics.

Critics claim the law would allow children to receive gender reassignment surgery without parental consent and any health care provider to provide an abortion. Legal experts have told Bridge that is unlikely, but courts may have to decide issues such as parental consent.

Darci McConnell, spokesperson for Proposal 3, accused the abortion foes of peddling “lies.” She said the campaign is “robust,” with volunteers knocking on more than 182,000 doors statewide as of Monday, hosting 100-plus community events and mailing 1 million flyers. 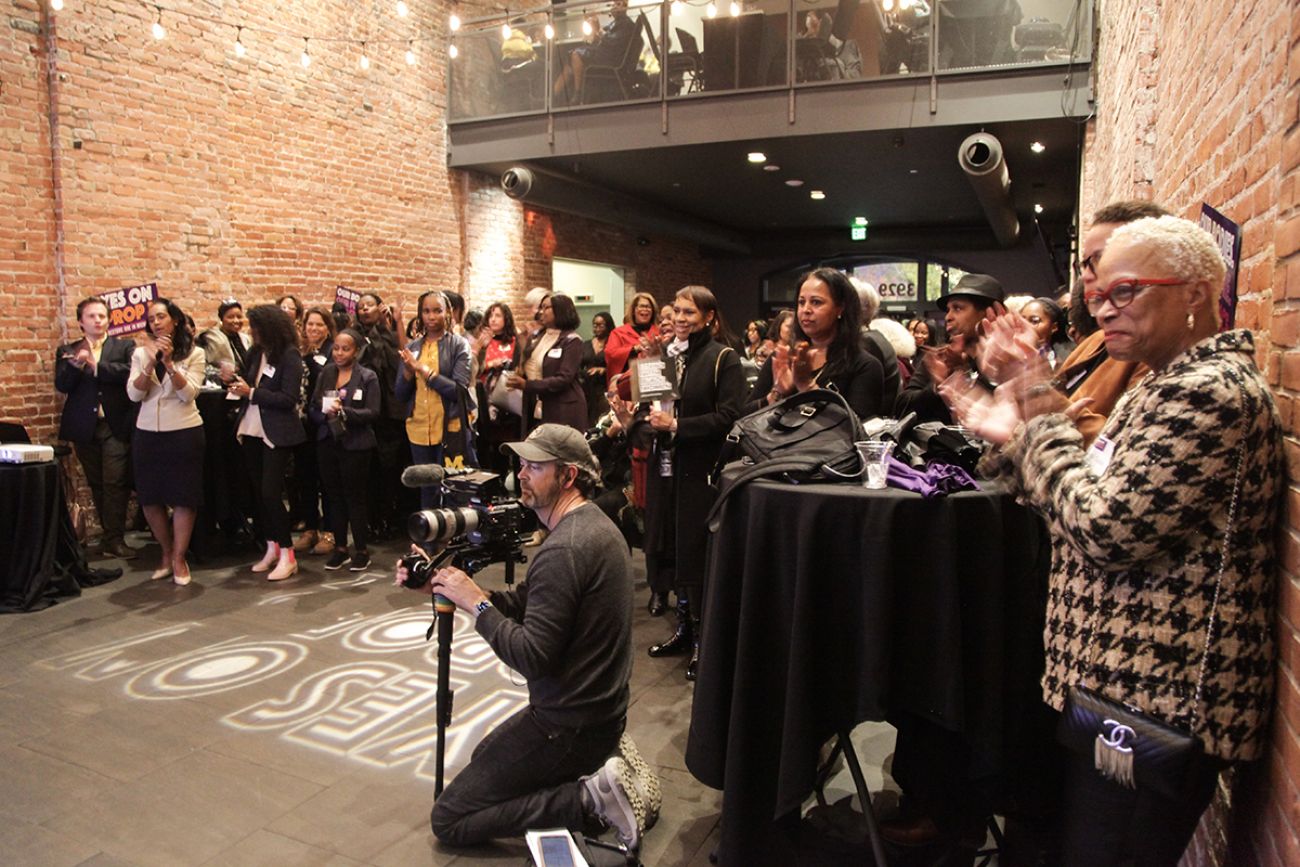 More than 100 attendees, mostly Black women, attended the Reproductive Freedom for All event on Oct. 25 at the Garden Theater in Detroit. (Bridge photo by Yue Stella Yu)

Campaign finance records show Reproductive Freedom for All, the campaign sponsoring the proposal, has spent at least $22.5 million on ad production and placement.

“We’ve had a plan from Day One,” Vanessa Hamilton, press secretary for the coalition, told Bridge. “We don’t let the opposition dictate how we run our campaign.”

The campaign saw a spike in volunteers and fundraising after the U.S. Supreme Court overturned Roe in June, turning in 753,000 signatures in July, the most signatures submitted in state history.

A poll released this week from Glengariff Group, Inc. indicated 55 percent of voters supported Proposal 3, while a late October poll from conservative pollster Steve Mitchell had support at 50 percent.

Support for the other two constitutional amendments on the ballot is over 60 percent, according to the Glengariff poll.

“We are in the last days of this. They need to do it 10 times more,” said Democratic political consultant Al Williams in Detroit, president of the African American Leadership Institute.

He noted that, for the past three weekends, hundreds of anti-abortion protestors have lined the streets in Downriver communities including Southgate, Woodhaven and Taylor.

“I haven’t seen the opposite whatsoever,” Williams said. “(Proposal 3 supporters) may be making phone calls, but I don’t see them in the streets.”

Wayne County Prosecutor Kym Worthy said supporters have to work harder than opponents of the measure, whom she contended “have no problem telling baldfaced lies.”

She was one of three Democratic prosecutors featured in a TV ad in late October claiming that parental consent laws would remain under Proposal 3.

Worthy told Bridge the proposal language doesn’t make any mention whatsoever of parental consent. She said that, for most voters, the issue is as simple as retaining reproductive rights, rather than the claims of opponents.

“There will be people who believe them,” Worthy said. “But I think the majority of people … believe that women should have the right over their own bodies regardless of their affiliation.”

In addition to TV ads, the abortion rights campaign has held events with doctors traveling around the state to discuss the proposal. More than 1,500 health care professionals signed an open letter in support of the proposal, according to the campaign website.

California and Vermont also have amendments on the ballot in November to establish state constitutional rights to abortion. Michigan’s ballot summary is twice as long as either and goes beyond mentioning reproductive freedom or autonomy, spelling out that it includes the right to “prenatal care, childbirth, postpartum care, contraception, sterilization, abortion, miscarriage management, and infertility.”

Critics, including attorney John Bursch, note Proposal 3 guarantees reproductive rights for every “individual” in Michigan without making age distinctions, claiming it would allow children to access abortion and gender-affirming care without their parents’ knowledge.

“I don’t spend a lot of time thinking about what our opponents are saying, because it’s not actually resonating with voters in a real way,” Rowe told Bridge.

“We have the proposal language, and we tell the truth, and people see through lies.”

But anti-abortion ads are getting to voters, Gibson said.

When she called to reach voters, Gibson said she sometimes had to dispel opponents’ claims of voters questioning the proposal’s effect on parental consent requirements.

Countering misinformation is easier said than done because addressing it head-on amplifies lies, contended Julie Campbell-Bode, cofounder of Distill Social and chairperson for the Birmingham-based Fems for Democracy.

“This is where they're stuck,” she said. “If you correct it, you're amplifying their message. If you try to counter their message, you’re repeating it.”

Her organization supports Proposal 3 and has turned to social media, including TikTok, to reach younger voters.

Earlier this week, her group held screenings of the film “Dear Jane” in Detroit, Ann Arbor and Ferndale. More than 1,000 people attended, drawn by social media invitations, she said. Guests were given business cards with a QR code that sent them to voter registration information and a voters’ guide.

And they left with this direction, Campbell Bode said: “Look, your first job is that you know you have to vote. Secondly, go tell your friends about this, too.”

Gibson said the abortion rights campaign must keep up the momentum.

“Getting the effective ads out now is very important as well as making sure that people vote,” she said. “You can pour all the money you want into the television ads. If they do not translate into the person going out and casting their vote and voting yes, then we are in trouble.”