The former president said Friday he is giving Norton Shores Republican Tudor Dixon "a good, hard look" and noted that he previously gave her a shoutout when he visited Michigan in April for a Macomb County rally.

"All of her supporters are working hard for Endorsement/Victory," Trump wrote on Truth Social, the social media company he founded after being banned from Twitter. "Stay tuned!"

Dixon, 45, is a former steel industry executive. She most recently worked in conservative media, where she hosted a daily news show on the Real America's Voice streaming network.

Dixon has praised Trump and echoed his false claims the 2020 election was rigged against him, but rivals have attacked her as an "establishment" candidate because she is endorsed by former U.S. Education Secretary Betsy DeVos, who criticized Trump and resigned from his administration after Jan. 6, 2021, riots at the U.S. Capitol.

Rinke, who has put $10 million of his own money into the race, has aired television ads bashing Dixon as the choice of "RINOs," and another comparing himself to Trump as an outsider businessman unafraid to fight Democrats.

Soldano had courted a Trump endorsement through surrogates but last week publicly pleaded with the former president to "stay out" of the primary election, warning the ""the grassroots will be extremely, extremely unhappy" if he endorses "the establishment-backed" candidate.

A group of nine-Trump endorsed legislative and congressional candidates on Thursday sent the former president a letter asking him not to work with Besty DeVos because she is backing other GOP candidates in their races.

"There is a war going on for the soul of the GOP in Michigan, with Trump-endorsed candidates on one side and the establishment DeVos side on the other," they wrote in the letter, posted online by state Senate candidate Mike Detmer of Howell.

Michigan GOP Co-Chair Meshawn, a Trump loyalist, has also argued DeVos is working against the former president in Michigan.

DeVos responded with her own letter to Trump, according to  Lansing-based MIRS subscription news. She called claims of working against Trump “fake news” people are spreading for “personal gain."

In the letter, DeVos noted that her family is also supporting some candidates Trump endorsed, including congressional incumbents McClain and John Moolenaar. She urged Trump to join her in supporting Dixon "to make sure" Republicans can defeat Democratic Gov. Gretchen Whitmer this fall.

Dixon has made education a key plank of her campaign, vowing to stop liberal “indoctrination” in public schools and implement a Devos-backed scholarship program that would help students pay for private schools.

Betsy DeVos resigned from the Trump administration after Jan. 6 riots, calling Trump’s “rhetoric” a contributing factor in the violent protests. Devos has said she and other cabinet members had discussed invoking the 25th Amendment to remove Trump from office.

The family knows “that Betsy DeVos and I differ on that,” Dixon told Bridge Michigan last month, standing by Trump despite the DeVos endorsement.

In tweets following the 2020 contest, Dixon claimed the election was stolen and accused Democrats of "obvious" and "sloppy" voter fraud.

In a May gubernatorial debate, Dixon said she believes Trump won Michigan in 2020 despite his 154,188-vote loss to Democratic President Biden, contradicting findings from former U.S. Attorney General William Barr and the state Senate Oversight Committee, both of whom investigated claims but found no evidence of widespread fraud.

Trump praised Dixon in February, calling her a “very special” candidate when her campaign paid $7,342 to host a fundraiser at his Mar-A-Lago resort in Florida. And when he rallied with supporters in Macomb County in April, Trump called Dixon “fantastic” and “brilliant.” 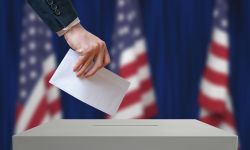