Throughout this crucial election year, Bridge and the nonprofit Center for Michigan are providing fact-based, data-driven information to voters about elections for Governor, Attorney General, Secretary of State and state legislative offices. This includes ballot initiatives. Today’s reports, on voting access, are the last of three this week.

Proposal 3 — the initiative to solidify a variety of voting rights reforms in the state constitution — is organized by the group Promote the Vote, which bills itself as a coalition of groups including the Michigan NAACP, the League of Women Voters, the American Civil Liberties Union and more. As of July 20 (the last campaign finance reporting deadline), the ballot committee has spent $2.5 million on petition signature gathering, consulting and marketing.

The only organized opposition to Prop 3 is from a group called Protect My Vote, which was created Aug. 23 and lists Mary Doster as treasurer. She is married to Okemos election law attorney Eric Doster and also serves as campaign treasurer for Republican-nominated Supreme Court justices. The group hasn’t yet had to report its campaign finances, so it is unclear how much money it has received or spent. Mary Doster could not be reached for comment Wednesday.

Bankrolled by the ACLU

The vast majority of funding for Promote the Vote comes from the American Civil Liberties Union, a national non-profit group that works to protect constitutional rights through litigation, lobbying and other types of political organizing. It most often comes under fire from conservative organizations, but has also drawn ire from the left for working to protect the free speech rights of neo-Nazis and other hate groups, among other things. The national ACLU group based in New York has given $2.29 million to Promote the Vote as of the July filing deadline.

The ACLU’s Michigan branch is Prop 3’s second-biggest funder. It is currently involved with nearly 80 lawsuits spanning issues such as environmental justice and LGBT rights. Earlier this year, it sued for the proposal to make the ballot but was later approved for the ballot by the Board of State Canvassers. It has contributed more than $265,000 to Promote the Vote.

Together, donations from the national and Michigan-based ACLUs account for 86 percent Promote the Vote’s funding through July. 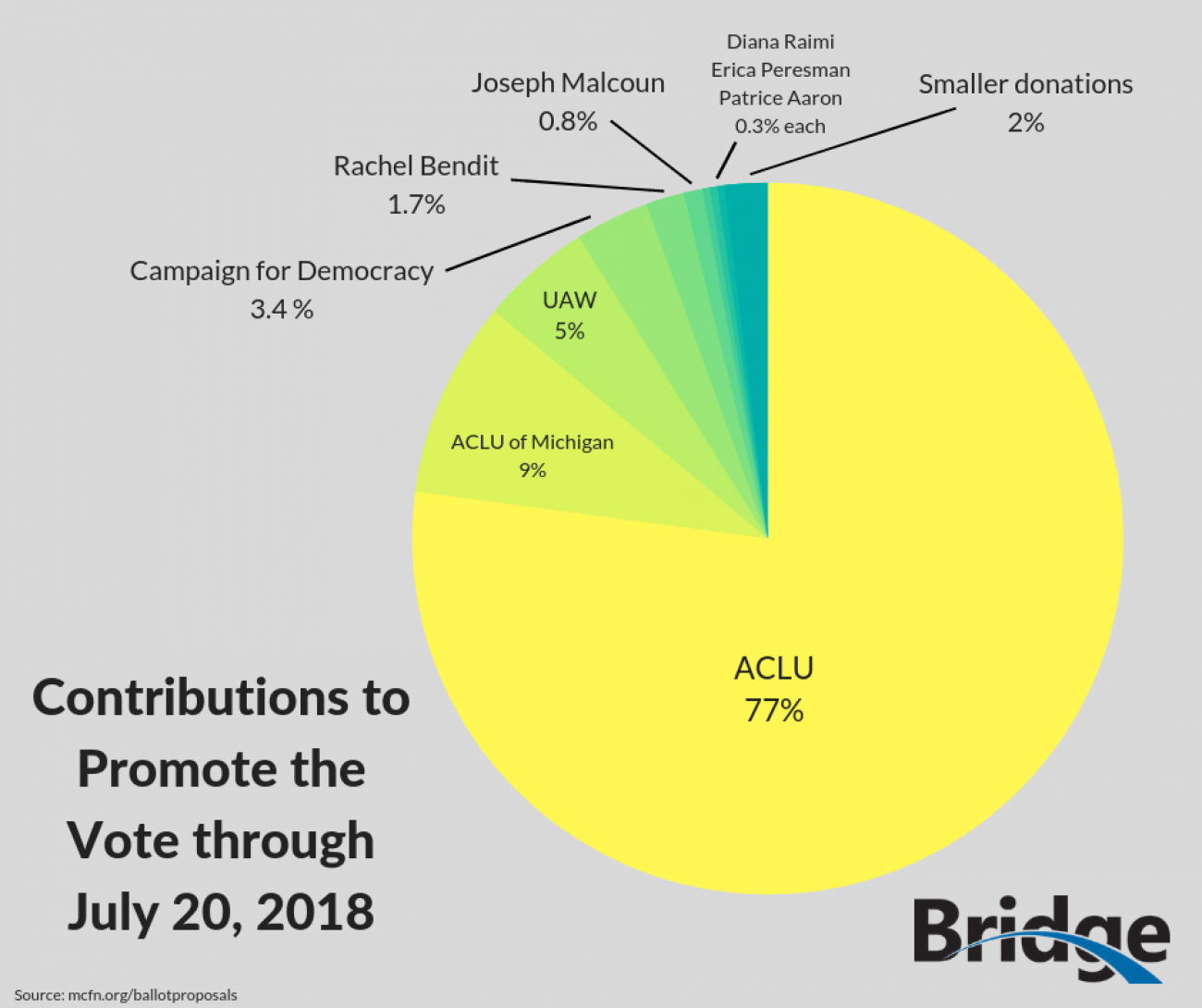 The United Auto Workers is Prop 3’s third-largest funder, giving $150,000 as of the latest campaign finance filing deadline. The UAW is a longtime power broker in Michigan politics that has worked hand-in-glove with the Michigan Democratic Party for decades.

The California-based Campaign for Democracy gave $100,000. The group has no website, but in a business filing with the State of California said it is intended to “advance pro-voter democracy reforms that allow all voters to have an equal voice in their democracy.”

The remaining funds — around two percent of Promote the Vote’s total funding — came from donors who gave lesser amounts.

In total, Promote the Vote received around 300 individual contributions at the time of its latest campaign filing. Eighty-five percent of the contributions came from people living in Michigan.