LANSING –  Plans for a new 100-bed psychiatric hospital in rural Tuscola County may help the region’s economy but will do little to address Michigan’s larger mental health “crisis,” according to experts who remain wary of long waiting lists and limited care options.

Budget language signed by the law will shrink the 150-bed facility but maintain current funding levels for 542 full-time employees, which supporters hope will help lure qualified workers to a hospital that has struggled to attract them.

The Whitmer administration in March halted planned construction of a new 200-bed Caro Center, citing concerns over staffing shortages and accessibility for family members of patients in the Thumb facility.

The new plans, while smaller in scope, are still "a great win for mental health and a great win for the community," said Rep. Phil Green, R-Millington, whose district includes the facility.

"It sends a statement that the state is making a commitment to the community, as the community has to the state for the last 105 years," he said of the hospital, which first opened in 1914.

Green and Sen. Kevin Daley, R-Lum, helped negotiate a deal with the Whitmer administration before bipartisan budget talks broke down three weeks ago. Unions representing Caro Center employees continued pushing to save the facility, and plans to rebuild the center survived the governor’s line-item vetoes.

While state officials had privately discussed closing the facility, Department of Health and Human Services Director Robert Gordon in July recommended shrinking the Caro Center to 84 beds, either through renovation or a rebuild.

The budget agreement calls for the state to use existing funds –  former Gov. Rick Snyder originally allocated $115 million for the larger rebuild in 2017 –  to complete the smaller project and save a major employer in Caro, population 4,229.

Despite local celebration, mental health experts describe the budget deal as a political decision that does not do enough to address major problems with the state’s care network.

“Caro is just one symptom of a huge problem," said Mark Reinstein, president and CEO of the Mental Health Association in Michigan.

“Even with a new Caro at 100 beds — or if you go back to the Snyder administration with 200 beds – we don’t have anywhere near enough state-operated psychiatric hospital beds in Michigan."

The numbers appear to bear out those concerns. As of May, 202 residents were on a waitlist for a bed inside one of Michigan's adult sychiatric hospitals, according to a recent analysis prepared for the state.

Of those, 24 lived in the Caro Center region, compared to 46 in Metro Detroit and 14 in the Upper Peninsula.

Is it the best option?

Rebuilding the Caro psychiatric hospital was one of four options analyzed this year by Myers and Stauffer, a national health care and social services firm the state hired to assess options after Whitmer halted the earlier expansion plans.

Keeping the hospital in Caro “would support patients’ continuity with caregiver relationships” and make some sense geographically, the firm found. Tuscola County also offered to upgrade and operate a community water source for a new facility,  an obstacle the Whitmer administration raised in pausing the project.

But the existing Caro Center has struggled to recruit staff and has significantly higher percentages of vacancies than the state's other adult psychiatric hospitals in Kalamazoo and in Metro Detroit, according to the assessment.

Of the three, Caro is the farthest from colleges and other post-secondary institutions that would be fertile ground to find young talent or partner on training programs.

As of April 30, the Caro Center had 370 employees and 69 vacancies, including open positions for two registered nurse managers, seven psychiatrists and 16 psychologists. State officials said a psychiatry director position had been “vacant for years.” As a result, the facility was not accepting patients for all of its 150 beds.

Snyder’s State Budget Office sounded staffing alarms late last year, warning that some residents had gone months without seeing a psychiatrist while other workers were forced to work “an unsustainable amount of overtime.”

The nearest bus stop to the Caro Center is 25 miles away, according to the Myers and Stauffer assessment, posing a challenge for some relatives who want to visit patients.

Despite earlier concerns, the state health department is now backing the 100-bed rebuild and is "glad to see funding for a right-sized hospital in Caro," said spokesman Bob Wheaton.

The state budget also includes $5 million in funding to provide “community-based services” to individuals with “acute psychiatric conditions,” which the administration is touting as a critical component of the deal that will help expand care despite the Caro downsizing.

“Those funds will help avert the need for hospital placements in the first instance,” Wheaton said.

With an expected Medicaid match, the health department estimates the $5 million in funding could help more than 100 people a year access intensive therapy and other supports in housing operated by a community-based or nonprofit organization rather than the state.

The aim is to serve people “closer to home and at a lower cost than state hospitalization,” according to Michigan Department of Health and Human Services spokeswoman Lynn Sutfin.

As part of his plan to shrink Caro, Gordon had also recommended the state renovate and re-open closed wings to increase patient capacity in the Kalamazoo and Metro Detroit psychiatric hospitals. He proposed adding 61 beds at the facilities, which are closer to major population centers.

Those renovations would likely cost less than $20 million, according to the administration. But the Legislature did not provide that funding, "and that continues to be a concern," Wheaton said.

The state’s three adult psychiatric hospitals now have a combined 480 beds to serve Michigan patients, including 150 each at Caro and Kalamazoo and 180 at the Walter P. Reuther Hospital in Westland.

Caro will lose 50 beds under the new rebuild plan. Under a best-case scenario, the budget funding for community-based services will help the state make up that gap and care for an additional 50 patients per year.

Reinstein of the Mental Health Association welcomed the $5 million in community funding but said he is skeptical the state can build effective service packages for individuals who would otherwise require hospitalization.

One prominent hospitalization alternative the state will encourage, a specialized and personalized approach known as Assertive Community Treatment, “has not proven to be perfect or workable in all cases,” he said.

“Everything we can get helps, but what they have on the table doesn't come close to solving the crisis,” Reinstein concluded.  “We have very, very few intermediate and longer-term care hospital beds available in Michigan for people who at times in their lives need them."

Kevin Fischer, state executive director for the National Alliance on Mental Illness, agreed the Caro Center downsizing plan is concerning because “there's such a shortage of psychiatric bends here in Michigan.”

He also questioned the plan to keep the facility in Caro, noting its huge service area extends as far as the Upper Peninsula. He suggested the need for a secondary hospital in northern Michigan.

“If they're going to build a new facility, and it's only going to be one facility with 100 beds, I don't think it should be in Caro because it doesn't meet the needs of the people,” Fischer said.

“I know there's a lot of conversation about the economic impact the loss of the hospital would be to that community. That's frankly not my concern. My concern is making sure we can service people ... as effectively and efficiently as possible.”

Caro officials say the psychiatric hospital is part of the fiber of the community, which has a proud tradition of providing a service that residents in other parts of the state may not want in their own backyards.

“The community has been bounced around so many times on this,” said Daley, the senator who helped prod negotiations in the Senate. “It's just a real important thing for that community and how it affects the employees and everything up the ladder.”

The psychiatric hospital is the second-largest employer in Tuscola County and has a $54 million annual impact on the regional economy, according to one analysis often cited by local supporters.

If the facility closed, which appeared to be a real possibility earlier this year, the county's unemployment rate could have soared to 14.7 percent, the  county board of commissioners found in a July report. The county’s unemployment rate was 4.9 percent in August.

“Granted it’s not the 200-bed facility as promised, but we are thankful that 100 beds will at least be here and we will have at least the same number of employees that are currently employed at the Caro center,” said Caro City Manager Michael Silverman.

Fears of a potential closure produced a huge outpouring in Caro, where hospital workers launched a grassroots campaign to plaster the city with lawn signs, billboards and T-shirts urging Whitmer to “keep the promise” and rebuild the facility.

Union groups and GOP lawmakers rallied around the movement and brought local demands to Lansing. Silverman said he's never seen anything like it.

“Really, the dedication that our citizens had in keeping the Caro Center here was the very rare instance in which you see everyone fighting to keep an important part of the community here.” 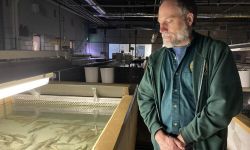 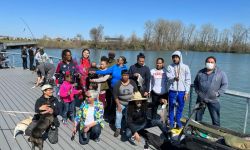