TEMPERANCE—Angie Bushroe realizes there are life-and-death considerations on whether to get a COVID vaccine.

But this time of year, there are additional reasons for the 17-year-old high school senior: Prom, graduation, college visits.

“People talk about it,” she said of the conversation at Bedford High School in Michigan’s southeast corner. “We’ve been hearing about it. They’re seeing their parents get vaccinated, and teachers talk about it.”

“I don’t know. We’re teenagers. It didn’t feel real to us for a long time,” she said. “Now they see it as they’re way back to a normal life. They’re thinking about it, even because of prom.”

Vaccination clinics are popping up in high schools across Michigan, as health officials scramble to immunize Bushroe and other 16 to 18-year-olds from COVID-19 before the school year ends.

The effort is key to tamping down spread of the coronavirus in Michigan, which currently has the highest infection and hospitalization rates in the nation, and to meeting the vaccination goals Gov. Gretchen Whitmer has linked to further loosening pandemic restrictions across the state.

When it comes to young people, though, it’s a slow go.

There were more than 100 students among the 1,350 or so people who came to a vaccination clinic at Bedford High School in March — a “good showing” but only a fraction of the 1,000 or so attending Bedford Public Schools that would have been eligible, said Carl Shultz, superintendent.

Even Bushroe, who was willing to get a vaccine as she and her student council classmates recently planned a pared-down prom, was busy refereeing a soccer game that day and didn’t make it to the clinic. She plans to get the vaccine elsewhere instead.’ 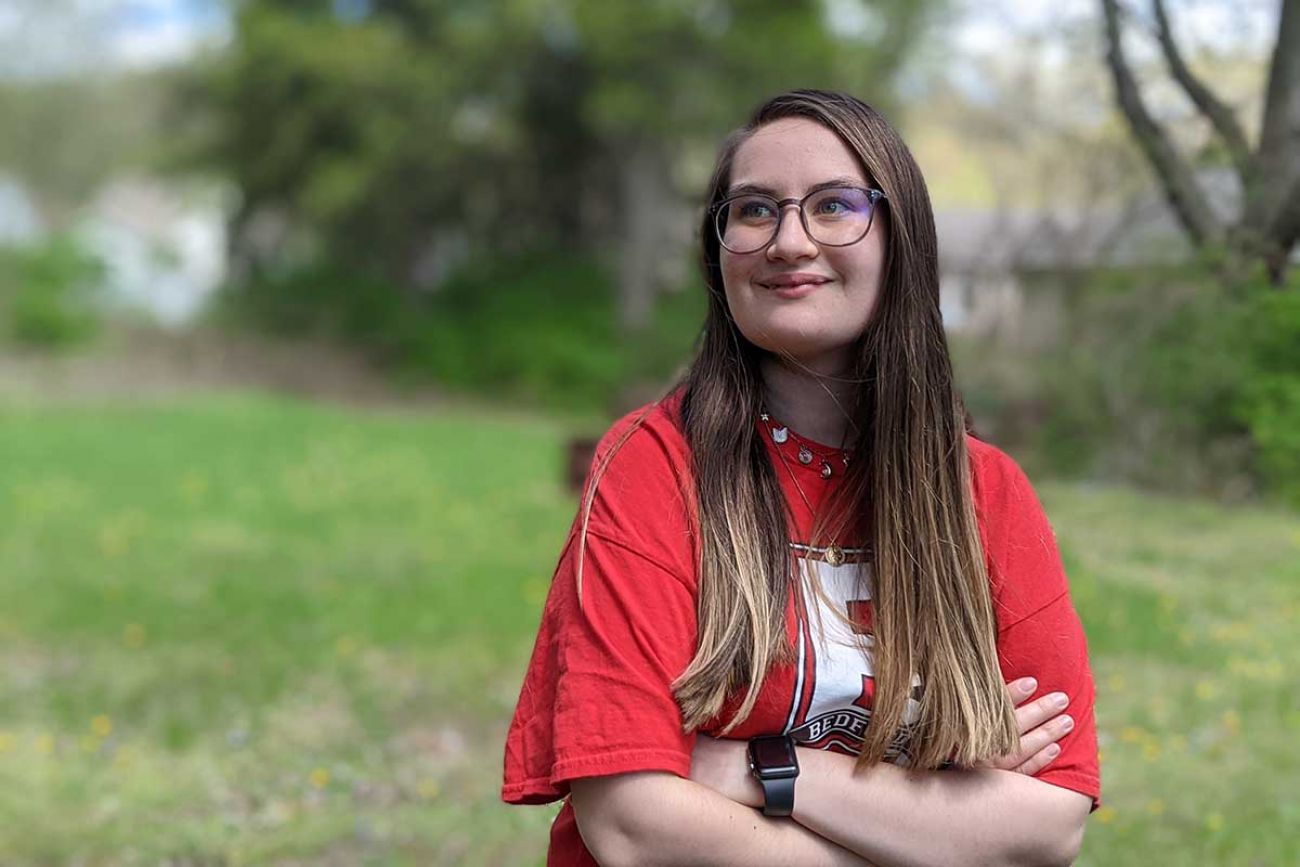 Vaccines are a way back to normal end-of-school events, like prom and graduation parties, said Angie Bushroe, 17. (Bridge photo by Robin Erb)

When it comes to the state’s youngest and soon-to-be adults, there's plenty of work ahead in helping to get the state to herd immunity.

As of Friday, half of Michigan residents 16 and older had at least one dose of COVID-19 vaccine, but that number fell to 29.7 percent for residents in their  20s, and is even lower for teens aged 16 to 19, at 25.9 percent. Fewer than 1-in-10 teens have been fully vaccinated.

“It's not as though a lot of students are against it, it's that there's no rush,” said  Colton Brewer, 20, a Central Michigan University sophomore from Almont.

He’s scheduled for his second dose of Moderna on Friday. He said some of his friends had been vaccinated on campus — but certainly not everyone.

To make it more convenient, the school transformed a math class April 22 into a morning vaccination clinic.

“When I was 17- or 18-years old, I don’t know that vaccinations were on the top of my priority list,” Smith said. “You see yourself as a bit invincible at that time.”

But perhaps not invincible to quarantine.

Many health departments have begun to remind students that vaccines mean they can remain on the athletic field — even if they’re exposed to an infected person. Fully vaccinated means no automatic quarantine if the health department calls.

That’s a big deal for students, whether for the love of the game or the need to be with friends.

“We’ve had some kids quarantined eight or nine times over the past year,” said Kerry Ott, spokesperson for the LMAS Health Department, which covers four counties in the eastern Upper Peninsula.

But school leaders must be careful not to pressure students or families into vaccinations, both Shultz in southeast Michigan and Smith in northern Michigan told Bridge Michigan.

“I can make it convenient, but also appreciate the personal decision to vaccinate or not to vaccinate,” said Kingsley’s Smith.

Vaccinations of 16- and 17-year-olds are only being administered to students who have signed permission forms from a parent, or who have a parent with them at the school clinic at the time of the shot, according to Linda Vail, health officer for the Ingham County Health Department.

High school vaccination clinics took on more importance Thursday, when Whitmer linked the easing of COVID restrictions to the percentage of Michigan adults who’ve received at least one dose of a COVID vaccine.

Two weeks after 55 percent of Michiganders 16 and older have received at least their first dose, employees who have been forced to work remotely under state restrictions can return to their offices and work sites. Two weeks after those rates reach 60 percent, the state will relax capacity limits at restaurants, sports stadiums and funeral homes. And two weeks after the 70 percent mark, (when roughly 5.7 million Michiganders 16 and over have had a first dose), the state will lift face mask mandates and other requirements.

“Today, I announced the #MIVaccToNormalChallenge, a pathway to gradually get back to normal as we hit our vaccination targets and push toward our goal of vaccinating 70% of Michiganders ages 16 and older. Please, sign up for your vaccine appointment today. Let’s get it done.” pic.twitter.com/q7e4l2zdNR

“When the vast majority of transmission is in that age group, the data tells you that’s where you need to be vaccinating.”

The state doesn’t keep public school enrollment data by age, but considering the typical age of students in 10th through 12th grade, there are likely between 200,00 and 300,000 Michigan high school students who are at least 16 years old, the current minimum to be eligible for COVID-19 vaccine.

So far, high school vaccinations are being coordinated by individual county health departments, and some are further along in the process than others.

For example, the Ingham health department is going to all 14 school districts in the county in the next two weeks. Between 2,000 and 3,000 students have signed up, Vail said.

Among those schools is Okemos High School, which held a pop-up clinic Thursday night at which 89 people received their first dose of the Pfizer vaccine. The clinic, open to students and community members, received some pushback from the public.

The Oakland County Health Department is in the planning stages of a similar program, according to a health department spokesperson.

That’s good news to Rochester Community Schools District Superintendent Robert Shaner, who said his district and others in Oakland County are eager to get shots in arms. “I know Oakland County has worked hard to get adults vaccines over the past few months, and we’re open and ready to do the same with our teens,” Shaner said.