IONIA COUNTY—For those inclined toward camping, yoga and small donkeys and horses, Rachael Devroy has just the place.

Opened just a couple months ago, it’s already seen guests from as far away as Arizona who shell out $30 a night for their stay.

“It’s been a dream of mine to teach yoga with miniature animals,” Devroy said, as a donkey named Ilsa roamed on the hillside behind her. “It’s gone better than I could have imagined.” 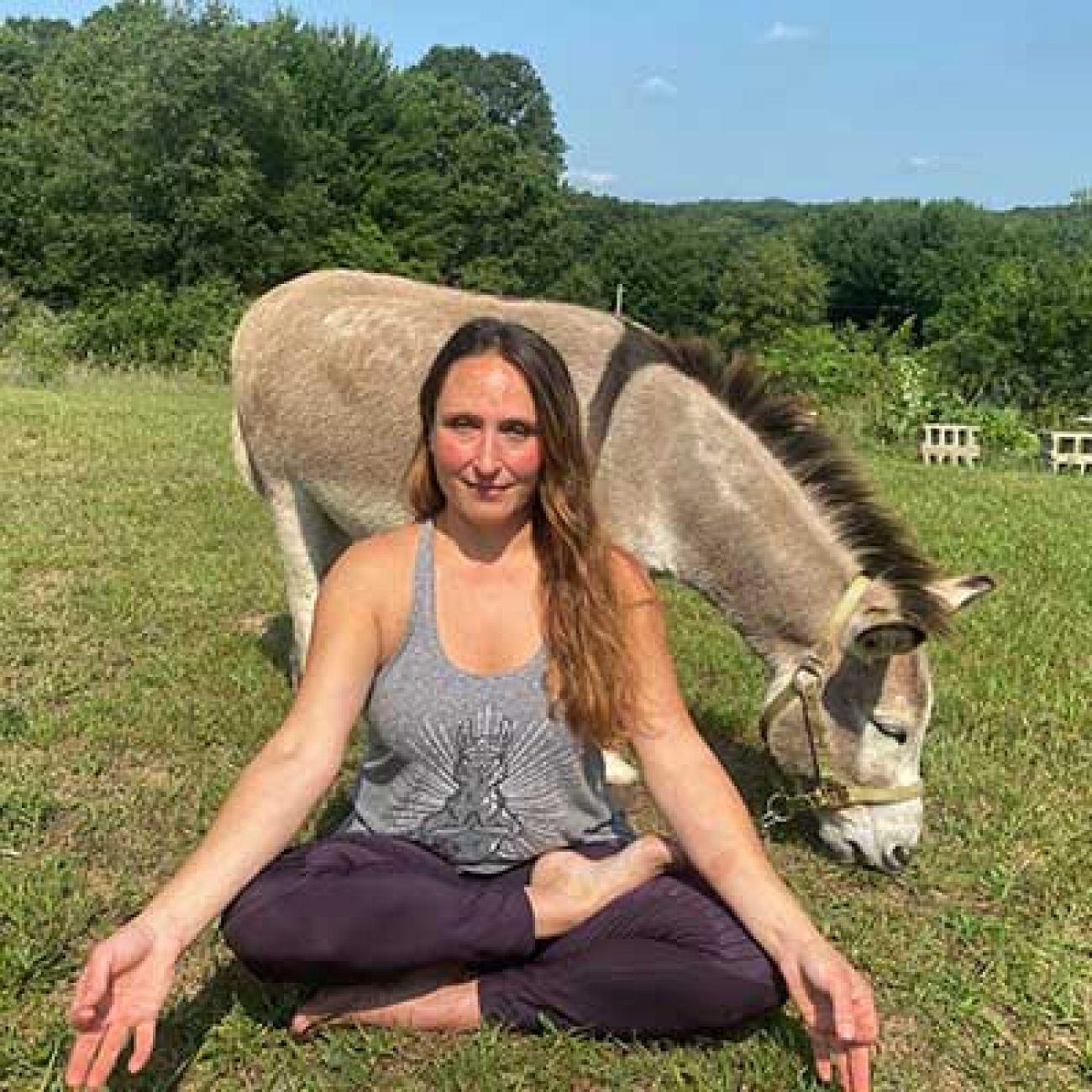 If drum circles are your thing, south of Traverse City is a 97-acre, fourth generation tree farm known as the House of Bear, a rustic site where campers might encounter wildlife.

“It’s been a lot of fun,” said Jason Nied, the genial host who goes by the name Bear.

“We had some people from Chicago last year and their daughters had never run out in the woods. They had their shoes off the whole time they were here. To see people back to nature is really what it’s about.”

The COVID pandemic has sparked an explosion in visitors to outdoor spaces ─ with state and national park campsites booked weeks or months in advance. To meet growing demand, a network of hundreds of Michigan entrepreneurs are crafting their own take on traditional vacation rental sites such as Airbnb.

Booking through a nationwide site called Hipcamp, they offer everything from a solitary teepee by a stream to cabins in the woods to a backyard tree house just off Int.-75 with air conditioning and flat screen TV.

Another site, called Tentrr, is posting “glamping” sites at $100 to $175 a night at a Michigan state park and recreation area, with fancy platform canvas tents already set up. It also offers remote sites on private land for those who bring their own tents.

Ron Olson, chief of parks and recreation for the state Department of Natural Resources, said the state contracted with Tentrr in 2018 to develop sites in unused areas of the state’s camping network of more than 15,000 sites. Olson said Tentrr paid for construction of the tent platforms, the cost of the tents and contributes a share of its fee to the state.

Tentrr currently offers 20 campsites between Sleeper State Park in The Thumb and Highland Recreation Area west of Auburn Hills, that have proven popular with campers who want a little luxury with their outdoors.

“It extends the choices we can offer people,” Olson said.

Brad Garmon, who directs the DNR’s Office of Outdoor Recreation Industry, sees a marketplace responding to what the public says it wants. 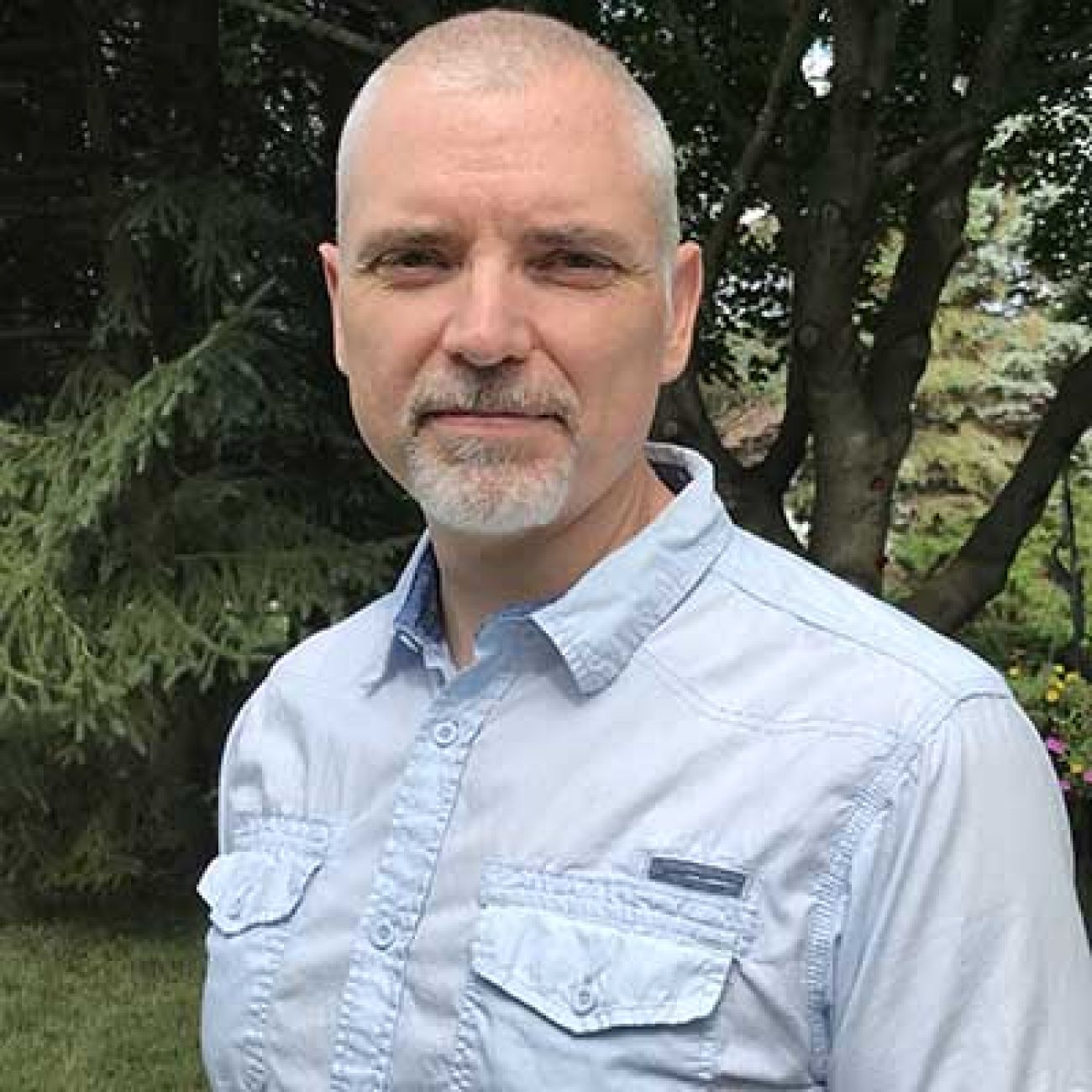 Brad Garmon, the state’s director of outdoor industry, says “the gate is open” to new ideas in camping. (Courtesy photo)

“I think the gate is open,” Garmon told Bridge Michigan, even as the state is setting records for stays at traditional DNR campgrounds and overnight lodges.

Garmon expects some hiccups as these alternative campsites grow, given that sites booked through venues like Hipcamp are largely self-regulated, under broad rules it lays out for joining members.

“It’s like anything new. It does come with some risk, some unpredictability,” he said.

“The beautiful thing about a DNR campsite is you know what you are getting. They are professional. They have done this. They have staff.

“It’s just like everything else, like with Airbnb,” Garmon said. “You go into this with eyes wide open. It’s a wild, wild west.”

State environmental regulations generally require campground operators to file for licensing through the Department of Environment, Great Lakes and Energy, but only if they offer five or more campsites.

EGLE spokesperson Nick Assendelft said the department has no oversight for campgrounds with fewer than five sites, adding: “That’s something that’s going to be done at a local level.”

Assendelft said he was unaware of any complaints lodged against Michigan sites booked through Hipcamp. Inquiries to Hipcamp were not returned.

Overnight charges in Hipcamp sites vary, with many ranging from $30 to $50 a night. Operators pay 10 percent of their camping fees to Hipcamp, launched in California in 2013 by a young U.C.L.A graduate frustrated at her difficulty in booking a New Year’s Eve campsite at Big Sur.

South of Flint not far off I-75, Cheryl Robinson rents out a treehouse her fiance built five years ago to stay in as they renovated a century-old farmhouse. Situated on seven acres about 500 yards from the house, the treehouse boasts air conditioning, ceiling fan, flat-screen TV and Blu-ray player. It rents out for $90 a night.

To add to the ambiance, they added a horseshoe pit and are completing work on a putting green.

“It’s kind of glamping. You feel like you’re Up North, but you’re really not,” Robinson said, adding that it’s been booked about four days a week this summer.

“We got people from Detroit and from five miles away. We’ve had people from Indiana and we just had a couple from Florida. It’s been booming.”

Back at the Miniature Horse & Donkey Oasis, founder Rachael Devroy said profit is only part of the reason for opening the site. Devroy’s principal income comes from her work as a veterinary assistant at a nearby animal clinic.

“It’s a nice side income,” she said. “But it’s not the total driving force of why I do this. I love the experience of meeting new people. A lot of it is the joy I get from that.”

Over the Fourth of July weekend, Owosso resident Kay Conway and four friends pitched their tents at Devroy’s site. Conway said she has had good luck with Airbnb stays, as well as another Michigan Hipcamp site.

“I prefer Hipcamp. It feels more personable,” she said.

When they arrived, Conway recalled, they were greeted by the site of wandering donkeys on the ridge above their campsites.

“That was really cool,” she said.

And while Conway said she’s never really practiced yoga, she and her friends gave it a try one evening just before sunset, led by Devroy ─ who does the sessions for free. “It’s not something I’ve ever done before,” she said. “We all loved it.”

A few miles to the northeast, outside Ionia, Jackie Foster opened a cabin to campers through Hipcamp three years ago. It sits on 10 acres, tucked against the woods and a small stream about a quarter mile from Foster’s home. 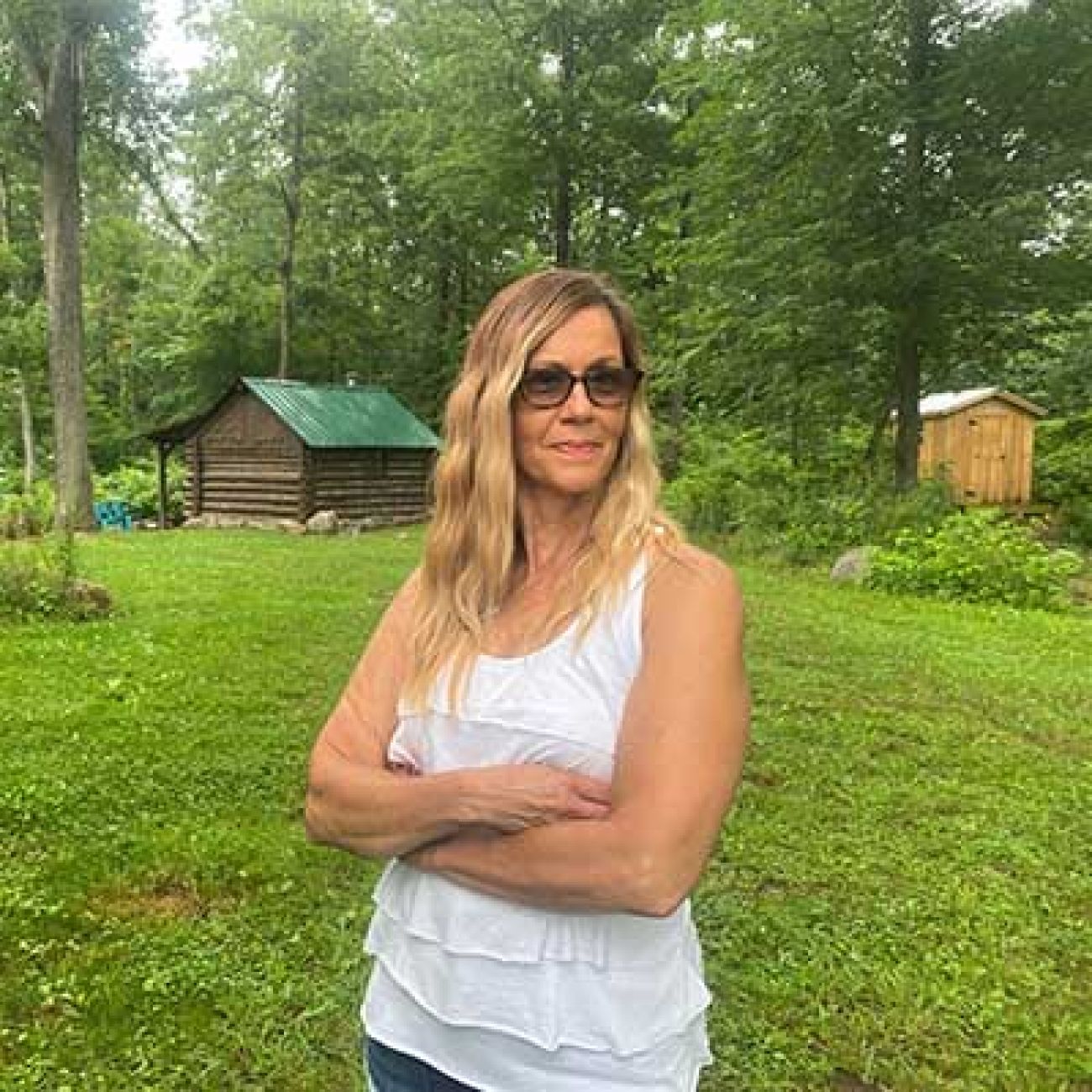 Jackie Foster opened a small cabin on her property to guests three years ago: “To share it with people is my main thing.” (Photo by Ted Roelofs)

Unlike the luxury tree house near Flint, the 10-foot-by-12-foot cabin is all about the basics: No electricity, WiFi or TV. Four chairs, three oil lamps, bunkbed and wood stove.

“In the beginning, this was a way to share it. It wasn’t really getting used,” Foster said , as she gave a recent tour of the site, with a cedar waxwing chattering in a nearby tree.

“There’s a real God feeling back there,” Foster said. “I call it my healing property. To share it with people is my main thing.”

Foster charges $55 a night, and estimates she’s made about $6,000 since she opened the cabin to guests. That supplements her principal income from a job in a local factory.

“I’ve been able to use those funds and put it back into all the maintenance of my property,” she said. 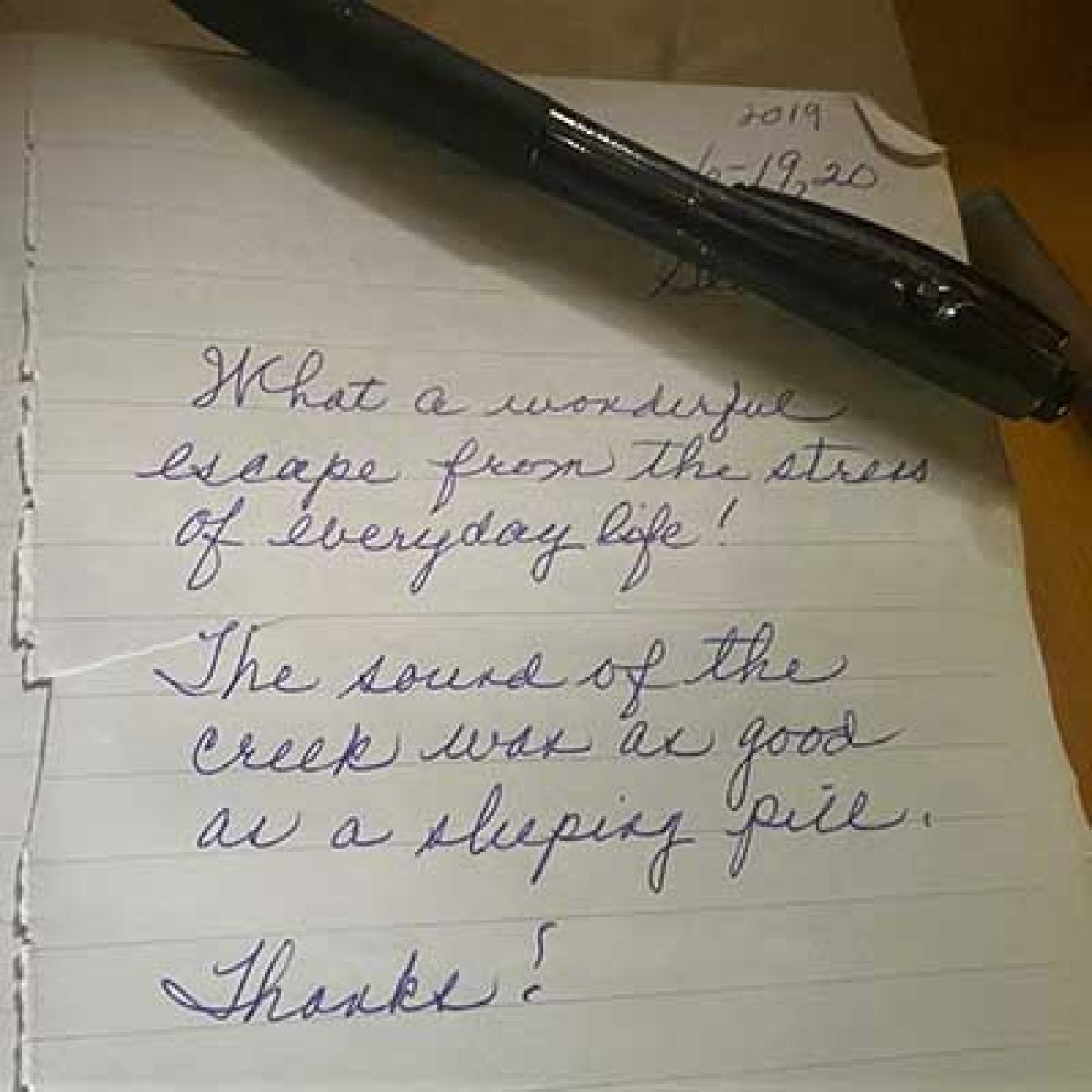 A log book for guests charts memories of their stay in the cabin. (Photo by Ted Roelofs)

A year ago, Ann Arbor resident Allison Lawrence and five twentysomething friends were searching for an isolated campsite where they would feel safe as COVID-19 continued to spread. They chose Foster’s land.

“It was the middle of the pandemic and no one knew what was going on. We didn’t want someplace crowded. We just needed to be away from people and with people we trusted.”

They pitched separate tents outside the small cabin, using it as shelter during occasional storms that rumbled through.

Otherwise, they whiled away the time spread out in hammocks, playing cards and board games and roasting marshmallows for S’Mores.

“We just chatted. A lot of it was just talking,” she said.

As she offered a look inside the cabin, Foster pulled out a log book she keeps for guests who care to share memories of their stay.

A longhand entry from June of 2020 is typical.

“What a wonderful escape from the stress of everyday life!” a visitor wrote. “The sound of the creek was as good as a sleeping pill.”