At flagship institutions like the University of Michigan-Ann Arbor (above) and Michigan State University, the number of incoming freshmen who have made deposits to hold spots in the coming class is higher than the annual target. (Shutterstock)

Michigan colleges aren’t seeing the coronavirus enrollment drops they feared —  at least not yet.

Officials at many universities and colleges in the state had worried that students — particularly incoming freshmen — would take gap years or enroll in online courses at local community colleges rather than move into dorms in the midst of a pandemic.

But preliminary first-year enrollment figures for colleges surveyed by Bridge are steady or higher than target enrollment.

“Our colleges, both public and private, have really worked hard to put together sound plans,” said Colby Cesaro, vice president at Michigan Independent College and Universities, an association of private institutions. “The consistent communication from college presidents… has really helped families feel comfortable that if they are going to meet in-person, they’re not going to do it in an unsafe way.”

Some students change their minds during the summer, choosing to enroll elsewhere or not to go to college at all. But deposits — the first money paid to a college — are an early indication of actual fall enrollment.

At flagship institutions like the University of Michigan-Ann Arbor and Michigan State University, the number of incoming freshmen who have made deposits to hold spots in the coming class is higher than the annual target. Other universities contacted by Bridge have also avoided a large dropoff in fall enrollment.

“I’m not surprised… people are probably a little unsure about traveling… and leaving their state, so big state universities are likely in a good position to attract more students this cycle,” said Brendan Cantwell, associate professor and coordinator of the Higher, Adult and Lifelong Education program at MSU.

For some incoming freshmen, factors like proximity to home and financial aid is playing an even larger role in deciding which college to attend, or to delay it altogether. Even students who initially intended to go to college and deposited their enrollment fee are changing their plans, Inside Higher Ed reported in late April.

At Eastern Michigan University, there are currently 1,284 registrations, compared to 1,402 last year. “We have remaining June registration dates that will significantly help us close the gap,” EMU spokesperson Geoff Larcom said in an email.

Since Oakland University does not use enrollment deposits, it’s difficult to compare its case with other universities. However, the school did see an increase in summer enrollment, which can be promising for the fall semester. “OU was up in enrollment 5.1 percent for the first summer session and up 0.7 percent for the second summer session,” Brian Bierley, Oakland’s Director of Media Relations, said in an email.

Some schools have seen relatively steady enrollment deposits compared to years prior. Kalamazoo College has 409 deposits this year compared to 413 last year.

At the University of Michigan-Ann Arbor, there are currently 7,298 deposits from incoming first-year students, higher than the school’s target of 7,182. Similarly, Michigan State has 9,165 deposits, which is “up from 2019 by a few hundred,” MSU spokesperson Emily Guerrant said in an email.

One reason for the increase at U-M: the school intentionally admitted more first-year students than in previous years, assuming more would change their plans than normal.

Some smaller colleges, however, are still likely to lose enrollment, MSU’s Cantwell said.

“There is a declining number of high school seniors in the state of Michigan over time,” Cantwell said. “That means institutions that rely mostly on in-state students have a smaller number of students to draw from, and places that have been growing over time, like Michigan State… are in better shape to compete for the students who are left in Michigan.”

He describes the gap between growing and smaller institutions in Michigan as “a long-term structural challenge that is accelerated by the pandemic.”

For colleges and universities that have successfully managed to maintain enrollment, the question becomes, now what? Most institutions have vowed to bring students back for face-to-face learning, but still have to figure out how to keep them and staff safe from a virus that spreads by face-to-face interaction.

“If you have the same or greater number of students on campus, but you have a requirement to keep those students separated from each other… it’s going to really strain the university to be able to offer every student the services that they want,” Cantwell said. “Universities are going to have to try and manage this health crisis and manage distancing while providing services, probably doing it with less money per student than they had in recent years.”

There are now 14 new or ongoing coronavirus outbreaks in Michigan K-12 schools and colleges. Where are they? How many cases? The state still won’t provide that information.

The public can now see what K-12 schools and colleges in the state have coronavirus outbreaks, thanks to new state reporting championed by Bridge Michigan and other media outlets. There are now more than 1,300 college cases. 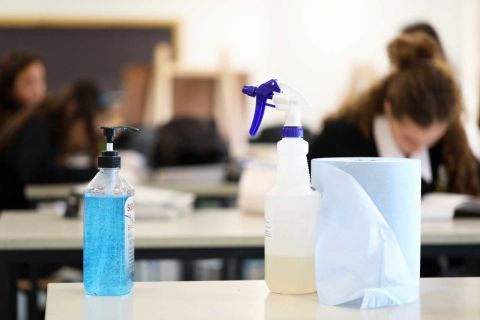 The state’s announcement follows weeks of pressure as many parents must decide whether to send their children to school or have them learn from home. State officials did not include colleges in its decision.

Sophia Moon’s article on fall college enrollment was interesting. I’m wondering why Wayne State University was not included. WSU is the third largest research university in Michigan with the largest enrollment of non traditional and minority students. It should have been noted how the virus has effected their plans.

Wait until we hit 200,000+ deaths in a couple months. Unfortunately large groups of people believe the story that covid just disappeared and they are not taking it seriously anymore, acting carelessly.

So cases can very well increase dramatically in the fall from where they are now, now that we have flattened the curve, especially with increased summer travel to our state. Many people will come to Michigan thinking it is safer here. All those people will contribute to increasing the number of local cases.

Now imagine how students and parents will feel starting school earlier, like in August, and then having everyone learn about much higher death counts in October. It will be a huge mess, like we saw a few months ago, with potentially sick students forced to return home for online classes. We should not start in-person classes in the fall just to grease the economy and bow in adoration to college sports.

There is reason to believe things will be very bad:
https://www.cnn.com/2020/06/16/health/us-coronavirus-tuesday/index.html