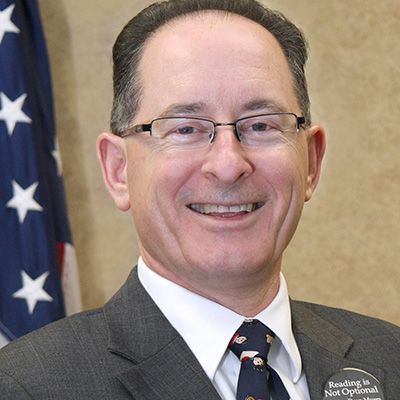 Michael Rice seldom shied from providing his blunt opinion on education issues as superintendent at Kalamazoo Public Schools. On his seventh day as state superintendent, Rice made it apparent he’d be just as blunt as the state’s top voice in education.

In an Aug. 8 interview with Bridge, Rice seemingly broke with Gov. Gretchen Whitmer on whether to close Benton Harbor High School, suggested the state is overhyping the need to go to a four-year college, and said the Legislature must open its checkbook and spend more on education.

This interview has been edited for length and clarity.

Bridge: You’re taking over as the state’s top school leader in the middle of a controversy over Benton Harbor Schools. Gov. Gretchen Whitmer proposed closing the high school because of bad academic performance and huge debt. Should Benton Harbor High close?
Rice: No

Bridge: You seem to be putting yourself crossways with the governor on this.
Rice: I don’t think so, because strictly speaking, I don’t think that was a proposal; it was more, you have a deficit, here is one way of approaching it.

Bridge: You’re a proponent of expanded career and vocational tech opportunities for students. Why?
Rice: I think we've oversold the four-year college experience. That’s not to say that university education is a bad thing, university education is tremendously important. And I'm the wrong person to argue against higher education. On the other hand, everybody is not interested in going to college for years, and everybody's not interested in a career that requires four years of higher education.

We ought to be about exposing children to a wide range of jobs so that they're aware that these jobs are out there. You may or may not have wanted to be a welder when you were growing up. Similarly, for me. It helps, though, to know that there's such a thing called welding, and the requisite background to become a welder, this is what you can (earn), these are the conditions, this is what you get to do.

I’m a proponent of summer literacy programs. … [and] there should be universal 4-year-old preschool, which you see not only a focus in a number of studies, but also directionally where the governor wants to go.

Bridge: Would that be universal free pre-K, or a sliding scale cost based on income?
Rice: One could easily argue for a sliding scale. I think that's legitimate. But there ought to be a reasonable enough sliding scale that you don't inadvertently exclude people. Because, you know, the idea that simply because someone is defined as middle class that they have the wherewithal to send their 4-year-old to pre-K is not necessarily the case.

Bridge: Gov. Whitmer has proposed a K-12 budget that relies more on a weighted formula for school funding than past budgets – giving more money to students who are in groups that take more financial resources to educate, such as low-income students and English language learners. Do you favor a weighted formula?
Rice: There's no question about it. This is a big deal. This is a game changer.

Bridge: There’s a growing teacher shortage in Michigan that is leading to a vast increase in the number of long-term substitutes, who often have no teaching background, leading classrooms. Is that a concern to you?
Rice: We have a number of shortage areas; in subject areas, geographical areas. It is increasingly adversely affecting the profession and, by extension and more importantly, young people.

It’s a problem that's been at least a decade in the making, and it is going to take the better part of the next 10 years to reverse it. But we have to reverse it. The future of the profession and more importantly, the future of young people, really depends upon it.

Bridge: What’s an issue in schools the Legislature doesn’t have a keen awareness of yet that needs more funding?
Rice: Student mental health. Educators know this is an issue. Increasingly our citizens realize that this is an issue. I don't think our legislatures nationally have caught up to this.

Among practitioners, they know that there are a lot of young people who are struggling with anxiety, who are struggling with depression, who are struggling with more profound mental health challenges. And we’re increasingly seeing it in these very powerful moments - Dayton, El Paso, Newtown. (But) much of what we experience in schools isn't extraordinary, isn't genocidal. It's just the garden-variety child who feel so depressed that he can't get out of bed, or the child that feels so anxious that she's uncomfortable going to school because she doesn't know how to navigate the hallways.

I want to work with educators, with doctors, with associations, to drive up the consciousness around this.