Lumber shortage a crisis for Michigan home builders and their customers

July 27: 5 things to know about buying a house in Michigan in real estate 'crisis'

Builders aren’t the only ones wondering how high the skyrocketing prices for wood will go after they set new records weekly in April.

“Normally, owning a lumber yard is not hip or cool,” said Doug Mans, president of Mans Lumber and Millwork, which operates four stores and a kitchen showroom in southeast Michigan.

North American timber harvesting and mills haven’t caught up to demand generated during the pandemic in 2020 as homeowners took advantage of low interest rates and, for many, money saved during lockdowns to tackle remodeling projects or build new homes.

After a wave of increases last fall, prices for lumber are escalating again, setting new highs this month just as the national construction season starts. The situation is leaving many Michigan builders and suppliers wondering if they’ll be able to buy what they need to meet peak sales this summer.

“We don’t think in the next six month that there’ll be a lot of relief in sight,” Mans said.

Builders say they paid about $250 for 1,000 square feet of framing board just before the pandemic. Now, according to tracking from the National Association of Home Builders, the futures market for that wood jumped to $850 in March, then leapt again, hitting $1,420 on Monday.

The increases will be felt by consumers working on small home remodeling projects, Mans said, though they should be able to find supplies.

But the ripples of lumber costs that have tripled or more over recent months threaten multiple aspects of new construction, beyond availability and cost of the 2x4s and 2x6s used for home framing. Wood products account for an estimated one-third of most homes built in the United States, according to industry estimates.

That means spikes in lumber prices are not just a building industry worry: They also represent another blow for housing affordability, adding as much as $24,000 onto the price of a typical 2,000-square-foot house, said Michael Stoskopf, executive director of the Home Builders Association of Southeast Michigan.

An increase of that amount would make that home unaffordable to an additional 57,432 U.S. households, according to an industry analysis,  Stoskopf said.

For an industry that’s already struggled with material costs and a state where housing affordability is an escalating problem, the wood situation is “clearly reaching crisis proportions,” said Bob Filka, executive director of the Michigan Association of Home Builders.

“We’ve got to get it under control.”

Rich Kligman, owner of Superb Custom Homes, said his pricing model of actual cost plus a percentage for profit, called “cost plus,” insulates the company from risks of fixed-price contracts amid supply price volatility.

However, he’s witnessing what clients go through when they learn the impact of wood costs on what many consider their dream home. 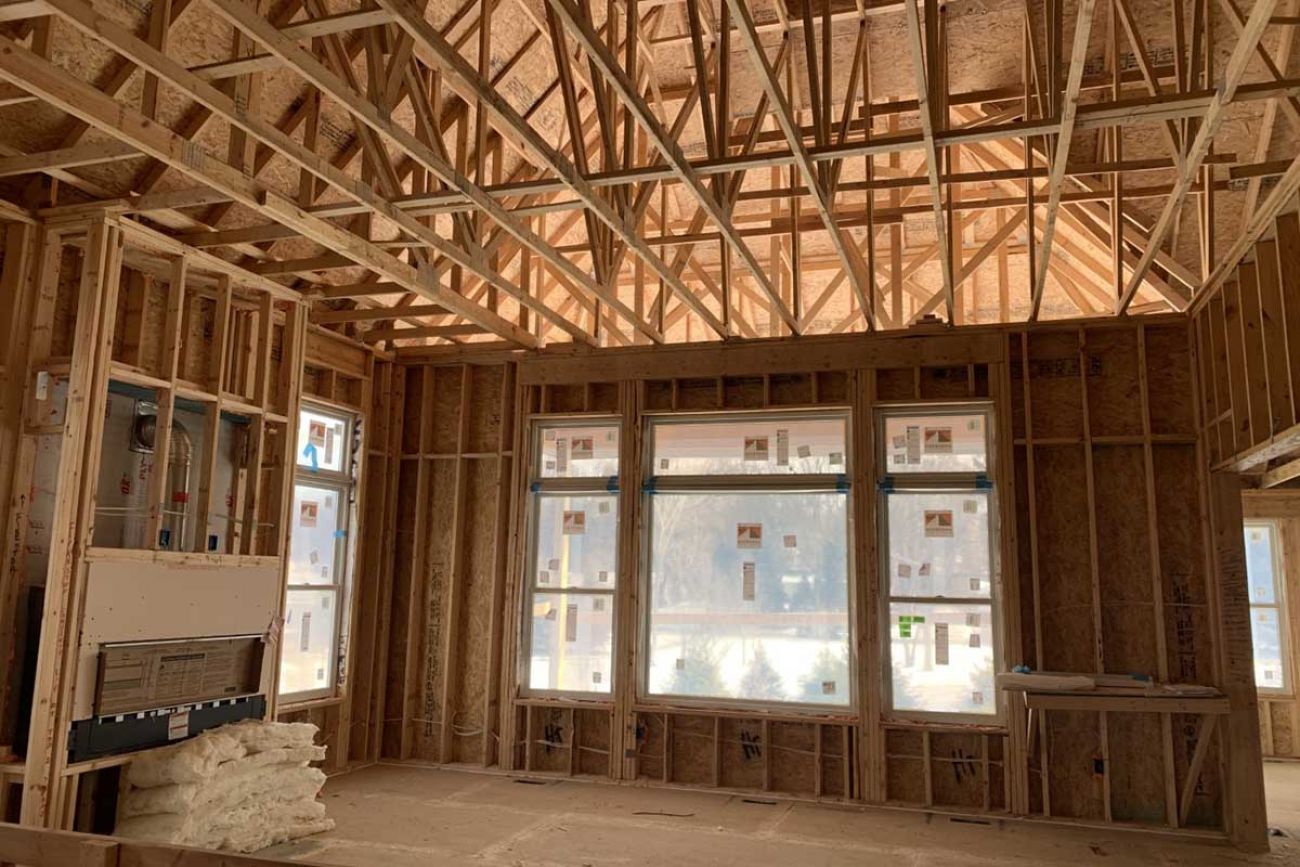 Supply shortages have stretched the time it takes to build a house. (Submitted photo)

One couple, he said, originally budgeted $135,000 for lumber on a larger home.

As a result, buyers who have to stay on budget are scaling back other parts of the project, and that can also threaten to affect Kligman’s bottom line, depending on how far the cuts reach. Framing wood is the most obvious cost, but other wood products are vulnerable to increases at the same time, creating more uncertainty for builders and their clients.

“We’re hearing so much complexity around lumber,” said Kligman, whose company works on custom construction and large remodeling projects in metro Detroit.

Plywood used for subflooring, for example, “used to be $25 per sheet,” Kligman said. “Now it’s $100. These are extraordinary increases.”

Lumber factory closures during the early months of COVID-19 — whether ordered by government or due to outbreaks — affected supply, said Stoskopf of the Southeast Michigan home builders.  Another complication is the limited annual wood harvesting seasons, which typically occur in summer and winter when heavy equipment can reach the trees without risk of getting stuck. Forest fires in summer 2020 further constricted access to the lumber supply in northwestern and western states, Stoskopf said.

The spike in lumber prices comes nearly a year after the building industry suffered from months of other shortages: Refrigerators, drywall, windows and products that rely on resin, like PVC pipes, all have been in short supply. Now roofers are watching insulation availability, while builders are keeping an eye on kitchen cabinets. One-gallon metal paint cans may be the next scarce trade product, according to the paint industry.

“There are a bunch of factors that are out of control,” Stoskopf said.

The timing raises concern for the industry that is still rebounding from the Great Recession. New construction permits in Michigan totaled about 45,000 units in 2005, before falling to 5,000 in 2009. In 2019 and 2020, the industry reached 15,000 units per year, adding to the state’s job base and housing stock.

Stoskopf told his members this month that the price hikes could result in fewer contracts for them to build new homes in 2021, despite starting the year forecasting an increase over 2019.

The potential of a stalled rebound during a hot real estate market fueled by still-low interest rates is disappointing a year after construction was shut down for two months by the state due to the pandemic.

“We’re off to a good start (this year),” Stoskopf said. For example, he said, Macomb County had its highest number of building permits issued in March since 2006, and the four counties of Macomb, Wayne, Oakland and St. Clair in southeast Michigan all were ahead of projections.

However, he said, “the material price volatility is going to make it extremely difficult to sustain.”

Larger regional builders in Michigan and national builders active in the state, like Pulte and Toll Brothers, expect to retain their access to framing supplies if supplies tighten further, said Darian Neubecker, senior vice president at Robertson Brothers Homes, based in Bloomfield Hills in Oakland County. The company expects to increase its sales up to 35 percent in 2021 to about 250 homes. 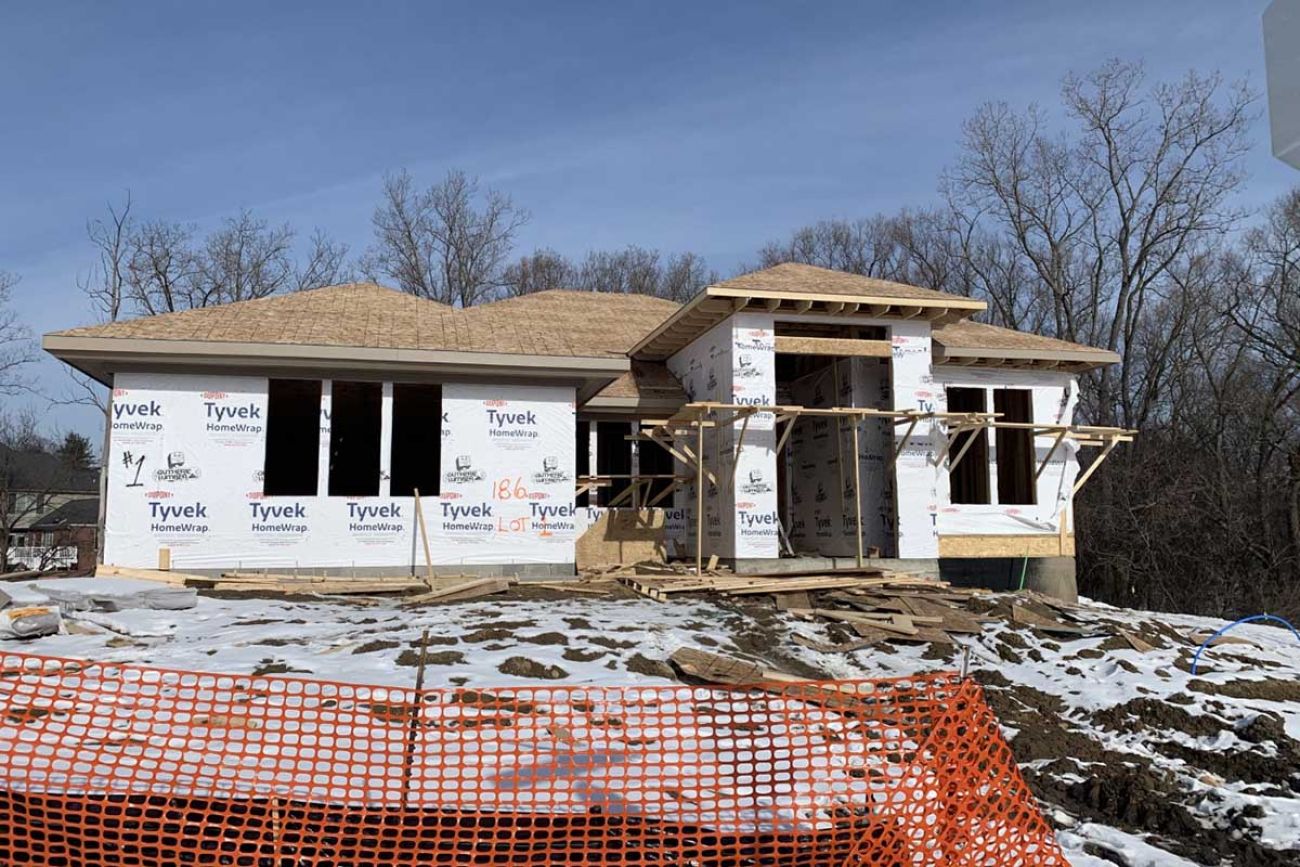 Wood-related products fill a new home. This one is under construction by Robertson Brothers Homes, which works in southeast Michigan. (Submitted photo)

However, he said, “we’ve defined the exact lumber needs on a (home) package, and we’re only ordering exactly what we need.”

Smaller builders would feel the supply pinch sooner, Neubecker said, and could face extending construction timelines if they can’t source their materials.

On the other side of a lumber purchase, Mans Lumber is receiving allocations of lumber from his suppliers based on his company’s size and annual sales, Doug Mans said.

“There’s only so much product we can order in, even if we want more,” he said. Mans is setting limits on purchases, he said, “which is something I never had to do before.”

Seeking help from the government

The situation is the top agenda item for the National Association of Home Builders as it plans a virtual lobbying day for members with their local Congressional representatives on May 3.

The national trade association signed a letter on March 12 that was sent to U.S. Commerce Secretary Gina Raimondo, asking that she examine the lumber supply chain, “identify the causes for high prices and supply constraints, and seek immediate remedies that will increase production.”

“The potential for housing and construction to grow and lead the economy is limited as long as lumber remains expensive and scarce, and the ramifications for job growth are significant,” said the letter, which also was signed by 34 other national industry groups representing real estate, finance and nonprofit organizations.

Filka, of the Michigan builders group, said he thinks the situation won’t be solved without federal attention. His members are speculating about “price-gouging and collusion,” he said, though they haven’t found evidence of it. However, trade issues between the softwood industries of the U.S. and Canada have persisted for years, Filka said, and any policy solution is likely to come at the federal level.

In Michigan, the cost increases keep housing affordability — from rental to new construction — in the spotlight, Filka said, as new and bipartisan housing legislation is introduced, including measures that would create so-called attainable housing districts and expand Neighborhood Enterprise Zones.

“The biggest issue in our industry is creating the ability to have attainable new housing options,” said Neubecker of Robertson Brothers.

“You just can’t keep passing costs onto consumers,” he said. “People buy houses on monthly payments. As you escalate prices, you’re able to sell to a smaller and smaller pool of prospective residents.”

Rising costs over the past year have had a direct impact on low- to moderate-income homebuyers in Michigan, said Katie Bach, spokesperson for the Michigan State Housing Development Authority.

“Because of the increased costs,” Bach said, “buyers that may have been entertaining the idea of purchasing a new build are finding them out of reach.”

In turn, those buyers are turning to existing homes, but are encountering skyrocketing prices there, too. The average sales price in 2020 across the state was $220,916, an increase of 12 percent from a year earlier due, in part, to listings dropping by half as of the start of the year.

“The issue of the lumber prices is being compounded by the current sellers’ market, which is experiencing extremely low inventory and multiple buyers making offers on most properties, sellers accepting cash offers and getting above list prices for their homes,” Bach said.

People looking at the lower end of the markets are struggling “to compete in that type of real estate environment.”

No one in the building industry knows how high the lumber costs will go, or when they’ll start to decline.

“It’s not sustainable,” said Kligman of Superb Custom Homes. But as more supplies become available, prices should stabilize, he said.

In the meantime, builders are writing contracts with escalation clauses to cover potential additional lumber increases and hoping prices stabilize this year.

“This is not a normal marketplace right now,” Filka said. 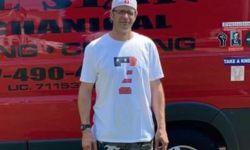