Michigan’s leading proponent of improving workplace culture now spends his days in the basement office of his Ann Arbor home, where he’s learned to embrace changes that he never thought possible.

Rich Sheridan describes himself as “an executive in exile” as the cofounder of Menlo Innovations starts his second year of trying to keep his team — built on extreme collaboration — connected to each other as they work remotely.

Somehow, it appears to be working.

The Ann Arbor-based software company built an international reputation as a place that rewrote what an office space should look like, and at the same time increased both productivity and happiness in the workplace. Sheridan wrote books like “Joy, Inc.” about the experience, and became an expert in cultivating creativity and job satisfaction.

Within weeks of having employees work from home instead of the famous Menlo office in downtown Ann Arbor in March 2020,  Sheridan and co-founder James Goebel found themselves in the position of CEOs across the globe: simply trying to keep their business alive during the pandemic.

But they also had to consider their workforce, which visitors from around the globe would call “the together team.”

“We’ve been this place where you work in a big, open room, shoulder to shoulder, share a keyboard and mouse, pass a plastic Viking helmet around the stand-up meeting where everybody is sharing the same object,” Sheridan said. “All of that had to stop during COVID.”

The number of in-person visitors from other states and countries stopped, too, going from 4,000 people per year who wanted to see the Menlo difference in person, to zero. 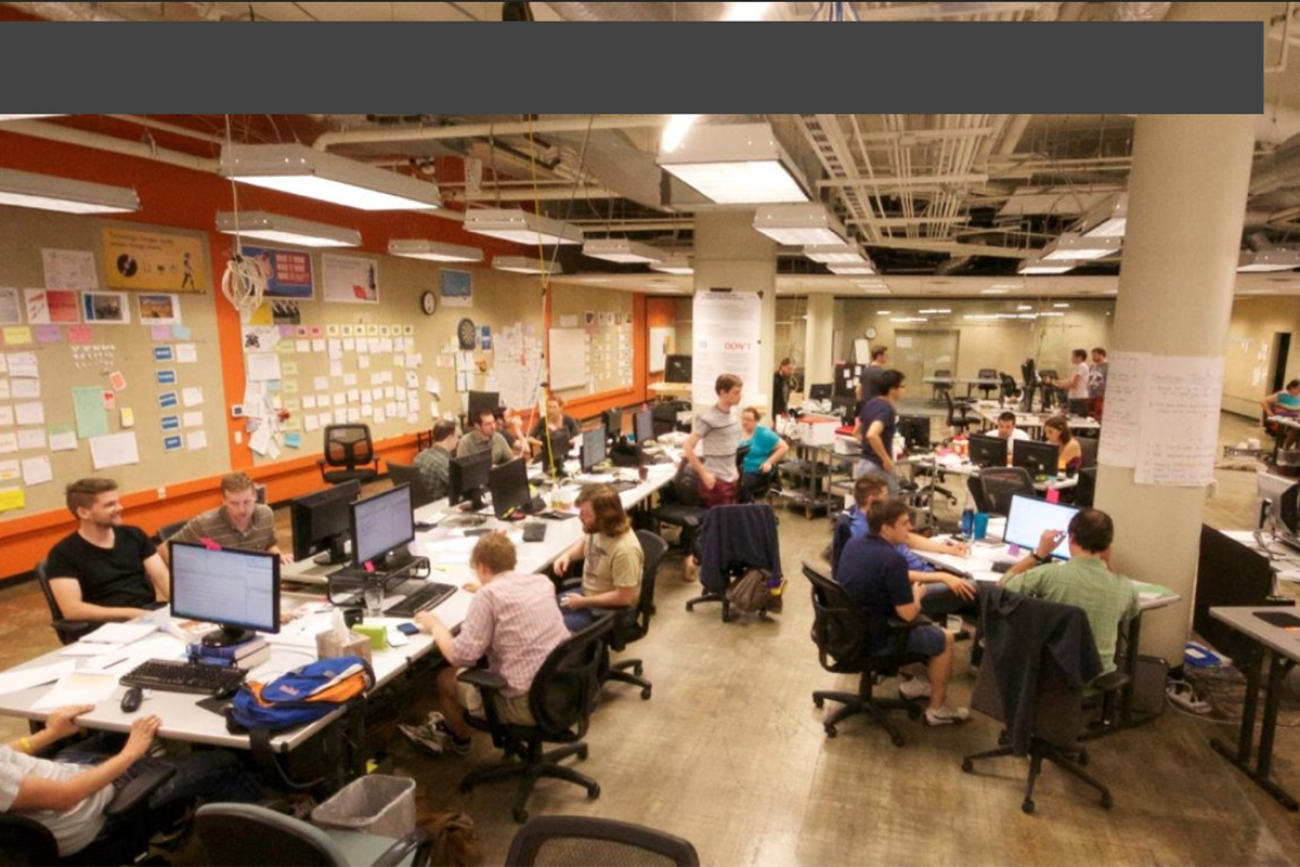 Proximity and personal contact were hallmarks of the Menlo office space before the pandemic. (Courtesy photo)

Creativity quickly took a backseat to decisions that could keep the company afloat.

A year later, Sheridan once again is considering how to make workplaces home to the same joy that he built over 20 years at Menlo. But now the mix includes adaptability and a willingness to consider challenges Sheridan never thought he’d have to think about. Among them is how to communicate better through technology, something the tech company didn’t embrace before the pandemic.

Sheridan is hopeful that other companies, like Menlo, will use their COVID experiences to once again thrive. Sales are increasing so far this year, and he credits the adaptability of his team. 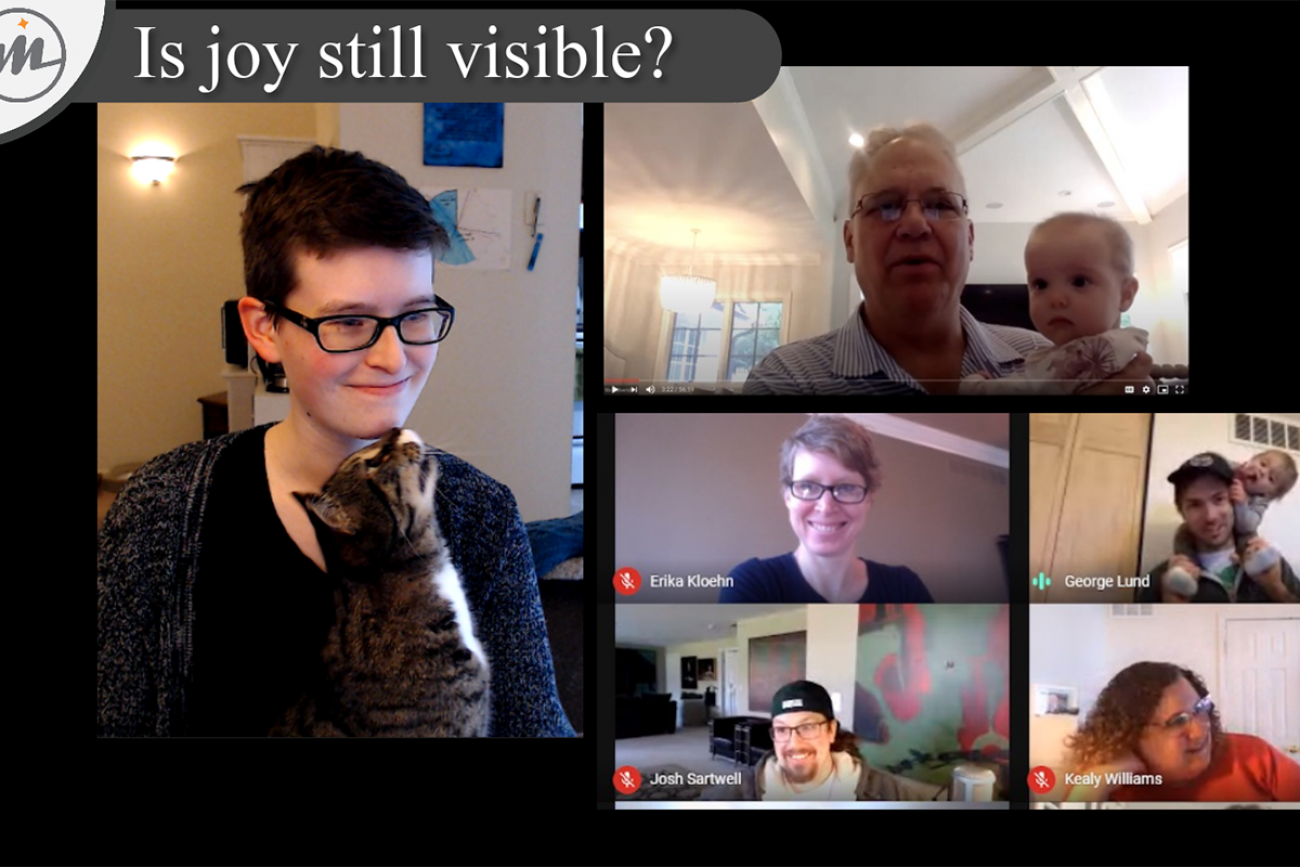 I’ll admit to feeling a bit of panic when all of this started. It changed some of my personal beliefs. I don’t know what we will come back to next.

I will not say that I entered the pandemic with an open mind. My belief at the time, probably like many of us, was like eight weeks, then we’ll get back to work… It became very clear, very quickly that it wasn’t going to be eight weeks. We don’t even know if eight weeks from now we’ll be back in the office.

Once I got not only to that acceptance but to embracing that change, it opened my mind up to new possibilities. Now I’m looking forward to what I’ll call post-pandemic Menlo.  I’m very open-minded.

We were a company that lovingly embraced what we called high-speed voice technology. You know, the ability to be in a room together and just say, “Hey, Paula.”

It’s enlightening to figure out what we didn’t give up. At Menlo, we work in pairs — two people, one computer, sharing a keyboard and a mouse. We did not give that up.

We’re still paired. … And our daily standup meeting is a Zoom meeting. This is what Menlo looks like, every minute of every day.

There are things that work much better when we’re all together. Our visual management systems — there are all of these paper-based planning systems. We had to figure out how to do that electronically. And we did, very quickly. The adaptation of our team was delightful, remarkable, uplifting. I was encouraged.

But that’s not all you had to worry about, I’m sure.

It would be neat if it was just simply a change of venue. Now let’s layer on top of that the economic impact.

PPP loans (came) to the rescue. We got two of them. One early on was like oxygen. The second one felt more like food … to get us thriving again. All of the big companies that were using us pulled back and said they had to hang onto cash, so we had to hang onto cash as well.

In your culture, laying off must have been heart-breaking.

Oh, it was. We’ve never done anything like that before. We were patient about it. We used every tool in the book that we could to keep people. We cut pay, we cut hours, we kept people on health insurance, so they could count on that.

You’ve been known as a CEO who sat amid your team. How did you get past that while working ‘in exile’?

That was something the team noticed right away. They were doing their daily stand up meeting (which used to be in person and moved to Zoom). The team very quickly said, “Hey, we don’t see you and (co-founder) James (Goebel)  like we used to. We used to enjoy having you in the room and connecting casually.”

We established, within two or three weeks, a Thursday lunch with me and James. The team could bring their food, get on Zoom, and talk to us about stuff.

As we were going through tough economic times, we turned up the dial on our open-book finance to make sure everyone on the team knew where we were financially. That was a nice, new pattern of communication.

There’s some irony in a tech company suddenly turning to technology to communicate.

We jettisoned our phone system, the switchboard and phones around the office, and we signed up with Zoom to take over our phone system. If you call our main number, it’s actually a Zoom call now. It’s less expensive than the phone system, and they let us give everyone a personal Zoom account.

That makes everything face to face?

Yes. I think the voice call is going to be like fax machines. We’ll think it’s a quaint reminder of … before when everyone did video calls.

I hear people expressing distaste for video calls. Yet that’s not happening there?

One of our things that I noticed is that we’d gotten more connected to our people than we ever had. We saw more of their lives. We had dogs at Menlo, we never had cats. We now see cats galore. Then the babies of Menlo — we’ve had 25 in the last 13 years. The babies come in with the parent and they’re with the parent all day long, until they’re about 7 or 8 months old. Now we get to see all the Menlo babies again.

How did it affect you when you had to shift from maximizing company culture to focusing on survival?

My wife will easily attest that I never have trouble sleeping, but my sleep was disturbed for probably nine months. I think it was a variety of things: The pandemic, the economy, the social issues going on that felt out of our control, probably some of our political discourse that felt disturbing and existential for us as a nation. But I’m sure the Menlo part was a big part of it.

If the PPP loans hadn’t come through, I don’t think we’d still exist.

It got that dire at Menlo?

That might be a little bit of hyperbole. But there are things that didn’t change for us, like our monthly rent payment had to be paid. There was no rent relief from our landlord, and when you’re used to supporting the rent payment over the team of 50 people, when it dropped back to 30 people, it became a big part of the monthly nut (along with) the health insurance payments and everything else we needed to do.

We still owed our $160 per month for parking spaces that nobody was coming into the office for. We just turned them all in. We have no parking passes anymore. We probably won’t, ever.

We were scrutinizing everything. We had three refrigerators in our kitchen. We emptied two of them and unplugged them. We got rid of the water cooler. We stopped custodial maintenance of our space. We told the team, we’ll take out our own garbage.

After all of that, what kind of permanent changes are you considering?

Literally the week of the governor’s (stay at home order) we were about to look at a new office space that was bigger than this one. Now we’re looking at it and saying, “Thank God we didn’t make any changes.”

We were looking to double our space. Now we’re looking at maybe half. We don’t believe we will go 100 percent virtual, but we’ve sure made it work for a year. This has opened up a grand set of new possibilities.

You’ve written about joy at work. Did you lose your joy?

I always differentiate between joy and happiness.... Joy is a much longer arc of hard work done well together. I’m sure in those first six to eight weeks, my partner heard me utter the word “retirement” a few times.

It’s not on the radar anymore, but it was a joyless time for me. But my optimism always says there’s a way out of this. We’ll just have to figure it out.

When did you know you were getting it back?

One part about Menlo isn’t about software — we do high-tech anthropology, a registered trademark of Menlo. It’s about understanding the people who will use the software we’re hired to build.

Early on, we got a new customer — and at that time, that was pure joy. … One of our high-tech anthropologists leaned over and said, “this will be so exciting to figure it out remotely.” And they did. The team adapted so incredibly well.

High-tech anthropology, sales, all of the in-person stuff — even our (virtual) tours went so well. It was just amazing to watch.

I worry that working virtually will suppress creativity. What’s different for your team?

How can you tell that workers are satisfied?

We literally reorganize the company weekly. We publish a schedule, with 10 “boxes” a week for each half day. We literally pair people and switch the pairs every five days.

All of these points were there before. They’re doubly important now.

There are many other gatherings throughout the week. I’ll just watch for playfulness. Do topics seem to be playful, or heavy? Joking around, camaraderie — that’s been Menlo’s tradition for all of its history and I think we’re relying on it more than we ever have.

They missed James and I, but what they really missed was each other. They set up a shared meeting sheet (of all daily meetings), put the links there and if anyone wants to join, they just jump in. Just like they would at Menlo. This was totally an invention of the team.

Are you seeing corporate mistakes when you see people talk about the future of work?

My attitude is that I don’t know what comes next. I’m not making any conclusions.… But our attitude about (people working from home) will be completely different.

This part of Menlo is going to stay for sure. I’m sure the in-person part is coming back, too.  But why would we ever stop doing the virtual part? 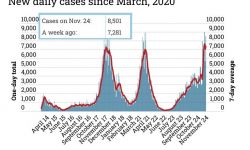