RIPLEY — Bethany Jones used to enjoy the crackling of thunderstorms. But the violent skies before dawn last Father’s Day gave her jitters from the start.

Kept awake by the constant thunder, lightning and “the hardest, loudest rain ever,” Jones, 48, paced the lower floor of her house. She shut the windows. Around 3 a.m., her partner, Jeff Foss, climbed the stairs from their flooding basement and beckoned her to the front porch.

That’s where they saw whitewater shooting down the hillside in this unincorporated town in the western Upper Peninsula. A narrow culvert next to their house morphed into a 150-foot wide river that rose above first-floor windows, knocked down trees and deposited her neighbor’s sauna across the street.

Jones dialed 911. Stay home, the dispatcher said. The roads were washed out.

“Get the kids. Run,” Foss shouted a minute later.

In a scene worthy of a movie thriller, Foss harnessed what Jones called his “250 pounds of pissed-off Yooper dude” and made several trips across rushing waters to carry everyone to safety, including the couple’s two children and 70-pound Lab, Janie.

Within days, an army of volunteers helped clean up homes, dig out cars and remove boulders that crashed down a hill in Ripley, a community just outside Houghton on the Keweenaw Peninsula.

“People just knew what needed to be done and did it,” said Jones, a marketing manager for Michigan Technological University’s performing arts center. “We got word by Friday that the National Guard was showing up, and we’re like ‘We don’t need ‘em.’”

Forged in its harsh winters and hardscrabble mining past, this region’s resilience has shined in its response to the worst flooding in recent memory. But a full recovery could take years. Even with help from Lansing and Washington expected following President Donald Trump’s major disaster declaration this month, local governments face major challenges in returning to normal.

The federal declaration doesn’t include aid for flooded-out homeowners. Local nonprofits are offering help, but officials worry some proud Yoopers won’t take it.

“Part of the pitfall of that pride and strength is our inability to recognize when we need help,” said Kevin Store, executive director of the Hancock-based Portage Health Foundation, which is leading relief efforts for families.

And tourism in this region dubbed Copper Country is still ticking, although at a slower pace — particularly near washed out trails.

“There’s been an effort to get the word out that we’re open,” said Jeff Ratcliffe, executive director of the nonprofit Keweenaw Economic Development Alliance.

But dangers may lurk along unstable hillsides and some popular trails are still closed. Plenty of roads still need fixing, and flooding damage in some spots has taken weeks to emerge.

Families remain in limbo, including Jones and Foss, who are living with their children in graduate student housing at Michigan Technological University and unsure of what comes next.

“Once the camera crews stop, and once the stories stop being written, people think we’re good,” said Jones.

Houghton County, population 36,000, took the brunt of the first round of torrential rains this summer in a storm considered to have a 1-in-1,000 chance of occuring in a given year.

Nearly 7 inches of rain soaked some neighborhoods from 11 p.m. June 16 to 8 a.m. Father’s Day, according to the National Weather Service. That’s the equivalent of nearly 6 feet of snow in cold weather. 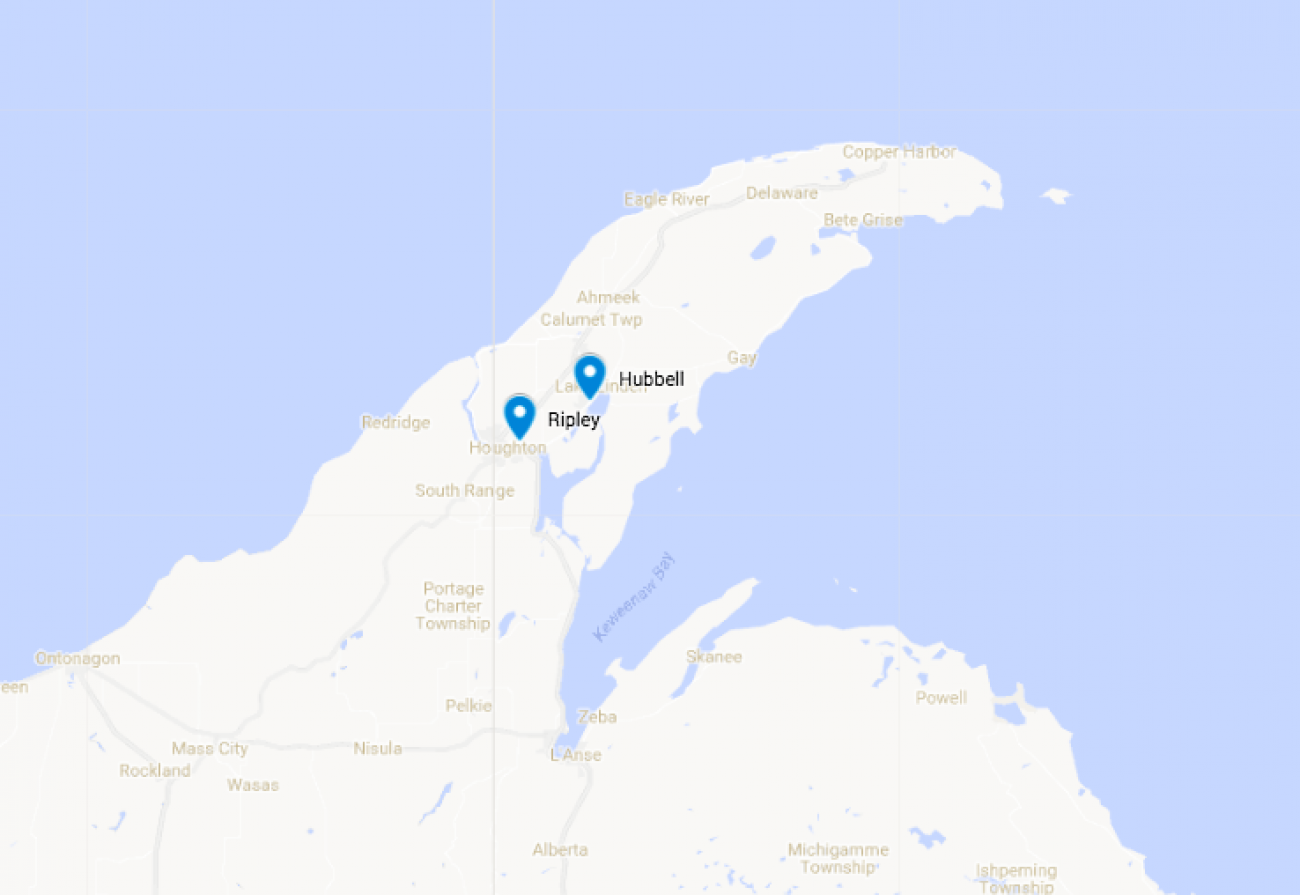 Creeks spilled, mud and boulders slid, roads crumbled and basements took on water and sludge. Residents spoke of portajohns swept away and at least one boat that wasn’t found.

Adding to the injury, several more inches of rain hit Houghton County in mid-July. The second round of flooding inflicted enough damage for Gov. Rick Snyder to declare a second disaster in the county— separate from a disaster declared in Gogebic, Houghton and Menominee Counties after Father’s Day. 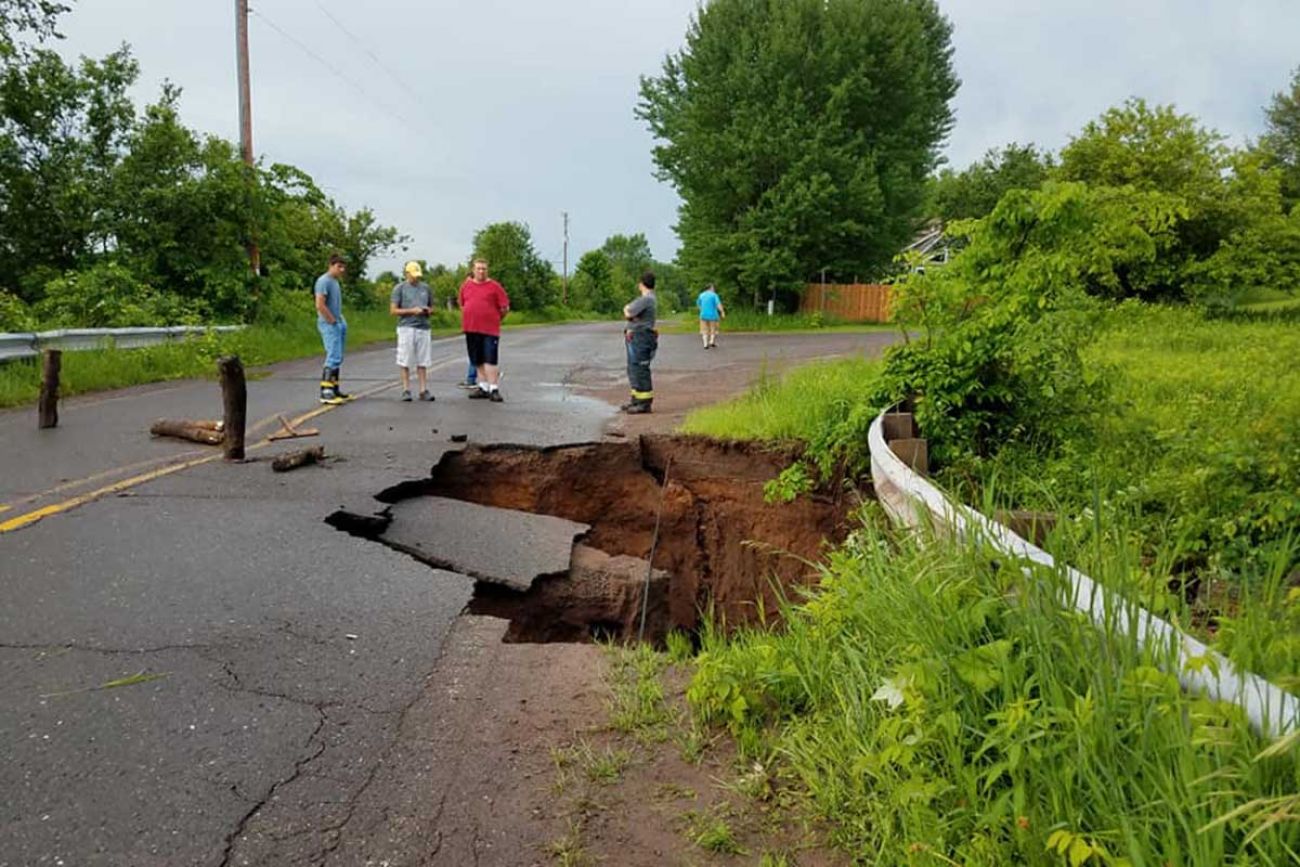 Drew Crouch said he’d never seen anything like it. The 65-year-old said he never had any flooding troubles over decades living in Hubbell, about 9 miles northeast of Houghton and along Torch Lake.

Crouch lost a washer-dryer set, water heater and and furnace when 4 feet of water swamped his basement. Crouch figures he’s out at least $5,000 — a significant tab for the semi-retired social worker who works part time in the county’s veterans affairs department.

“You just go with the flow,” he said from his lawn chair, watching as an excavator tore up a long-abandoned church across the street.

“What are you going to do?”

Crouch is among the vast majority of storm-struck Yoopers whose home insurance does not cover flood damage. And he lacks separate flood insurance because such policies are unavailable throughout Copper Country. 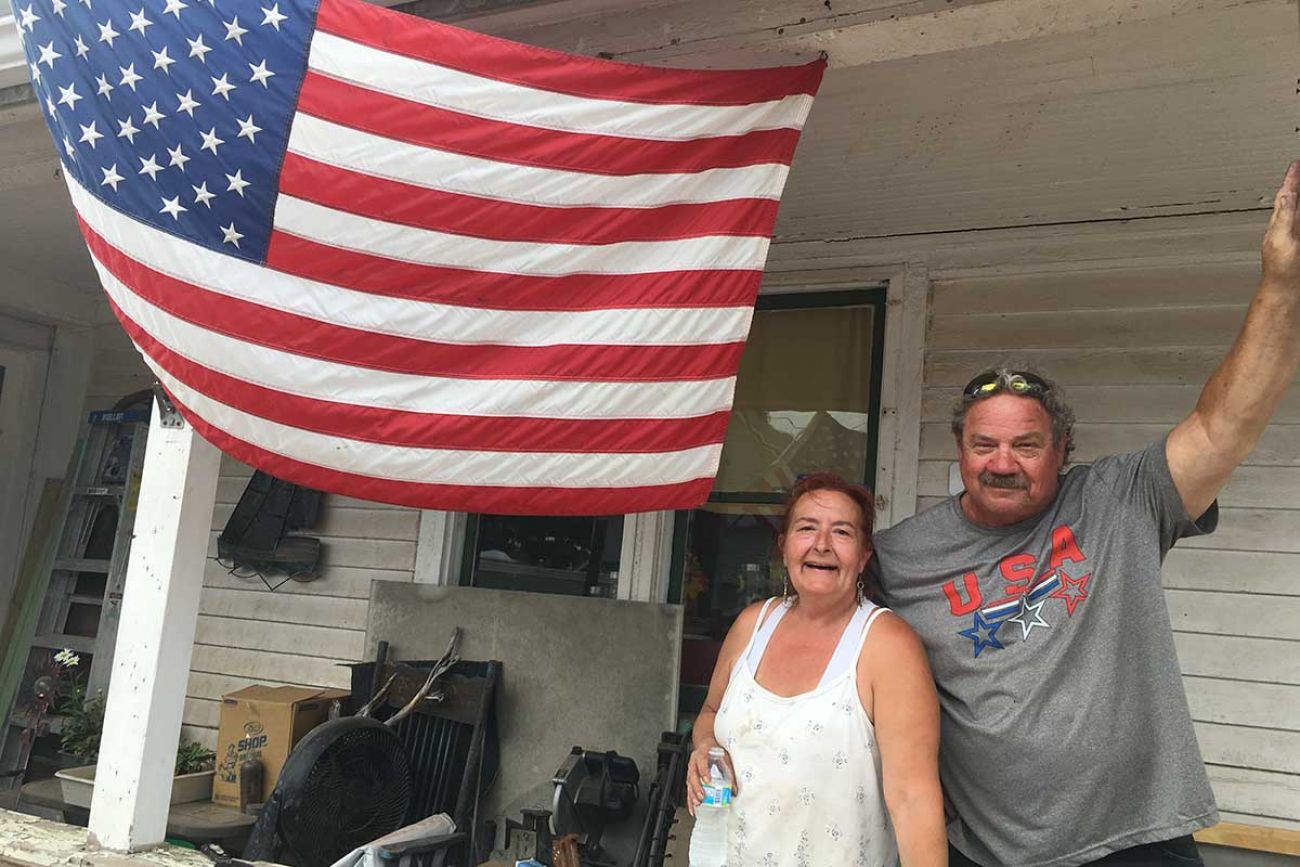 A few blocks away, Tammy Goral cleaned up a home she’s slowly been fixing for the past five years. She lives full-time more than 200 miles south, in Abrams, Wisconsin, and had planned to retire in Hubbell.

After the flood destroyed her furnace and everything else in the basement, though, Goral said she’ll have to delay retirement from her job running a tavern in Wisconsin.

“I didn’t want debt, but I guess it’s going to happen,” Goral said.

But the disaster had a silver lining: Yoopers swooped in to help.  First came a group of Mennonites from Pelkie, about 30 miles south. They wouldn’t leave contact information for anyone to send their thanks.

“Those guys showed up with trailers, skid loaders, shovels, buckets and young guys that worked their butts off,’” said Goral’s friend, Donne Hansen, who is helping her clean the mess.

“The whole community really impressed me.”

After the Mennonites cleared out, Hansen added, an eight-woman crew from nearby arrived with shovels and buckets.

Similar stories abound. Volunteers from Team Rubicon, a international nonprofit that responds to disasters, showed up 36 hours after the first round of flooding only to see find cleanup projects already finished.

In a strange way, Jones and Foss said the whirlwind week after the storm were some of the best days of their lives. Volunteers rushed to help. Foss was “like a pig in shit,” surrounded by friends and powertools, Jones said.

“We had the hardest drinking, smoking rough band of heroes you’ve ever seen,” she said.

Strangers and friends donated more than $10,000 to help. Michigan Tech is offering housing for up to 11 months.

But as the shock and adrenaline wears off, the family’s challenges are becoming clear.

All told, Jones says the family is out upwards of $300,000, between losing their home and 70 percent of their belongings. The rubble also destroyed the garage that housed all of Foss’ tools and his truck.

When will they find permanent housing? That’s unclear. Even if the federal government chips in aid for home repairs (it hasn’t yet), the couple isn’t sure it wants to return to a slope they now view as dangerous.

Their son Jack, who turned 9 after the storm, is fearing another flood and obsessing over the Weather Channel.

“It's affecting all of us different ways,” Jones said. “I know that I have been having a lot of anger coming out.”

Mary Sears, supervisor of Franklin Township in Houghton County, said she’s eyeing some $4 million in road repairs in her community alone — far above the township’s total budget of roughly $250,000.

President Donald Trump this month issued a major disaster declaration, freeing funds to fix public infrastructure and address other hazards. The aid will come on top of $2 million in emergency repair funds the Federal Highway Administration awarded in July.

But it’s unclear how much money will come from the feds and Michigan, said Dale George, a spokesman for the Emergency Management and Homeland Security Division of the Michigan State Police.

Roughly $44 million in destruction could be eligible for disaster aid (that includes damage not covered by insurance or other sources), according to a preliminary damage assessment, but that number could change as Federal Emergency Management Agency examines the region more closely.

The federal declaration will cover up to 75 percent of the cost of repairs. State and local governments are expected to cover the rest. And the money is likely to come in slowly, as federal aid is allocated for one project at a time.

“Without the federal declaration, a lot of things wouldn’t have gotten done around here for who knows how long,” said Eric Forsberg, Houghton County administrator.

But local budgets are exhausted from initial emergency work, and officials aren’t sure how they will come up with matching funds for the aid.

Houghton County is expected to foot $7 to $8 million — the county road commission’s entire annual budget — of its $30 million in known damages to more than 100 of its roads, Forsberg said.

“We still don’t know how many problems that are out there waiting to show themselves that are just under the surface of the street,” Bill Marlor, of the Hancock Department of Public Works, recently told the Daily Mining Gazette last after officials discovered a fresh sinkhole in the city’s downtown.

“So it’s going to be a while before everything becomes normal.”

Local nonprofits like the the Portage Health Foundation are trying to fill the gap, helping just more than half –  nearly 500 of 900 homes affected – with emergency repairs and replacements.

“We’ve got a strong work ethic, and very proud communities,” he said. “I think people are afraid to ask for help.”

Jones sees her neighbors trying to strike a “delicate balance” between their pride and long-term challenges that are only becoming more apparent.

“There needs to be an awareness,” she said, “that none of these funds come close to our losses.” 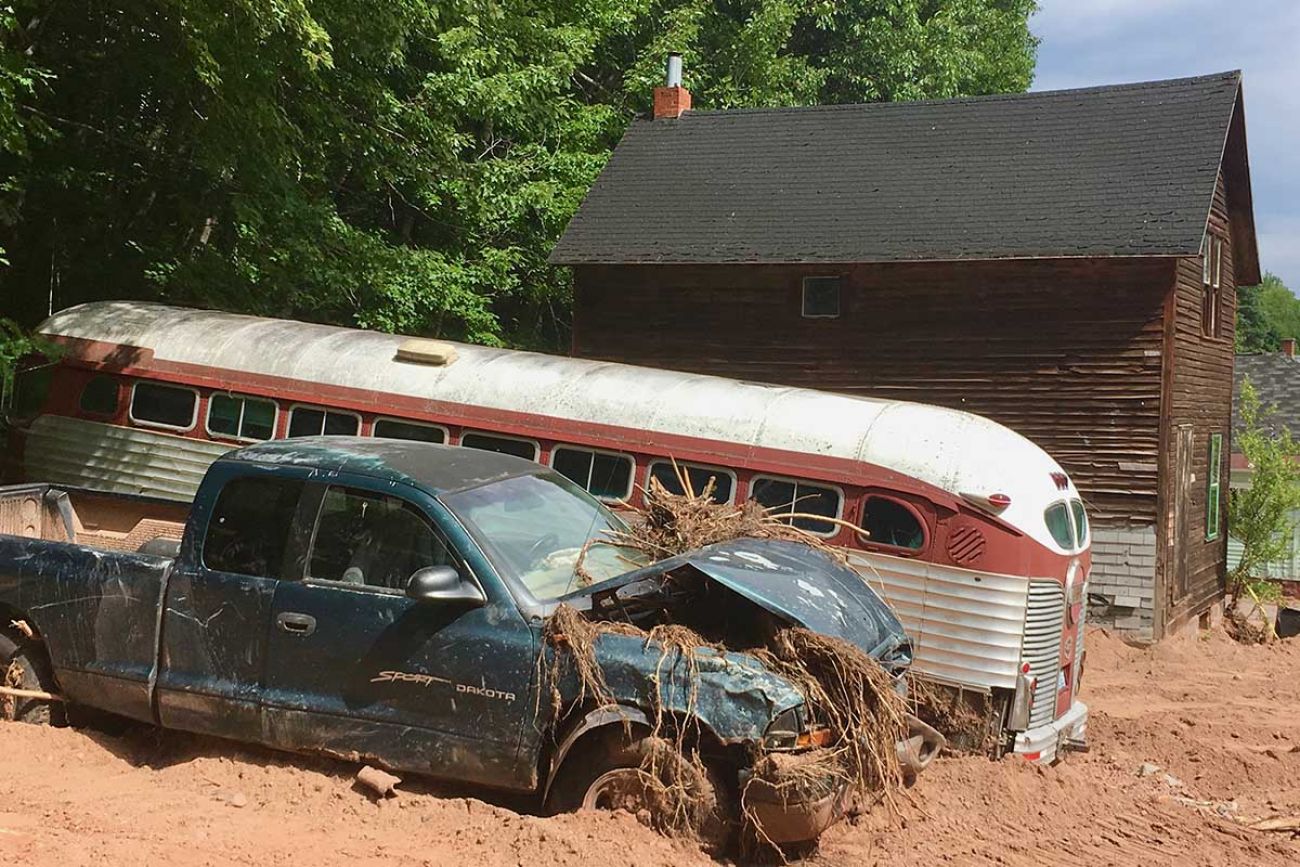