Land sale threatens public access in the U.P. Should the state step in?

The timberlands that cover most of Keweenaw County have helped fuel a world-class outdoor recreation scene. Now, a 32,600-acre chunk of that land is up for sale. (Photo courtesy of Gina Nicholas)
July 27, 2021
Kelly House (Email)
Michigan Environment Watch
Upper Peninsula

Michigan Environment Watch
Land sale threatens public access in the U.P. Should the state step in?

For generations, the private timberlands that cover much of the Upper Peninsula’s Keweenaw Peninsula have been treated more like public property.

Snowmobilers criss-cross them on trails and old logging roads. Hunters and anglers traverse them in search of catch. They’re a playground for hikers, bikers, birders, rockhounds and history buffs.

“There’s no place like it in the world,” said Gina Nicholas, 63, a Grant Township resident who has spent a lifetime in those woods. 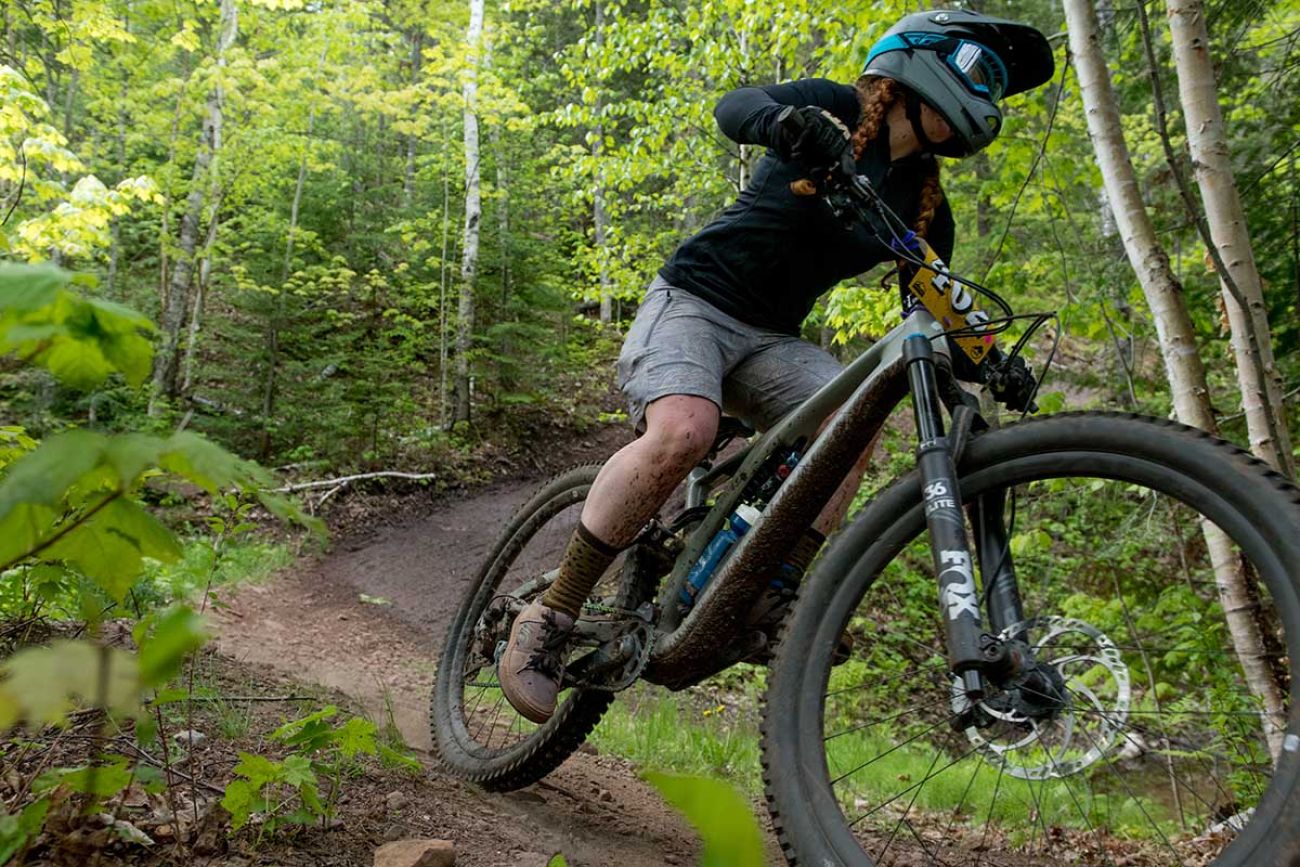 The Keweenaw Peninsula has become an increasingly popular outdoor recreation destination, owing in part to the vast tracts of land on which to bike, hike, hunt and fish. (Bridge photo by Eric Laabs)

But that longstanding tradition of access has suddenly become precarious.

Last month, the New York hedge fund that owns the land placed a large tract up for sale, threatening to fragment an unbroken swath of public access stretching from Copper Harbor to the tip of the peninsula. Asking price: $43.2 million for 32,661 acres, though the company has said it is open to parceling it off in smaller chunks.

Now, residents, public officials and recreationalists are urging state leaders to step in, hoping for a public land buy or other solution to prevent would-be buyers who might see the land as a development opportunity or an exclusive personal sanctuary.

The ask comes as U.P. outdoor recreation hits record numbers, fueling demand for protected space to roam. But it also comes as Michigan struggles to maintain the 4.6 million acres already under its management, and focuses on consolidating its landholdings and purchasing property lower in the state, closer to where the vast majority of Michiganders live.

As the owner actively seeks buyers, the solution remains unclear.

The Rohatyn Group (TRG) owns a huge percentage of the land in Keweenaw County, but those unfamiliar with the county plat map could easily mistake it for public property.

The company’s vast timberlands, once owned by the Calumet & Hecla Mining Company during the 1800s copper mining boom, have passed through many hands over the century-plus since. Keweenaw residents and visitors have maintained a consistent freedom to recreation there. 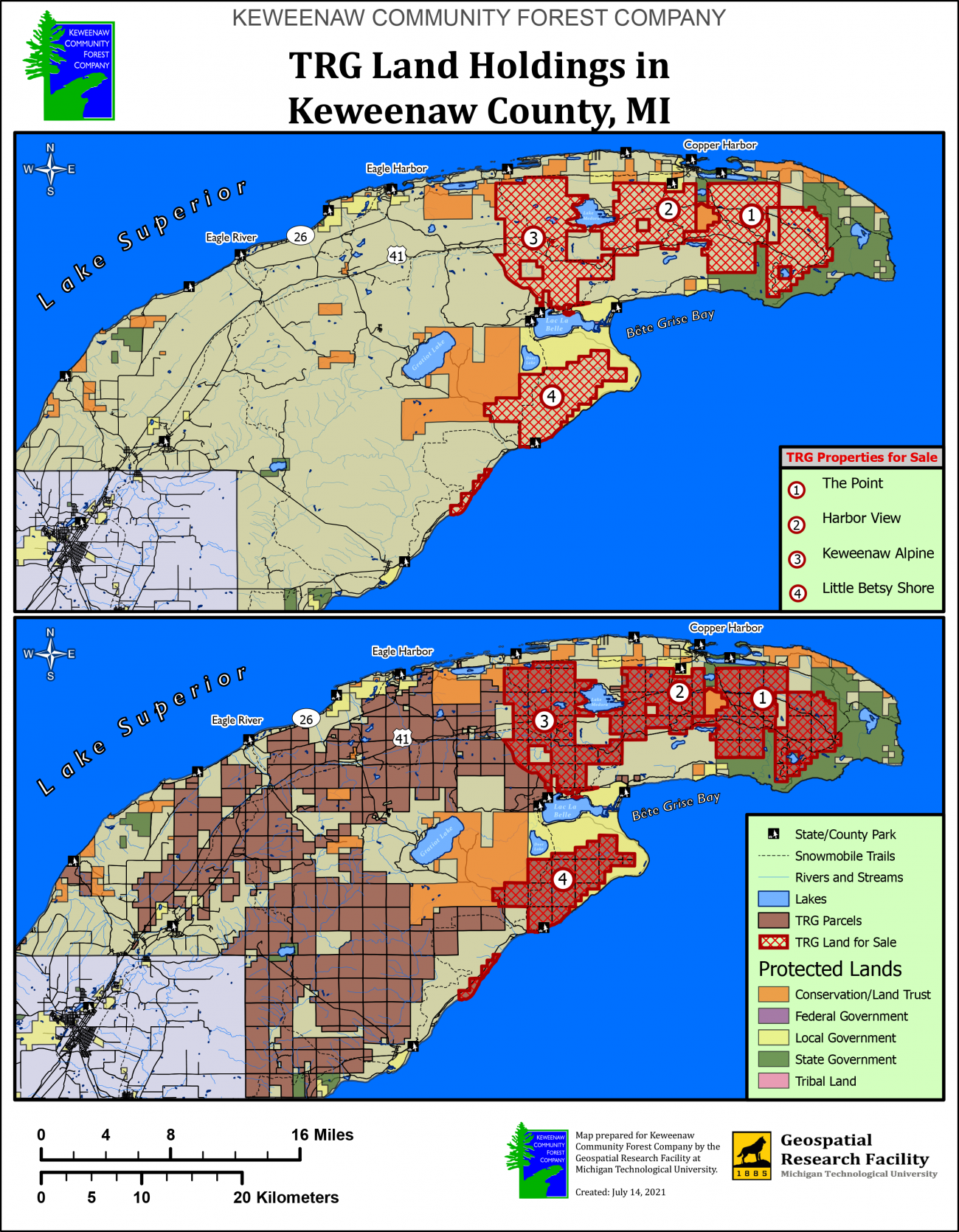 A map from the Keweenaw Community Forest Company shows where The Rohatyn Group, a New York hedge fund, owns land in Keweenaw County. The properties are now up for sale. (Courtesy of Gina Nicholas)

Those woods are also full of history, making them a draw to those exploring the ruins of old mining camps growing rootbound in the woods.

And as part of the ceded territory of Michigan and Wisconsin tribes that signed an 1842 treaty making way for those copper mines, the lands are frequented by tribal hunters and anglers, said Chris Swartz, President of the Keweenaw Bay Indian Community.

“In my opinion,” Swartz said, “the last wilderness in Michigan is the western U.P.”

‘Running against the clock’

Area residents had feared this day would come.

As land values rose in the Keweenaw over the past year, a group known as the Keweenaw Outdoor Recreation Coalition began lobbying the state to purchase 15,000-plus acres, in hopes of forming a permanent public corridor from south and east of Copper Harbor to a tract of state land at the tip of the peninsula.

Department of Natural Resources officials at the time said the land wasn’t a good immediate fit for money from the state’s Natural Resources Trust Fund, but the agency committed to taking a closer look, said Scott Whitcomb, the DNR’s senior advisor for wildlife and public lands.

Then TRG put the land on the market. A listing through the American Forest Management real estate firm vaunts its potential for development or conservation. 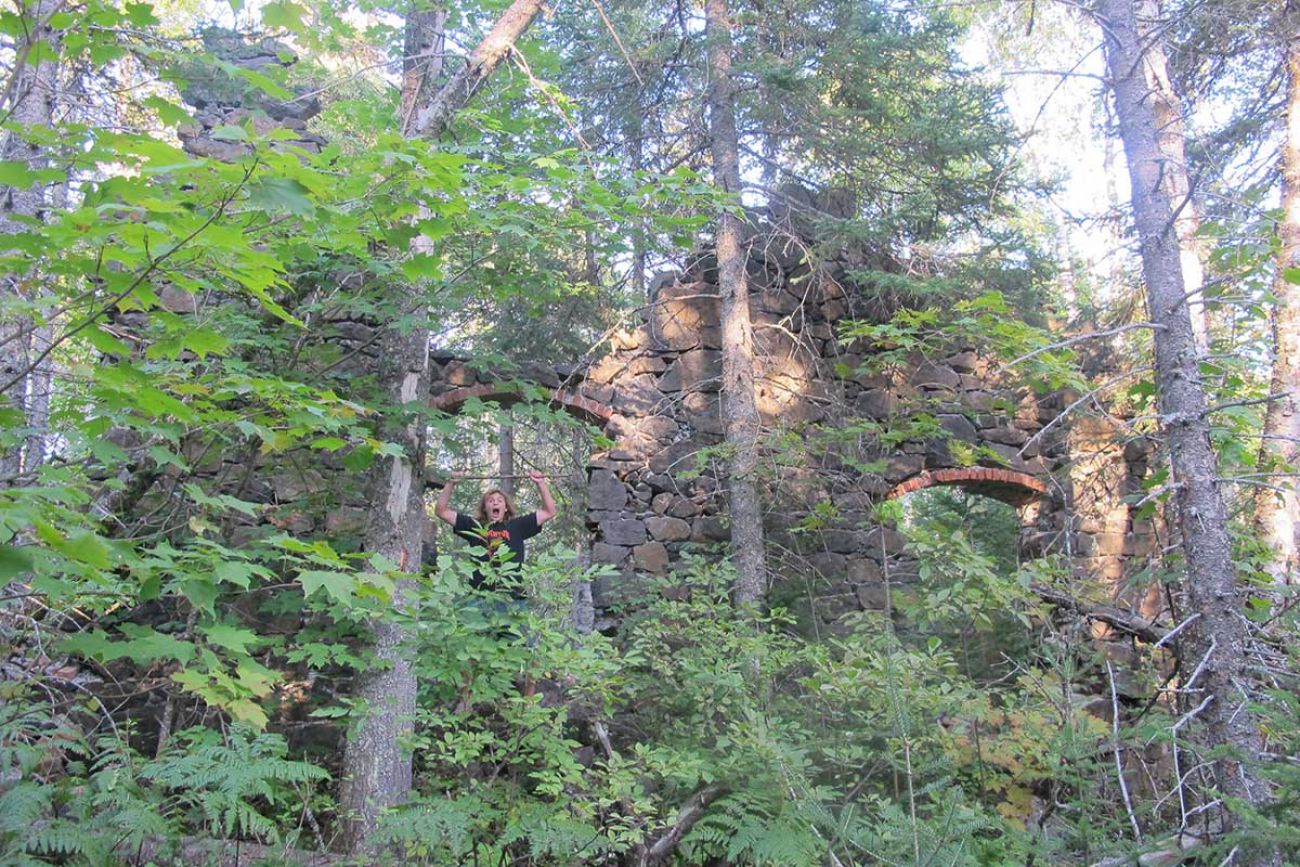 Mining ruins like the one in this photo dot the Keweenaw County landscape, including the TRG-owned lands now up for sale. (Photo courtesy of Gina Nicholas)

Alarm rippled through the community.

KORC sent an urgently-worded letter to Gov. Gretchen Whitmer on July 7, pressing her to use some of the state’s billions of federal pandemic relief dollars to buy at least 15,000 acres.

“We’re running against the clock,” Nicholas told Bridge. “If we don’t figure out some creative solutions, we’re going to lose this asset.” 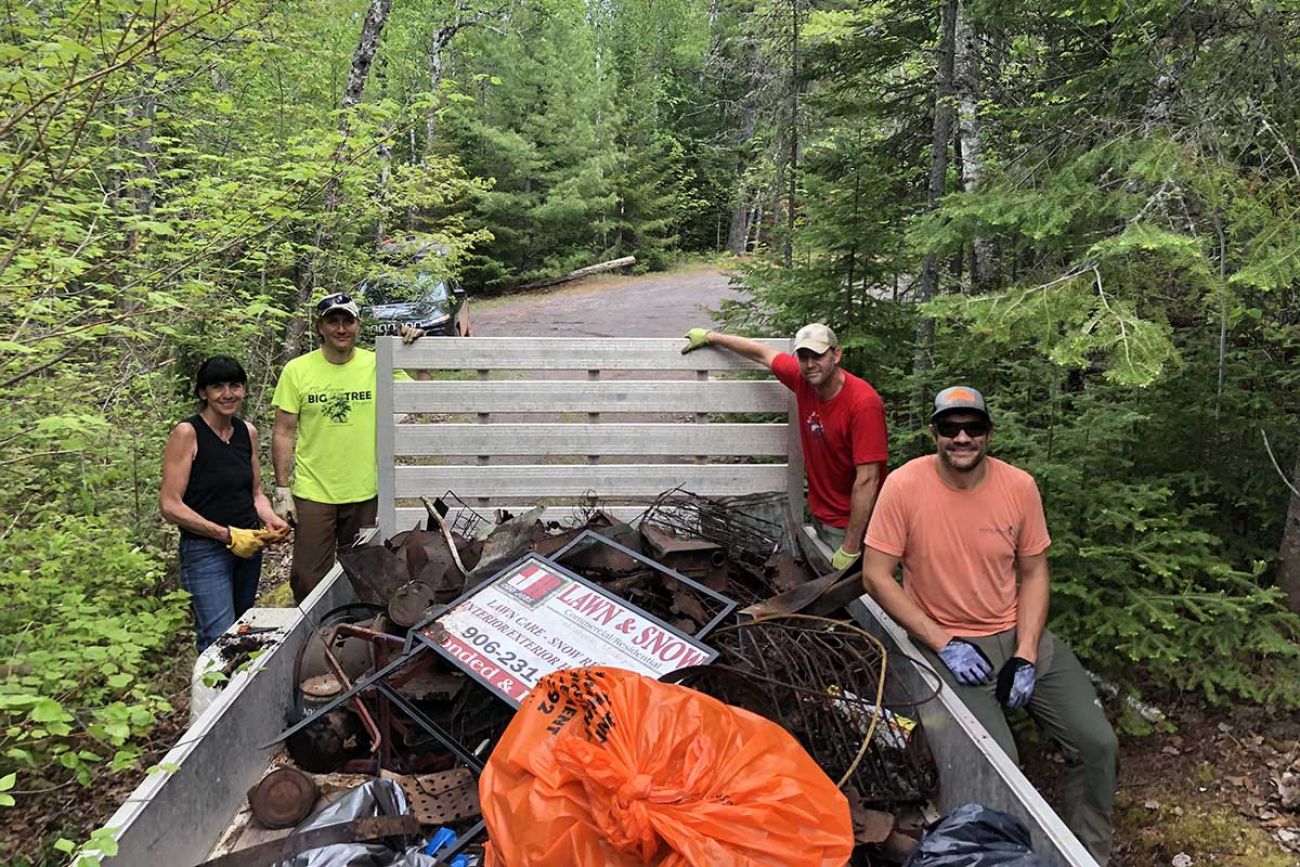 Gina Nicholas, left, and other members of the Keweenaw County Outdoor Recreation Alliance, at a clean-up event this year. (Photo courtesy of Nick Wilson)

Recreational advocates beyond the U.P. have begun to join the fight. The Michigan Trails Advisory Council this week is expected to consider a resolution urging the DNR to purchase some or all of the property.

“This is a once-in-a-generation opportunity,” said Jason Jones, an advisory council member and mountain biking advocate who is sponsoring the resolution. Without state action to preserve access, he fears a wealthy private buyer will parcel it off for development, or erect fences to create a vast private oasis: “Huron Mountain Club part two.”

Advocates for the land buy have an unlikely ally in Sen. Ed McBroom, R-Vulcan, a lawmaker who has at times criticized the state for hindering economic development in the U.P. by owning too much land.

McBroom’s predecessor, the late Sen. Tom Casperson, sponsored a 2012 law that briefly capped the amount of land Michigan could own.

But both McBroom and Rep. Greg Markannen, R-Hancock, have thrown their support behind the Keweenaw push, though McBroom said he still favors the idea of keeping overall state-owned land in the U.P. static by swapping the Keweenaw lands for acreage elsewhere.

“Those lands are really important to the Keweenaw continuing to draw the clientele that they are,” he said, a reference to the area’s growing reputation as an outdoor recreation hub.

DNR officials say they, too, have an interest in keeping the lands open to the public. But the question of how remains unclear.

Owning the TRG lands would also put Michigan on the hook to make annual “payments in lieu of taxes,” to local governments in recognition that state land ownership restricts development that could provide local property tax revenue.

And the latest state lands strategy emphasizes the need to buy more land closer to where most Michiganders live: The urban areas in the southern half of the Lower Peninsula.

The state took a step toward following through on that mission this month, when Whitmer announced plans to use $26.2 million in federal stimulus dollars to transform the former Chevy Commons site in Flint into a state park, ending Genesee County’s run as the only Michigan county with no state-managed public land.

Money would come from a total of $400 million in stimulus dollars Whitmer has proposed spending on state and local parks. The proposal must clear the Republican-controlled legislature to become a reality.

But the state also has a vested interest in maintaining access in the U.P., where outdoor recreation-based tourism is exploding. Keweenaw County, in particular, has gained a national reputation for its world-class mountain biking, extensive off-road vehicle trail system, and scenic terrain.

Fragmentation of that terrain, locals fear, would hobble the tourism economy and squander an opportunity to conserve land that could otherwise serve as a carbon sink and biodiversity haven to help combat and withstand climate change.

Nicholas noted that the Biden administration has committed to protecting 30 percent of U.S. lands and ocean territories by 2030.

“Well here we are,” she said. By buying all of TRG’s landholdings in Keweenaw county, “you could come in and you could protect 150,000 acres in one big move.”

At 11,000 acres and change, Keweenaw County’s current state-owned land mass is small for the U.P. (Marquette County has more than 263,000 acres) but much larger than some southern Michigan counties. Calhoun, for instance, has just 134 state-owned acres.

Whitcomb said a solution that involves other agencies or nonprofits is the likeliest hope to preserve the Keweenaw lands.

Previous experience in the U.P. provides a possible model.

In the early 2000, the Kamehameha Schools Trust of Hawaii sought to sell its vast landholdings in the U.P. Fearing fragmentation and lost public access, the Nature Conservancy and the state of Michigan worked out an agreement with the buyer to preserve access and constrain development on more than 271,000 acres spanning eight U.P. counties.

Most of the land remained privately-owned, while The Nature Conservancy bought 23,338 acres now known as the Two Hearted River Forest Reserve. 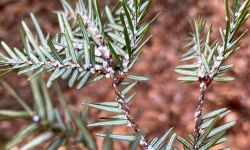