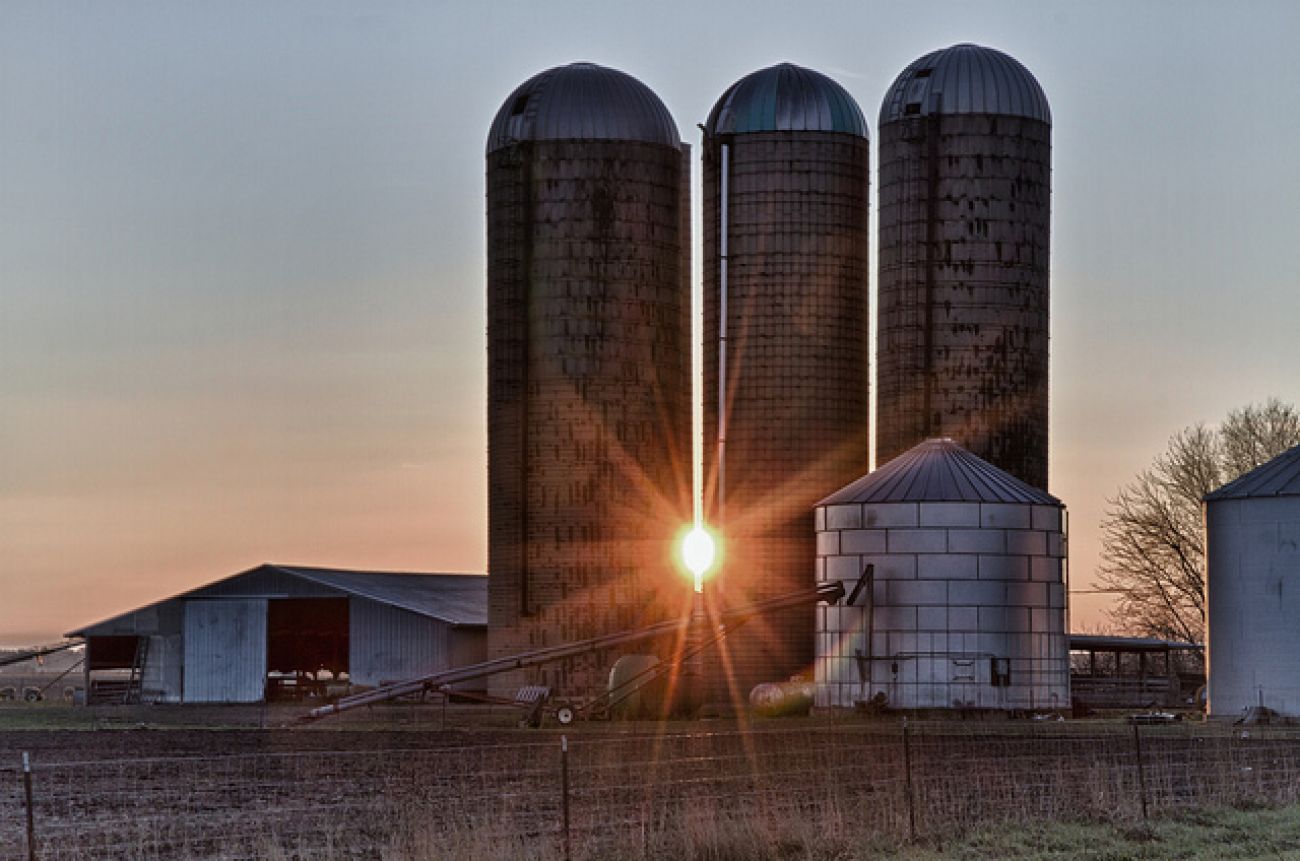 LANSING — One of Michigan’s wettest planting seasons in history forced Doug Darling to leave about two-thirds of his Monroe County farmland unplanted. And the corn, soybeans and wheat he managed to plant in between downpours? He doesn’t expect any of it to grow up normally. The soil moisture wasn’t quite right.

The ripple effects will extend far beyond Darling’s 186-year-old family farm — and they’ll linger for who knows how long in the local economy. With less work in the field, he’s not purchasing parts for his combine or other machinery. He’s not calling for service. He’s maxed out his storage of unused fertilizer (and he’s paying to store more unused supply in Toledo) — meaning he won’t need to contract with local dealers next year. The same goes for the insecticides he typically sprays.

“The economic impact of this is going to be far-reaching and it’s going to last for years,” Darling, who also serves on the Michigan Farm Bureau’s board of directors, told state lawmakers Tuesday at the Michigan State University Pavilion for Agriculture and Livestock Education.

The sixth-generation farmer was among a chorus of industry representatives, academics and government officials to describe widespread hardship and uncertainty in Michigan farm country after record rains and flooding coincided with chaos in agricultural markets that has escalated during President Donald Trump’s trade war with China. 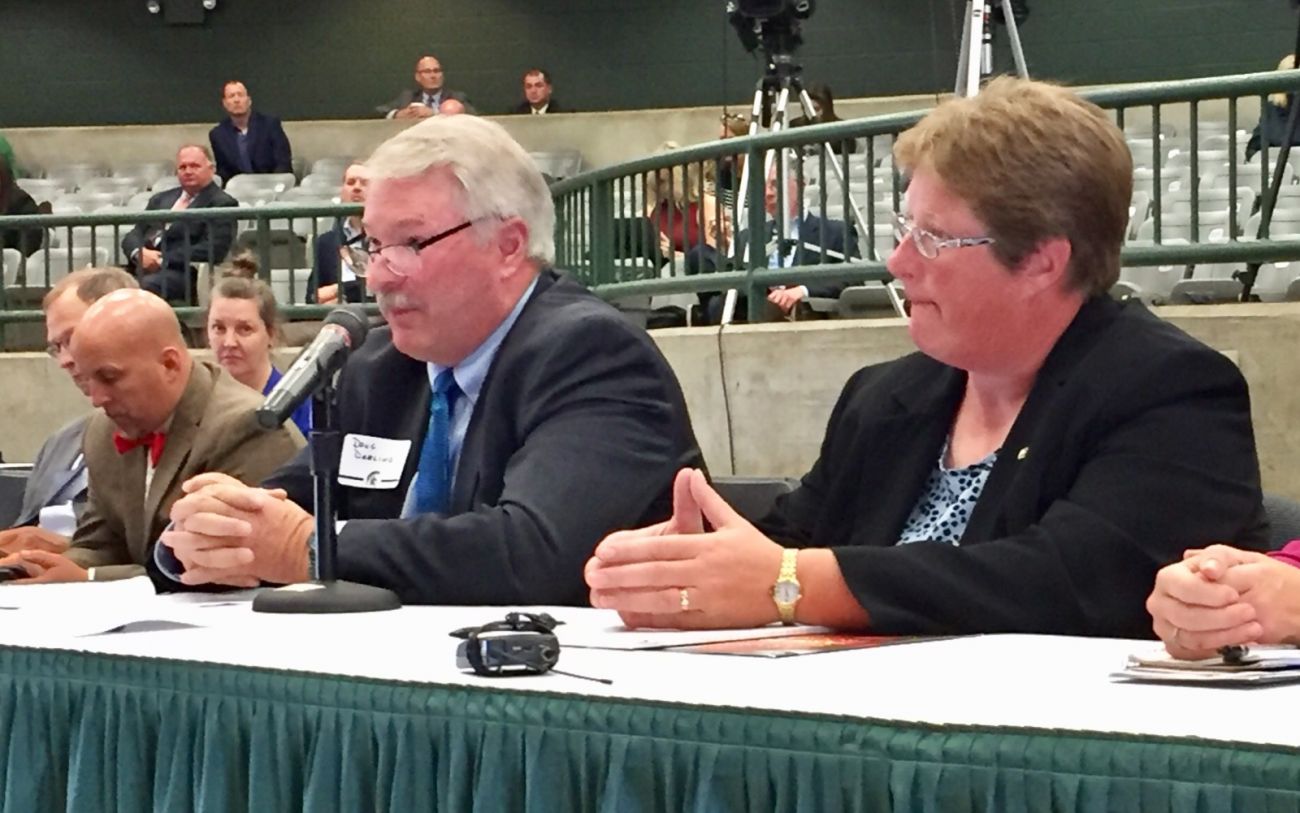 Alexander said she organized the hearing not only to get an update on conditions across Michigan’s 48,000-plus farms, but also to publicize a wide range of federal and state aid programs available to reeling Michigan farmers.

The meeting comes as federal and state officials are trying to respond to the emergency.

Sixty-four of Michigan’s 83 counties have asked the U.S. Department of Agriculture for an emergency designation and Gov. Gretchen Whitmer in June implored U.S. Agriculture Secretary Sonny Perdue to help the state’s farmers.

That came after Perdue relaxed rules to allow farmers to sell crops raised on land on which farmers filed insurance claims. Whitmer hailed that decision as she also announced the state had approved $15 million to help farmers, growers, processors, and farm-related retailers secure low-interest loans.

The escalating stress on farmers has come from more than just weather: Trade wars have upended grain, corn and soybean markets.

(“The U.S. position as a reliable supplier of ag products has been damaged, likely irreparably,” said Tim Boring, vice president of the Michigan Agri-Business Association.) Meanwhile, southwest Michigan fruit farmers are still smarting from a crop-killing polar vortex. Cherry growers along Lake Michigan face cheap imports from Turkey — including one fourth-generation farmer in Grand Traverse County that has been selling off his land this summer amid rock-bottom cherry prices. Dairy farmers, meanwhile are struggling due to years of low milk prices.

But much of Tuesday’s hearing focused on the fallout from what Michigan officials call the third-wettest planting season in history.

The word “crisis” echoed throughout the hearing.

“This state of crisis has been created by extraordinary weather conditions,” Gary McDowell, director of the Michigan Department of Agricultural and Rural Development, told lawmakers. “The impact of these unfortunate events have yet to fully materialize, and they have the potential to impact everyone in Michigan.”

Michigan farmers are among those across the region grappling with historic challenges after wet conditions pushed May planting into June and even July. Farmers nationwide couldn’t plant crops on more than 19.4 million acres, according to a USDA’s Farm Service Agency report released Monday. That’s the most since the agency started tracking those figures in 2007 — and the Midwest has seen the vast majority of those unplanted acres.

Michigan’s 870,000 unplanted acres was the eighth most in the United States, according to the federal data.

In many cases, crops that went into the ground won’t reach maturity, said Boring of the Michigan Agri-Business Association. Farmers late start in planting means harvests will likely stretch into winter, and concerns about crop size and availability will likely last through harvest of 2020.

More information about state aid for farmers can be found here.

Information about federal aid for farmers can be found here.

Beyond pushing farmers into the red, that means corn-dependant ethanol plants may need to temporarily shut down, and livestock farmers may have trouble finding feed for their animals, Boring said. Importing corn would be expensive because neighboring states are facing similar and even worse corn crop conditions.

Stephanie Schafer, a sixth-generation Clinton County dairy farmer, is among those wondering how she’ll feed her 300 cows.  She’s cut feed costs amid a five-year tumble in milk prices, but she’s not sure how she’ll continue to operate if corn prices skyrocket amid a shortage.

“Where’s the corn going to come from?” she asked lawmakers Tuesday. “This has a long tail to it. Because I’m going to be sitting here next year saying, ‘yeah, my corn silage stinks.’ At least I hope I’m sitting here.”

Dave Armstrong, president and CEO of Greenstone Farm Credit Services, which underwrites 30 percent of the state’s dairy protection policies, offered the rare shred of positive news: Of his firm’s 11,600 full-time farm customers, just 22 are currently in bankruptcy or foreclosure as others have found ways to cut costs and weather the ups and downs of a cyclical industry.

“This isn’t our first rodeo with tough times...[Many farmers] cut their teeth in the 1980s,” he said, referencing that era’s farm crisis.

“He’s talking about right now,” she told Bridge Magazine, referencing Armstrong’s rosy figures. “We don’t know what crops will look like in the coming months and years.”