Michigan landfills are a small source for PFAS in waterways, study says

Editor’s note: A previous version of this story compared levels of PFAS found in landfill leachate to a federal health advisory level for exposure to the compounds in drinking water. That reference been removed because residents would not be directly exposed to PFAS in leachate, and there is no specific federal standard for PFAS in landfill leachate.

The report from the The Michigan Waste and Recycling Association underscores the prevalence of the hazardous chemicals used in everyday products and their danger to waters. But its authors caution that most PFAS  in lakes and rivers likely comes from other industrial sources.

Here’s what happens: Waste is sent to landfills, which produce leachate –  a mix of water and other substances – that are then sent to wastewater treatment plants. Those facilities filter out many toxins, but not always PFAS, which is in water when it’s discharged into lakes and rivers.

The trade group commissioned the report of 35 of the state’s 45 landfills that accept municipal waste after the Department of Environmental Quality asked landfills and wastewater treatment plants to study the problem, as Michigan confronts a surge of water contamination crises from PFAS chemicals.

The landfills found relatively high levels of PFAS in leachate.

When released into waterways, the chemicals can accumulate in fish and might harm folks who eat those fish, state regulators say.

But the report also suggested landfills man contribute just a small portion of the PFAS released into waterways, suggesting that wastewater from other industrial sources likely plays a larger role.

The conclusion came after data from landfills was matched with overall discharges from wastewater plants.

Experts cautioned the report offered just one snapshot in time and more testing is needed.

PFAS, shorthand for per- and polyfluoroalkyl substances, are a group of chemicals used to manufacture everything from Teflon and Scotchguard to firefighting foam, have been linked to low birth weights, immune system troubles, thyroid problems and cancer.

They are called “forever chemicals,” because they break down slowly in the environment. State regulators thus far have largely focused on two types of “long-chain” PFAS compounds — PFOA and PFOS — that linger longer in the people’s bodies.

The waste association focused on those two chemicals.

The 35 statewide landfills collectively sent about 1 million gallons of leachate to wastewater treatment plants, with concentrations of about 0.01 pounds of PFOA and 0.003 pounds of PFOS, the study found.

Meanwhile, 34 wastewater plants examined received about 1.4 billion gallon of waste “influent” from all sorts of sources each day. That included about 0.09 pounds of PFOA and 0.15 pounds of PFOS.

Where else do the chemicals come from? Everywhere else that has a sewer connection — including heavy industry such as plating business that manufacture chrome auto parts, said Rick Burns, senior vice president with the NTH Consultants, an engineering firm that crunched the numbers for the waste association. 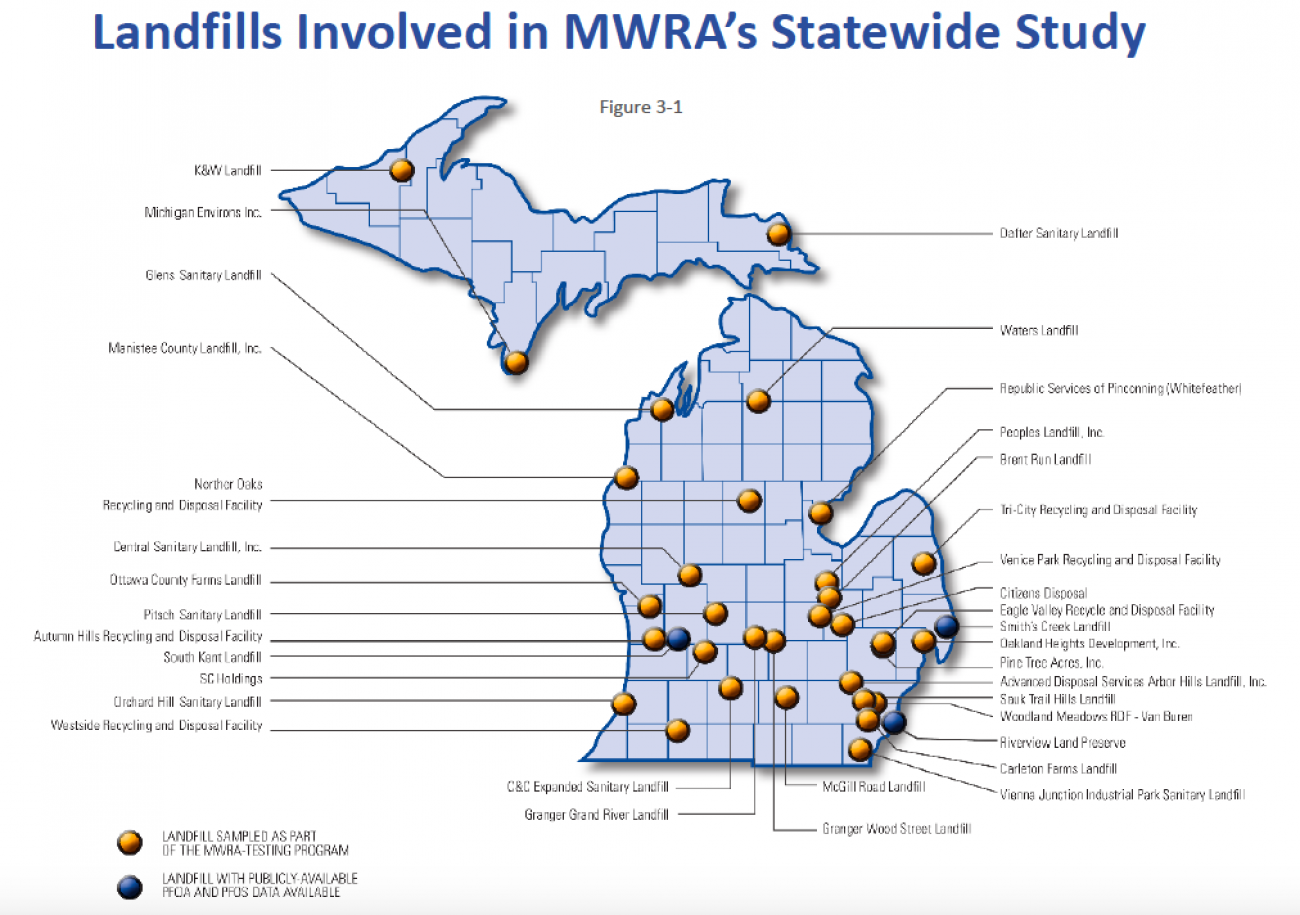 PFAS is typically measured in parts per trillion (ppt).  Michigan has no formal drinking water standard for the chemicals. For now, state regulators general defer to EPA’s lifetime health advisory of 70 ppt for combined PFOS and PFOA, which a growing body of research suggests should be tightened.

Waste association officials said they weren’t surprised PFAS compounds were so prevalent in leachate, because the chemicals have for decades been used in non-stick and water-resistant products that are common around households and in industry.

But they were pleased at early indications that landfills may not be the biggest contributors PFAS and PFOA in wastewater.

“We’re on the front end of this problem. We’ve got data now. We’re working toward a solution, but we’re not sure what the solution is,” Steve Essling, the group’s chairman for technical standards, told Bridge.

Scott Dean, a spokesman for the Michigan Department of Environmental Quality, said the findings roughly tracked with what the agency had found in its own investigations at landfills, though the data was limited.

“Whether leachate only represents a minor contribution is really dependent on the amount of leachate discharged and the flows at the receiving wastewater treatment plant,” he said in an email. “There are instances where landfill leachate is the primary source of PFAS within wastewater collection systems and those impacts need to be addressed.”

Nick Occhipinti, government affairs director for the Michigan League of Conservation Voters, a Lansing-based environmental advocacy group, said the report could inform debate about fixes going forward, and he applauded the waste group for reporting it.

“It really tells me how important it is to attack this head-on and break this cycle.”

The high levels of PFAS found in leachate should draw attention to conditions at shuttered landfills — those that may have accepted even more toxic products and weren’t engineered with linings that prevent the contaminants from leaching directly into groundwater, Occhipinti said.