The push to oust Michigan GOP executive director Jason Roe highlights internal divisions in a party gearing up to take on Gov. Gretchen Whitmer and other Democrats in the 2022 mid-term election, even as Trump continues to falsely claim the 2020 contest was “rigged.”

“We’re not necessarily saying that Trump — the man — is the future of the party, because we don’t know what’s going to happen,” said Debra Ell, a Frankenmuth organizer leading the push to censure and remove Roe from the state party.

“But the MAGA movement, which propelled Michigan to turning red for the first time since Reagan in 2016, that’s what we don’t want to lose,” she said. “We believe that’s the future of the party. Not some guy who believes that it’s Trump’s fault we lost the election and it wasn’t stolen.”

Ell’s proposed resolution cites comments Roe made in a Politico article published in late November. The article was published as Trump has his allies pushed unsubstantiated fraud claims that jeopardized certification of Michigan’s election and propelled GOP activists to rush the Capitol in an attempt to block the Electoral College vote count.

“The unfortunate reality within the party today is that Trump retains a hold that is forcing party leaders to continue down the path of executing his fantasy of overturning the outcome—at their own expense,” Roe said in an interview with journalist Tim Alberta.

“Frankly, continuing to humor him merely excuses his role in this. The election wasn’t stolen, he blew it.”

“That is going to take every Republican working together,” Goodman told Bridge Michigan.

Roe, who did not immediately respond to a voicemail seeking comment on this story, was hired by Michigan Republican Party Chair Ron Weiser earlier this year.

The veteran GOP strategist is a Lansing native who has worked for politicians and candidates across the country, including in 2016 as a national spokesperson for Sen. Marco Rubio’s presidential campaign.

Roe told Politico that “once-conservative heroes” like former Michigan Congressman Justin Amash no longer found a home for themselves in the party because they did not “demonstrate continued fealty” to Trump.

Roe is now helping run a state party that is planning a potential petition drive to tighten voting laws ahead the 2022 election.

But Roe was not elected, and GOP delegates deserve to know more about an official who was hired to guide their party through upcoming elections, said Ell, who ran a “voter information center” last year in Saginaw and served as a Trump delegate to the 2016 Republican National Convention.

“He's in the category of the never-Trump or Lincoln Project guys in my mind,” Ell told Bridge Michigan, referencing Republicans who actively worked against Trump’s re-election.

Ell said Monday she was emailing a list of roughly 3,000 Michigan GOP precinct delegates and asking them to sign on to her draft censure resolution, which urges them to declare that “those who publicly spoke out against election fraud by the Democrats and blaming our Republican president for the loss are TRAITORS to our Party and have no place within our leadership.”

About 50 delegates had already signed an initial Facebook post, she said, telling Bridge Michigan that state party officials refused to provide her with a full email list of precinct delegates, who are elected by local voters across the state.

Initial signers included Curtis Clark, an Allegan County precinct delegate and founder of “Patriot Approved,” a new group seeking to vet political candidates and expose “RINOs” who it thinks are “Republicans in name only.”

Ell’s is the latest in a series of censure attempts within the Michigan Republican Party following the state’s 2020 election, which Democratic President Joe Biden won by 154,188 votes, a three percentage point margin confirmed by multiple audits and a hand recount of ballots in Antrim County.

The Roe censure push is “on the same wavelength” as Upton and Meijer resolutions approved by county parties, Ell said. “They are under the Republican banner, but their heart is not the future of the Republican Party.”

Speaking to the North Oakland Republican Club last month, Roe urged party unity and said the Michigan GOP is “not going to win by picking each other off.”

“Deviations from conservative orthodoxy, love for Donald Trump or any other measurement that we’re going to (use to) assess each other doesn’t matter as much as getting on the same page and going after the socialists that are trying to destroy the country,” he told fellow Republicans. 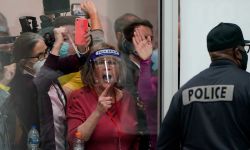