That’s when Jim Collins, director of the communicable disease division in the Department of Health and Human Services, informed colleagues the state had confirmed its first two cases of COVID-19, the disease caused by the coronavirus.

“Michigan has joined the ranks of all of the other great lake states,” Collins wrote in an internal email obtained by Bridge Magazine through a Freedom of Information Act request.

So began a public health crisis that has become a defining moment for the first-term Democrat who ran on a pledge to “fix the damn roads” but struggled to do so during her first year of office.

Like most residents, Whitmer rarely leaves home these days, practicing the social distancing she preaches while coordinating Michigan’s response to the pandemic from the state-owned governor’s residence in Lansing’s historic Moores River Drive neighborhood. 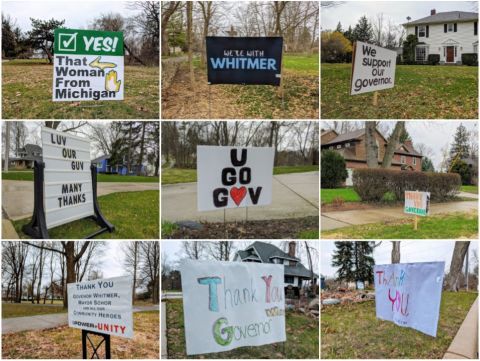 But outside the neighborhood, public reviews of Whitmer’s performance as governor are more mixed. Opposition to her strict stay-home order prompted a conservative revolt and protests in downtown Lansing on Wednesday, while she’s become a rising Democratic star nationally, trading barbs on Twitter with President Donald Trump and generating vice-presidential buzz.

Michigan had spent weeks planning for the pandemic, internal documents show, but Whitmer acknowledges the state — like the nation — was not fully prepared for a public health crisis with little precedent.

In a little more than a month, 28,000 state residents have been infected by the virus and 1,921 have died, as of Wednesday morning.

“If I could go back in time, would I have started stockpiling N-95 masks? Absolutely,” Whitmer said Tuesday, telling Bridge she wants to learn from experience to improve state systems, planning and communication.

“Every leader who’s confronted this, if they were being honest and they had a time machine, we would have all started building up resources on [personal protection equipment] in particular.”

Like most states, Michigan maintained only a small cache of medical supplies — 5,120 N-95 masks, 500 face shields and 100 ventilators, for instance — but built emergency response plans that assumed shipments from the federal government’s Strategic National Stockpile.

And when initial shipments failed to meet demand, governors turned to the private market for alternatives, often bidding against each other or the federal government for crucial supplies.

“We haven’t had a coordinated national response, and the messaging has been inconsistent,” Whitmer said. “Both of those things have undermined our ability to save lives.”

But as Whitmer and her team begin to develop plans to reopen the economy, she is resisting growing calls from Republican legislators to put certain sectors back to work immediately for fear of a second wave.

“We are starting to see the curve flattened, and we know that we saved lives,” Whitmer said. “The hard part is, if we’re successful, people will never fully appreciate how many lives we saved. That’s OK. That’s a part of being successful when you’re talking about public health.”

Whitmer and her two teenage daughters responded to their neighbors’ show of unity by making signs of their own thanking those still at work including doctors, nurses, scientists, first responders, delivery drivers, grocery store workers and “everyone who is staying home.”

“These are hard times,” Whitmer said Tuesday. “I think sources of inspiration like that are really important in this moment.”

As of late March, polling conducted by a Republican firm, Marketing Resource Group, suggested Whitmer’s job approval ratings were surging: 60 percent of voters surveyed gave her high marks, up from 42 percent in October.

But Republican frustrations exploded into public view last week when the governor tightened her stay-at-home order through April 30, disregarding calls to reopen sectors where employees could maintain social distancing and imposing stricter rules than most other states.

Some confused retailers stopped selling child car seats, bug spray and plant seeds, which Whitmer insists she never intended to ban and can still be purchased in stores or online 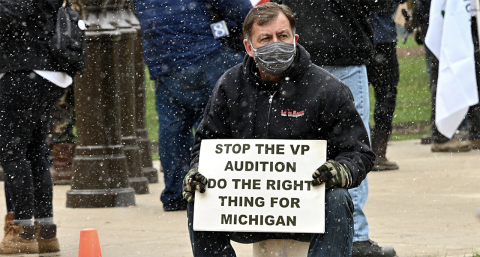 “I think most people agree that a stay-at-home order is appropriate, but the implementation of it has not been very smooth,” he said.

Whitmer starts her days at 5 a.m., enjoying quiet time with coffee and “all the news” before her daughters or husband are awake.

Her official work day begins at 8 a.m. with a staff conference call, and wraps up 12 hours later with another team call at 8 p.m.

“And usually every minute between those two is full” of conference calls and check-ins, Whitmer said, noting she only occasionally breaks to take her dog, Kevin, for a walk. “My husband is doing most of that these days.”

Whitmer has found time for media interviews — lots of them.

Her public calendar included 21 time slots for media interviews in the final 21 days of March, along with 13 slots for legislator calls, six slots for director-level calls and five separate White House briefings.

Whitmer is a national co-chair for presumptive Democratic nominee Joe Biden’s campaign, and her ascension as a potential running mate has made her a target of GOP leaders. On Tuesday, Republican National Committee Chair Ronna McDaniel called on Whitmer to “stop auditioning for VP & do your job!”

Trump Victory, the joint RNC and presidential campaign committee, has ramped up attacks in recent days. Whitmer’s is “bungling Michigan’s war on COVID-19 by imposing authoritarian rule over Michiganders,” the group said Monday.

McDaniel, who lives in Michigan and previously led the state GOP, argued Whitmer’s time on TV would have been better spent on the ground, noting the governor had criticized Trump before requesting a major disaster declaration from his administration.

Trump, in turn, has bashed Whitmer, referring to her infamously as “that woman from Michigan,” a phrase later immortalized on T-shirts including one the governor wore on a late-night comedy show. 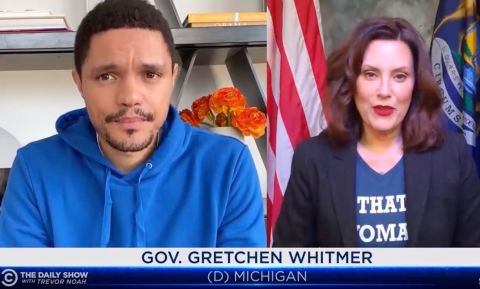 “The fact of the matter is, if I wasn’t taking every opportunity to ask for help, I wouldn’t be doing my job,” she said. “Every time I go on national news, I educate more people about what is happening and why COVID-19 is so dangerous and why we’ve got to stay home — and I get offers of help for the state of Michigan.”

Decisions based on science

“We’re reminded every single day — hold on, I’m going to let my dog out — that we’ve got to make decisions based on where the science leads us,” Whitmer told Bridge during a phone call.

Documents obtained by Bridge through a public records request show the state health department had spent the better part of two months preparing for the pandemic.

Staff had worked “night and weekends for more than six weeks” before the state’s first confirmed case, according to a March 10 email from Sarah Lyon-Callo, director of the bureau of epidemiology and population health.

Still, critics have raised questions over how prepared the state was to implement those plans, handle the surge in unemployment claims that has resulted in 1 million claims (1 in 4 state workers) and provide real-time data on such things as available intensive care beds demanded by health officials and the general public.

Some health experts also have questioned whether Whitmer waited too long to halt public gatherings, allowing the virus to gain steam.

Whitmer has been a “calm and steady” voice amid the crisis but could have done more early on to message directly to African-American residents who have been disproportionately impacted by COVID-19, said Detroit political and public relations consultant Greg Bowens.

Detroit has emerged as a national hotspot for the infectious disease, which has spread to high-ranking city officials in law enforcement and state government.  Statewide, about 40 percent of COVID-19 deaths have been African Americans.

“To me, that’s strong evidence of how we failed collectively to get to the black community,” said Bowens, a Democratic Party activist.

Former administration officials who spoke with Bridge — Republicans and Democrats alike — were generally complimentary of Whitmer’s initial response to the pandemic.

“Like all governors, she’s had to struggle with the lack of equipment, the lack of testing, the lack of coordinated response, and she’s done a pretty good job given the circumstances she’s facing,” said Bill Rustem, an adviser to Republican former Govs. William Milliken and Rick Snyder.

But how and when the governor decides to reopen the economy “is going to be crucial and probably the biggest part of what she’s remembered for,” said Truscott, the former Engler aide.

Dennis Muchmore, another former Snyder adviser, said he thinks Whitmer has been “decisive” but benefited from Ohio Gov. Mike DeWine taking similar steps a day or so before her in mid-March, which prepared the Michigan public for business closures and limits on public gatherings.

“I don’t like the last executive order much,” Muchmore said of Whitmer’s expanded stay-at-home order, “but I’ve been in the middle of these things. You know a lot of stuff that nobody else knows.”

Still, Muchmore questioned why civil libertarians have not raised more concerns about the governor’s sweeping use of emergency authority to limit basic rights.

“I don’t want to hear anybody bitch about emergency managers any more,” he said, referencing the controversial law that Snyder used to take over finances of cities including Flint and Detroit.

One year ago, Whitmer was lobbying the GOP-led Legislature to approve a 45-cent gas tax increase her own party eventually abandoned. That sparked a months-long budget battle and a near government shutdown she only averted by a record-breaking veto spree that strained relationships.

But her star has risen during her second year in office, first as the Democratic choice to respond to Trump’s State of the Union Address, and now as a national figure in the global pandemic. 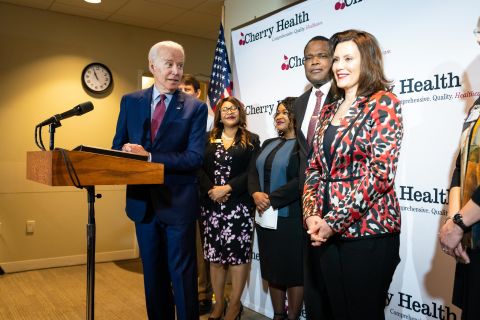 “It has been an amazing transformation from the kind of profile she had last year, which I think was basically a disappointment to a lot of Democrats in terms of her actual accomplishments,” said Matt Grossmann, director of the Institute for Public Policy and Social Research at Michigan State University.

“We’ve kind of forgotten about the initial agenda.”

Appearing on national TV gives Whitmer a large platform to highlight her state while also shaping the conversation around the crisis, Truscott said. And if she can withstand Trump’s jabs, it’s probably good to get his attention, he suggested.

Trump “sees the numbers, so he knows what’s going on, and he also is one to react to what he sees in the media,” Truscott said. “And I think from that standpoint, it probably got us to the front of the line in terms of receiving federal help.”

“She is doing a good job under a real crisis, which is a good test of if somebody’ qualified for the job,” Blanchard said, noting Whitmer’s record might otherwise be thin after running the state for less than two years.

“And I think she has good rapport with Biden, which is really important.”

Blanchard knows something about how to manage a financial crisis and make difficult decisions. When he took office in 1983, the state had a 17 percent unemployment rate and a budget hole so deep it had taken out loans from Japanese banks, he said.

Whitmer has done a “great job, but having said that, when you propose and enact harsh remedies, some people are not going to be happy,” Blanchard said. “The longer this goes, the harder it’s going to be.”

Whitmer, for her part, said she’d still rather be working on fixing those roads.  But that feels “like a distant memory now,” she acknowledged.

“As a mom, I want to be planning my daughter’s high school graduation,” she said. “That’s a milestone that we’re not going to be able to do. We’re all struggling, but we’re tough, and we’re smart, and if we stay united we’re going to get through this better. We’re going to see the horizon.” 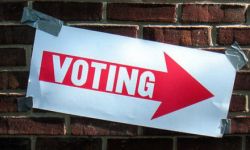 May 12, 2021 | Jonathan Oosting in
Michigan Government

May 12, 2021 | Sergio Martínez-Beltrán in
Michigan Government