Ohio gave away millions of at-home COVID tests. Michigan, not so much.

Experts say at-home tests can help reign in the spread of COVID, but a rush on holiday demand amid omicron fears has made them tough to find. (Shutterstock)
December 22, 2021
Robin Erb (Email)
Michigan Health Watch
Coronavirus Michigan

Michigan Health Watch
Ohio gave away millions of at-home COVID tests. Michigan, not so much.

Jan. 4, 2022: Can at-home COVID tests be trusted with omicron? There are limits.
Jan. 3, 2022:  ‘It’s not letting up’: Omicron fuels surge of Michigan hospitalizations

They were packaged and ready-for-the-taking: no questions asked, no cost, and no waiting.

Two visitors strolled in, one behind the other. Librarians handed over the tests. A third person stepped into the foyer lit up by the afternoon sun. A bag had been left for him already — a contactless pick-up.

After watching for a few minutes, I approached the front desk, explaining that I was from Michigan. Is it okay to ask for a test in an Ohio library?

Sure, a librarian cheerily responded. They’re to keep everyone safe.

She slid four COVID tests across the desk.

While people across Michigan are finding it difficult to buy at-home COVID tests before the holidays, Ohio is giving away literally millions of tests — more than 4.8 million COVID tests distributed to the public so far this year, according to the Ohio Department of Public Health. The tests are readily available at libraries, schools, universities and community and recreation centers.

The Toledo-Lucas County Health Department branch distributed 20,000 tests in six hours on Thursday at a local rec center and a union hall. The next day, the Sanger branch library in West Toledo, distributed more than 1,000 kits as part of a program between the Ohio Library Council and the state health department — a sliver of the more than two million tests distributed since March at more than 160 libraries.

“The Department of Health and the governor's testing team actually came to us and said they had purchased a significant amount of these testing kits,” the library council’s executive director, Michelle Francis, told Bridge. “They wanted to make sure they knew the testing would continue to be a part of their strategy to address COVID.”

Last week, a library in Mentor, Ohio, received 1,100 tests that Wednesday afternoon. They were gone within hours, with vehicles “wrapped around the building to the point that the neighbors were getting upset,” Francis said.

Other states also have taken aggressive measures to get free tests in the hands of residents.

In Michigan, there is no such statewide program, even as the omicron variant fuels the rapid spread of COVID. Estimates have varied about the pace of its spread, but very preliminary research suggests it may be more than three times as transmissible as the delta variant.

At-home tests can help slow the spread, warning asymptomatic or mildly ill Michiganders that they are infected and should isolate from others — no work, errands, or social gatherings — to slow viral spread.

In the days before Christmas, Michiganders have had to purchase their own tests — often a cost of $10 or more per test — when they are available. Others have found empty shelves, a limit on test purchases, or online “out of stock” messages as consumers snap up tests before holiday gatherings. 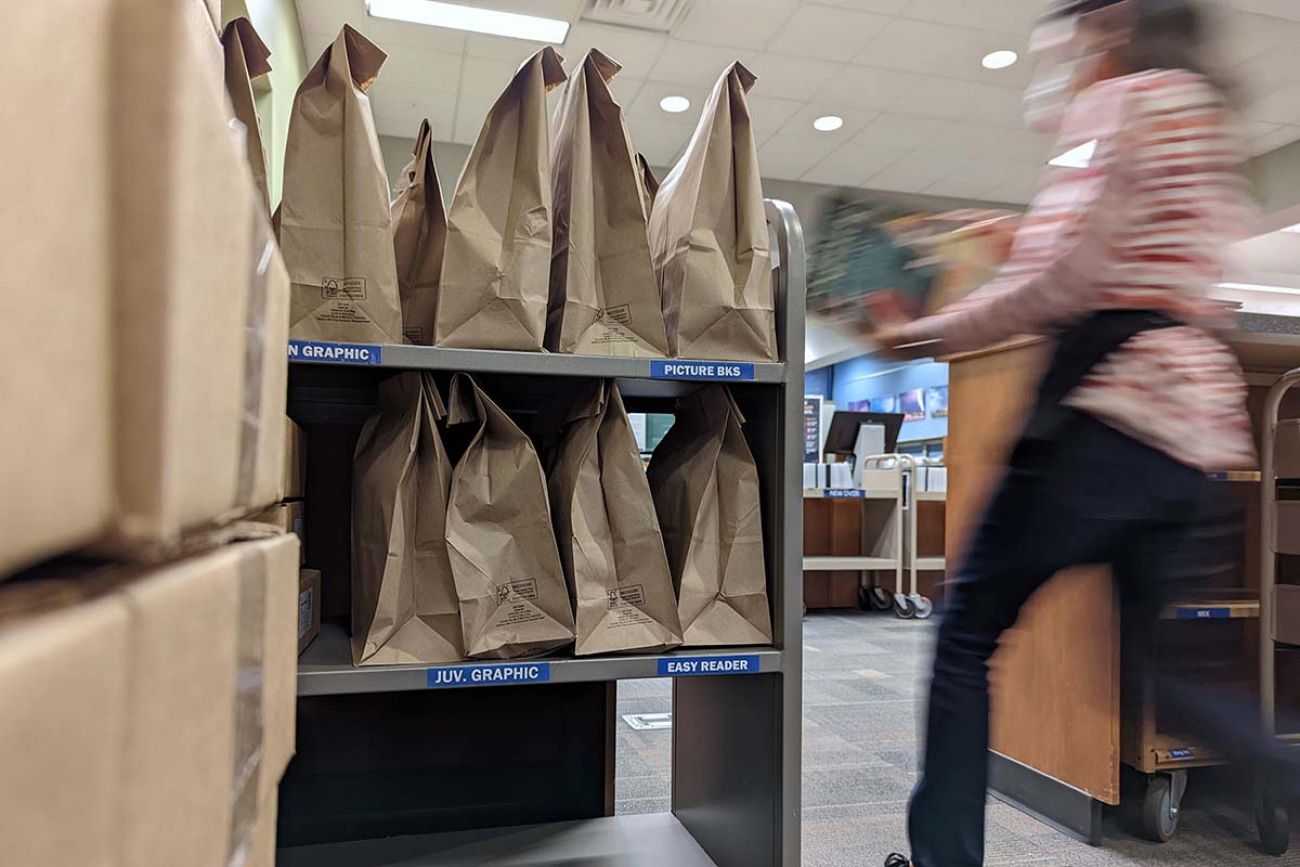 In Toledo last week, visitors simply walked up to a front desk at the Sanger branch library, and requested up to four free at-home tests stored on a rolling library cart normally used to sort and return books to shelves. (Bridge photo by Robin Erb)

In contrast to efforts in Ohio and some other states, the Michigan Department of Health and Human Services has focused free distribution of at-home tests more narrowly to reach school children and vulnerable populations, according to MDHHS spokesperson Lynn Sutfin.

In mid-November, Michigan distributed 120,000 federally funded at-home tests to schools for students, teachers and staff as part of a pilot at a handful of school districts through the MI Backpack program. The test kits, each with two tests, are limited to one per person.

Sutfin said the state also “recently explored distribution” of over-the-counter tests through local Community Action Agencies in areas of “underserved populations.” However, fewer than 600 tests had been distributed that way so far, she said Monday.

“We have (a) limited number of over-the-counter tests and need to prioritize where tests are distributed,” Sutfin said in an email. “One of our primary goals has been to keep K-12 students safe and classrooms open. So a majority of our supply of OTC tests go to school aged children and their families.”

In addition to a focus on schools, Michigan has distributed millions of antigen tests to be administered within prisons and long-term care facilities, she noted.

“We will continue to expand our testing strategy in the state to ensure Michiganders can get a test, when and where they need it,” Sutfin wrote.

The Washtenaw County Health Department distributed 20,000 tests to Ann Arbor and other residents this summer through a research program with the National Institutes of Health and the Centers for Disease Control and Prevention. But COVID cases at the time had slumped and residents’ interest was lackluster, said Susan Ringler-Cerniglia, the health department spokesperson.

With the uptick in cases this fall, the department began considering purchasing more tests, but by the time it identified funds to purchase 8,500 two-test kits, the department couldn’t find enough supply, Ringler-Cerniglia said.

And the slump in demand? No more.

“We get inquiries now ‘Why aren’t you doing this anymore?’ ‘When will you do it again?’” she said. “I wish we could.”

Newly confirmed coronavirus cases have dropped in recent days in Michigan, but they — as well as statewide test positivity rates — remain high, underscoring the high level of community transmission. Several hospital leaders Tuesday said they worried that Christmas gatherings will drive those numbers higher into the new year.

The Henry Ford Health System logged a 21 percent jump in patients aged 21 to 35 years old who tested positive this week — from 338 last week to 428 people. That’s a demographic that is less likely than older Michiganders to be vaccinated and also less likely to avoid holiday gatherings, according to Bob Riney, the health system’s president of healthcare operations and chief operating officer.

“We are bracing for a spike in infections and hospitalizations, which has the potential to be our largest surge yet,” he said of omicron.

Ideally, Michiganders should have extra at-home tests on hand as a way to fight COVID’s spread, both during and outside of the holidays, said Dr. Christopher Ledtke, an infectious diseases expert at Traverse City-based Munson Healthcare. He suggests an extra test per person.

Other countries have offered free at-home tests kits for some time, including the U.K. Germany provides them by vending machines, too. Same with Japan and Hong Kong.

“We should be doing more testing than we're doing,” Ledtke said. But “access to tests and turnaround time and supply” all have been “limiting” factors, he said.

Millions of free at-home tests are expected to head to Michigan next month under a federal effort announced Tuesday to limit the omicron-fueled wildfire spread of COVID.

The Michigan distribution, announced by President Biden Tuesday, will be among 500 million tests that will be passed out free of charge nation-wide.

The federal influx of COVID tests will be made available to anyone who wants them, but details of how to request them or whether there will be a limit are still being worked out, according to the White House. Biden also said the Federal Emergency Management Agency will send “hundreds more vaccinators” throughout the hardest hit areas of the country to pop up vaccination clinics, adding yet another layer against an especially contagious omicron variant.

The Biden announcement is “a step in the right direction, but it's not everything we need at this point,” said Ledtke of Munson.

Biden also announced a partnership with Google to give Americans easier-to-search information about testing sites near them.

“The bottom line is a lot better than it was and we're taking more steps to make it easy to get tested, get tested for free,” Biden said.