Sometimes, Kyle Kast daydreams about what life would be like without $65,000 in student loans.

Maybe the Lansing resident, who has bachelor’s and master’s degrees, would go back to teaching, a job he loved but that he left for a higher-paying private sector career because of his $500 monthly loan payments.

He’d make that trip to Ireland he’s thought about for years but can’t afford. Recently, his passport expired. He doesn’t see a reason to pay to renew it.

And he could funnel the cash he now spends on student loan payments to build up a retirement fund. At age 33, he said, he’s “way behind.”

The rising cost of college affects the ability of Michigan residents to enroll as freshmen, and hobbles grads with debt that can take decades to pay off.

With just a month before the March 10 Michigan presidential primary, Kast, who attended Michigan State, Arizona State and Northern Arizona universities, is among Michigan residents sizing up Democratic candidates’ plans for shaving the cost of higher education.

Bernie Sanders and Elizabeth Warren have proposed plans that would eliminate some or all student loan debt, and make attendance at public universities free. Other Democratic candidates offer more modest plans, from easing costs at one- and two-year higher education programs to forgiving student loans based on income or public service, but all include plans to address rising college costs. You can read about those plans here.

Michigan ranks 21st in the nation in high school graduation rates, but just 33rd in the percentage of adults with a bachelor’s degree; 51 percent of the state’s adults have an associate’s degree or higher, compared to 54 percent nationally.

That matters because income typically rises with education levels. On average nationally, people with a bachelor’s degree earn $900,000 more over their lifetimes than people with a high school diploma.

Michigan students from middle- and high-income backgrounds attend and graduate from college at rates similar to those across the nation, but its low-income students enroll at lower rates.

Gov. Gretchen Whitmer has said getting more high school grads onto campus or into job training certification programs is key to improving the state’s economy. Whitmer has set a goal of having 60 percent of Michigan adults with a certification or college degree by 2030.

“When you talk to families about barriers to going to college, affordability is almost always one of the first things mentioned,” said Ryan Fewins-Bliss, executive director of Michigan College Access Network, which advocates for increasing college and job training enrollment.

Removing cost from the calculation from decisions about whether to attend college “is a great opportunity” to increase college enrollment, Fewins-Bliss said.

Several efforts in Michigan are already edging toward free college for some families, but don’t go as far as Sanders’ and Warren's plans.

Two years ago, U-M launched the Go Blue Guarantee financial aid program offering free tuition to Michigan residents with family incomes under $65,000, which includes roughly half of state households. The result: The percent of applicants and enrollees from low-income families is inching up at a school that has traditionally had trouble attracting poor students.

This fall, Wayne State University followed suit. And recently, Whitmer proposed Reconnect, a program that would make job training and some college free to many Michigan residents over the age of 25.

Democratic presidential candidate proposals range from making college free for all students at public universities through federal grants, to support for the use of state and federal grants to cover one- and two-year programs for associate’s degrees, certifications and job credentials. You can read the candidates’ plans here.

In all, eliminating tuition for all students at all public colleges and universities nationwide would cost at least $79 billion per year, according to data analyzed last year by The New York Times.  The federal government already spends some $91 billion on policies that subsidize attendance, such as aid to veterans, according to the same analysis.

Donald Heller, former dean of the School of Education at Michigan State University and current provost at the University of San Francisco, is a critic of free college proposals, calling them “an inefficient and ineffective use of federal dollars because it does not provide enough financial support for the students who need assistance the most.”

Heller said “free college” sounds appealing, but in the end it subsidizes “the education of wealthy families” whose children would enroll in higher education institutions anyway.

That’s similar to the view of candidate Pete Buttigieg, who doesn’t favor universal free college, but supports providing tuition subsidies for families earning up to $150,000 and boosting the maximum Pell Grant by $1,000.

“Free tuition isn’t enough” for many low-income students, Heller said. “They often face $10,000 to $15,000 in additional costs, like housing and food.

The plan of current Democratic frontrunner Sanders calls for the federal government to pick up the tab for college, meaning there would be no impact on the state budget. Andrew Yang, in contrast, would have the federal government buy all the outstanding student debt, then forgive it if students repay 10 percent of their salary for 10 years.

Currently, universities can adjust tuition as costs change, Cantwell said. How would a federal free-tuition program adjust for different costs on different campuses as well as the state budget?

Michigan’s government subsidizes colleges, sending $1.5 billion in 2018 alone. But over the years, Michigan colleges have raised tuition as that state aid has failed to keep up with inflation. In 2015, tuition constituted 69 percent of college revenue in Michigan, the sixth-highest in the nation.

Cantwell added that universities would be concerned that a large influx of federal dollars would include more federal strings.

“Maybe there would be additional restrictions” on how money is spent, Cantwell said.

The plans of most candidates assume there would be a mandated state-funding match to access federal grants for free college, said Dan Hurley, CEO of the Michigan Association of State Universities, which advocates for the state’s 15 four-year public universities.

Similar state match policies could mean Michigan would strain to take advantage of the program, because the state has been stingier than most in its higher education funding, Hurley said.

“It has to be a partnership, and not just a federal giveaway,” Hurley said. “Otherwise it would be remarkably inefficient and expensive.”

In Michigan, the average college grad who took out loans now leaves campus with $35,000 in debt.

The total student loan debt in the country is now more than $1.4 trillion. In Michigan alone, it’s $47 billion.

Two candidates, Sanders and Warren, have proposed wiping out that debt for most students. Other candidates, including Joe Biden and Amy Klobuchar, have proposed easing repayment plans, tying student loan payments to income, or erasing some debt in exchange for public service.

Because the vast majority of loans are federal, the proposals wouldn’t have a direct impact on the state budget.

The proposals could offer a shot in the arm to the state economy, as residents reroute money formerly spent on student loans to other purchases, such as homes and cars.

“You’ve got an entire generation who are hemorrhaging a huge portion of their income and not contributing to the economy,” said Mark Rivett, an Ann Arbor resident with about $50,000 in student loan debt.

One study found that college grads with student debt were 36 percent less likely to consider buying a home.

“You do the math, and millions and billions of dollars are being taken out of the economy,” said Rivett, who attended the Art Institute of Pittsburgh and now works for the University of Michigan. “You’re forgiving debt in a way that allows people to contribute to the economy.”

Lansing resident and student loan holder Kast called the prospect of wiping out his $65,000 in loans “magical.”

So did Hurley of the Michigan Association of State Universities, but in a different sense. Hurley said he believes proposals to wipe out student debt are not realistic.

Nor is Hurley a fan of Whitmer’s more modest recent budget proposal to create a $10 million rotating fund to allow former college students to refinance their loans at lower rates. He said he believes it’s best to invest “on the front end, with financial aid for students, rather than on the back end.”

Added former MSU dean Heller, “You’ve got many students out there who are very successfully paying back their loans. Why should they get a free ride?”

Rivett sees it differently, arguing that if Wall Street got $700 billion in bailouts in the housing market crisis of 2008-09, college grads should be eligible for a government bailout, too.

A study late last year by Moody’s Investors Service concluded eliminating student debt nationwide would “contribute to a modest increase in household consumption and investment,” but increase the likelihood of future borrowers running up big debts in hopes they would be forgiven.

MSU’s Cantwell agreed that student loan forgiveness “is no different from other one-time stimulus policies.

”It certainly would help lots and lots of people,” Cantwell said. “The question is, what do you do the next day” with people who take out loans after the loan forgiveness policy. “Would you create a cycle, where every 10-15 years, there’s [a call for] another loan forgiveness program? If so, what is the incentive for anyone to pay their loans?”

Heller argued that programs that target loan forgiveness for students who go into public service, or who took out loans for classes at for-profit institutions with little educational benefit, are a better use of money than universal debt bailout.

“Let’s focus on those who need it,” Heller said. 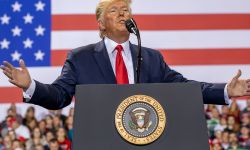 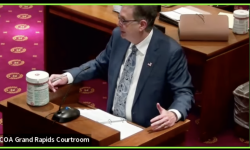 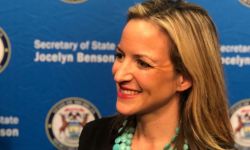