How a U.S. scientist unknowingly starred in an Enbridge Michigan ad campaign

LANSING — Enbridge Energy's statewide ad campaign to promote its efforts to safeguard the Great Lakes features a man reaching over the water to place a buoy in the Straits of Mackinac.

But what the ad doesn’t mention is that the man working in the photo doesn't work for Enbridge.

He's a government scientist who once estimated that a rupture in Enbridge's Line 5 oil and gas pipeline could leave more than 700 miles of shoreline vulnerable to a cleanup.

The scientist, Eric Anderson, is an oceanographer with the National Oceanic and Atmospheric Administration’s (NOAA) Great Lakes Environmental Research Laboratory, an investigation by the Michigan Campaign Finance Network and Bridge Magazine revealed.

An NOAA spokeswoman said neither Anderson nor the agency gave Enbridge permission to use Anderson’s image in the ads, which have been running in newspapers across Michigan for weeks. Two NOAA logos were apparently removed from the original photo.

The Canadian company’s use of the photo has spurred frustration from other NOAA employees, according to multiple sources, and from environmentalists who call the ads misleading.

“I think it’s a big problem. To me, it shows a pattern of misinformation.” 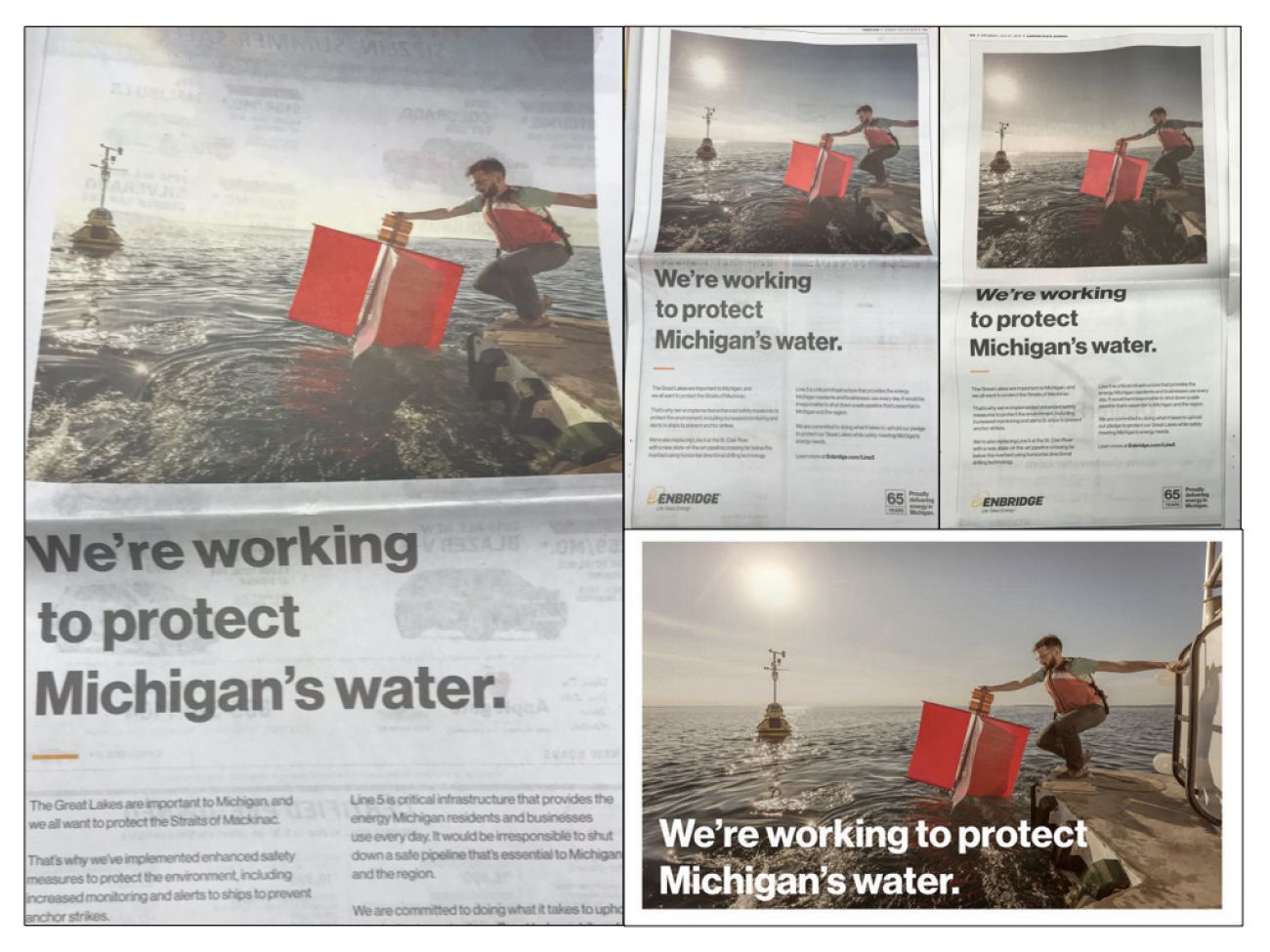 The full-page ads featuring Anderson have appeared in many of Michigan’s largest newspapers, including Detroit Free Press, The Flint Journal, Lansing State Journal, Traverse City Record-Eagle, and other smaller publications, including Cheboygan Daily Tribune and the Mackinac Island Town Crier.

Ryan Duffy, a spokesman for Enbridge, said the company commissioned the photo during a September 2015 oil spill drill.

Duffy initially said Enbridge had asked everyone at that event to sign a release form and to let them know they would be photographed. He later clarified that an Enbridge representative verbally notified participants that the company would photograph them.

“We were unaware NOAA had any concerns about this photo. We are happy to work with NOAA going forward,” Duffy said in an email.

Employees of NOAA’s Ann Arbor-based Great Lakes Environmental Research Laboratory declined to speak on the record for this report saying they feared retribution because they aren’t authorized to speak on the matter.

One person who has worked with Anderson called the ads “dishonest,” noting they showed “U.S. taxpayer-funded work” that was performed because of “the risk the line represents.” Another employee who’s worked with Anderson said it was frustrating that a company would use an independent scientist’s image in its ad campaign.

“If this were me, I would want this redacted,” the person said, adding, “I am working for the public citizen.” 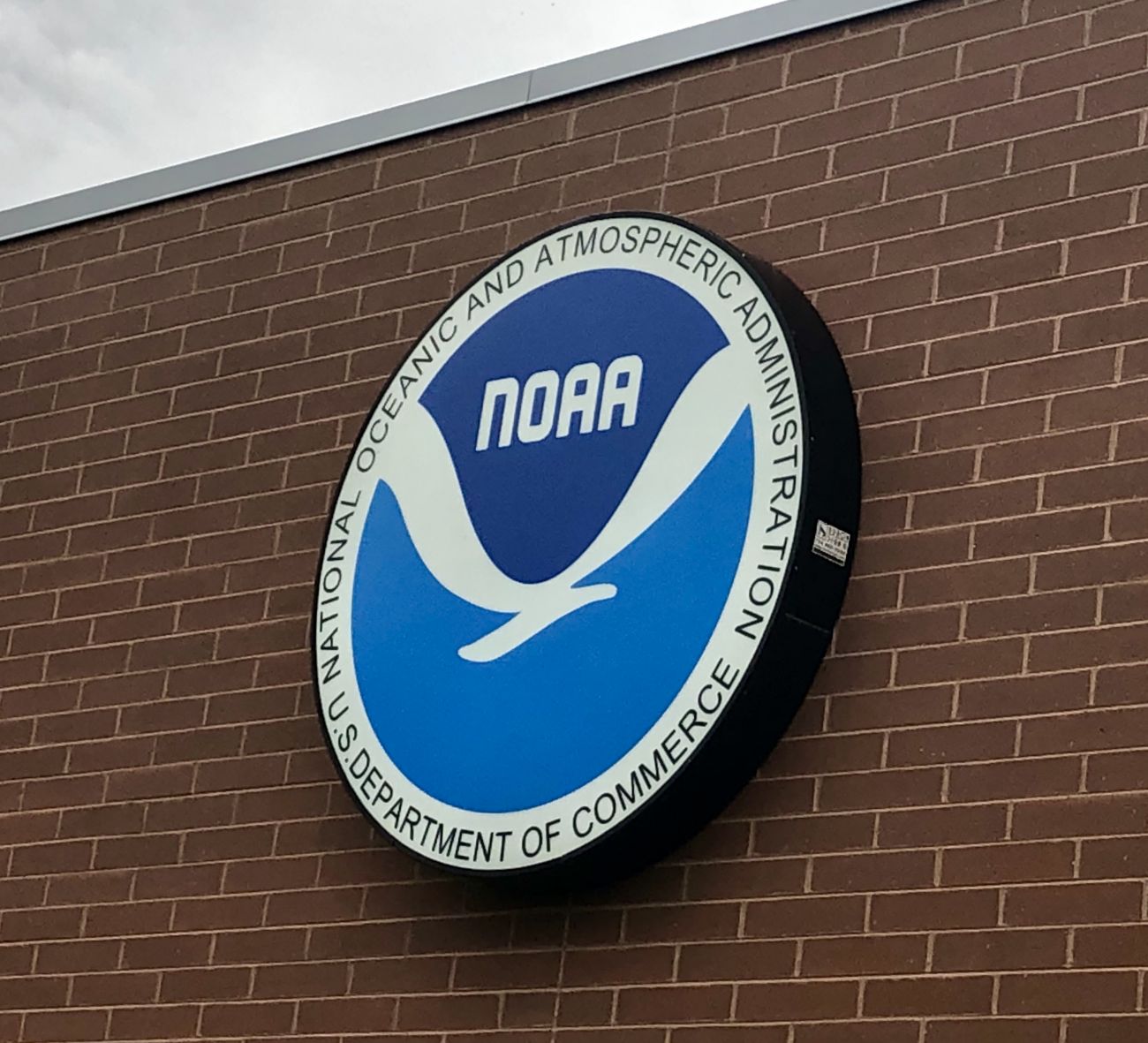 Anderson did not respond to multiple interview requests. Monica Allen, an NOAA spokeswoman, declined to answer questions about how Anderson or the agency feels about Enbridge using his image in its campaign.

“While NOAA provides science to local communities, stakeholders and the public, NOAA takes no position on the issues raised in the company's ad campaign,” she wrote in an email.

NOAA, part of the U.S. Department of Commerce, monitors the environment and climate and helps manage coastal and marine ecosystems. It provides daily weather forecasts, severe storm warnings and information for fisheries management, among other services. The agency also provides technical support for the Coast Guard to clean up underwater oil spills.

The same photo of Anderson also appears on NOAA’s government web pages, including a July announcement that President Trump awarded Anderson a “Presidential Early Career Award for Scientists and Engineers.” 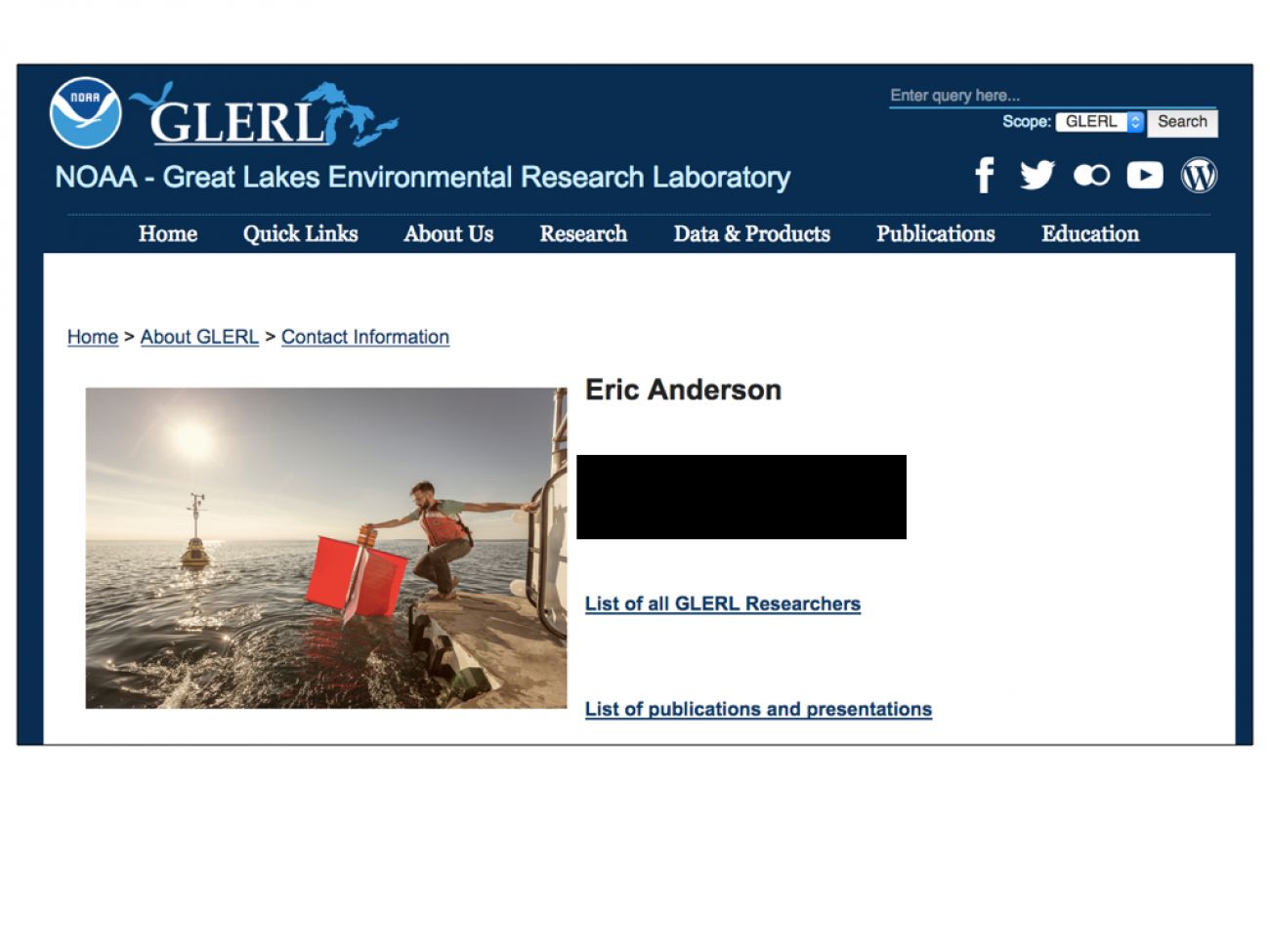 The Enbridge ads are part of Enbridge’s 2019 push to keep oil flowing through Line 5, which carries up to 540,000 barrels of oil and gas liquids per day from Superior, Wisc. to Sarnia, Ontario. That includes a 4.5-mile stretch in the Straits of Mackinac, the turbulent gateway between Lakes Michigan and Huron.

The 66-year-old pipeline has never leaked in the Straits. But it has attracted widespread scrutiny after a different Enbridge pipeline spewed more than 1.2 million gallons of crude into the Kalamazoo River in 2010 and a ship’s anchor damaged Line 5 in 2018. Line 5 has leaked more than 30 times outside of the Straits, the biggest of which happened decades ago.

At NOAA, Anderson helped develop the Great Lakes Coastal Forecasting System. That set of three-dimensional computer models provides information on currents, water temperature, ice and waves in the Great Lakes. It includes a specific model for the Straits, which is crucial for mapping where oil might travel during a spill.

Using that model in 2016, Anderson and a colleague estimated that a Line 5 rupture would expose up to 720 miles of U.S. and Canadian Shoreline to oil needing cleanup.

Anderson considers his work in the Straits “maybe the most rewarding” part of his job, according to an online profile published by NOAA.

“It’s one of the most beautiful spots in the Great Lakes, but also one of the most dynamic, with high-speed currents changing every few days, if not hours,” Anderson was quoted as saying. “A groundswell of attention to the Straits in the last several years has pushed the public to get more engaged and learn about the conditions in the Straits, and I’ve been glad to help where I can.”

Enbridge wants to swap out the Line 5 that runs along the bottom of the Straits for new pipe buried in a bedrock tunnel — a plan backers say would protect the Great Lakes from a possible rupture without disrupting the region’s energy supplies. If given the green light, Enbridge says it could finish the tunnel by 2024.

A host of environmentalists want the pipeline shut down immediately. They say the tunnel would take too long to construct, and it would keep the oil and gas flowing through the pipeline in perpetuity at a time when scientists warn the world must rapidly wean itself from fossil fuels or face climate catastrophe.

In March, Gov. Gretchen Whitmer, a Democrat, ordered state agencies to stop work on the tunnel project, which her Republican predecessor, Rick Snyder, had approved in his final days in office last year. Enbridge sued in Michigan’s Court of Claims in June, seeking to uphold its agreement with Snyder.

Attorney General Dana Nessel, a Democrat, is defending the state in that lawsuit and separately suing to shut Line 5 in the Straits. Her suit in Ingham County Circuit Court called the pipelines “a continuing threat of grave harm to critical public rights in the Great Lakes.”

In its newspaper ads, Enbridge calls Line 5 “critical infrastructure that provides the energy Michigan residents and businesses use every day,” and calls a potential shutdown “irresponsible.”

“We are committed to doing what it takes to uphold our pledge to protect our Great Lakes while safely meeting Michigan’s energy,” the ads say.

But questions about trust have dogged Enbridge throughout the pipeline saga.

Michigan leaders have scolded Enbridge for withholding information about Line 5’s condition. The company, for instance, waited until August 2017 to reveal its 2014 discovery of damage to protective coating along part of the pipeline.

Enbridge has acknowledged its trust issues.

“Trust is earned, and while we have a long way to go, we remain committed to doing what it takes to rebuild trust and uphold our pledge to protect the environment while safely meeting Michigan’s energy needs,” the company said in late-2017 after Snyder signed the first in a series of agreements related to the Line 5 tunnel.

David Holtz, the Sierra Club’s Michigan Chapter chair, said the company’s use of a photo of a NOAA employee in its ad campaign was “deceptive,” considering that NOAA employees would assist in a cleanup were the pipeline to rupture.