A Michigan congresswoman is pushing the federal government to develop a strategy to bolster local recycling programs nationwide — including some in Michigan reeling from a global plunge in prices for recycled paper, plastics and other materials.

U.S. Rep. Haley Stevens, D-Rochester Hills, co-sponsored an amendment to a larger package of spending bills directing the Environmental Protection Agency to develop a strategy to “strengthen markets, reduce contamination, and prevent recyclable materials from needlessly polluting the environment, being incinerated, or sent to landfills.”

“The United States is so far behind in terms of developing and implementing a full-scale recycling industry,” she told Bridge Magazine Wednesday. “We saddle the costs and burdens on consumers and small municipalities. The federal government doesn’t have a strategy.”

The proposal calls the nation’s current recycling system “unsustainable,” and would instruct EPA to examine the benefits of a “national system of standardized recycling labeling,” public education to boost recycling and other methods “to increase the economic viability of processing recyclable materials.”

The Democratic-led House approved the recycling amendment to H.R. 3055 last week. The chamber Tuesday night cleared the full $690.4 billion package, which would fund a litany of federal agencies, including those dealing with commerce, justice and science.

The package’s fate is less certain in the Republican-controlled U.S. Senate, but backers are optimistic that the recycling provision will survive.

Stevens said conversations with municipal leaders in western Wayne County and news reporting — including a story from Bridge Magazine— fueled her interest in improving recycling.

In March, Bridge spotlighted woes in some Michigan communities after China halted imports of certain recyclables last year and spurred a global collapse in commodity prices. One impacted community is the Detroit suburb of Westland, Michigan’s 11th largest city, which rerouted its recyclables to the dump after a company that processed those materials more than quadrupled its rates.

Aside from pushing for fixes through legislation, Stevens has also appealed directly to EPA Administrator Andrew Wheeler.

“We know the enormous environmental and economic benefits of recycling, and we know there is a great need for action at the federal level,” she wrote Wheeler in an April 29 letter, asking what steps his agency was taking on the issue.

Wheeler has yet to respond, Stevens said.

Once a huge buyer of recyclable scrap from the U.S., China in 2018 banned imports of 24 types of solid waste and adopted strict limits for contamination in other materials it accepts from overseas.

The move addressed concerns that too many tainted materials originally labeled as recyclables had piled up in Chinese landfills and harmed the environment. China’s exit from the global market created a glut of commonly recycled materials like mixed papers and plastics, slashing their worth.

Some Michigan communities are suffering more than others.

Those belonging to regional recycling efforts (such as in Emmet County and southern Oakland County) or with longer-term contracts with waste haulers can weather the storm, but those on short-term contracts are at the mercy of private recyclers who are dramatically raising fees.

Mike Garfield, executive director of the Ann Arbor-based Ecology Center, a nonprofit that has advised communities on recycling plans, flagged the country’s “failure to hold packaging and product manufacturers responsible for the design and recovery of their materials” as a major source of the problems. Additionally, communities across much of the country — including Michigan — have built too many landfills, making it easier and cheaper just to dump materials that could be recycled, he said.

Garfield called it “terrific” that Stevens and others were examining the country’s recycling systems — even if large-scale fixes are far from guaranteed.

“It’s been decades since the federal government looked at the question at all, and the neglect is evident,” he said.

Stevens’ efforts come as the Michigan Department of Environment, Great Lakes and Energy (EGLE) is launching a campaign to raise the state’s region-low 15 percent recycling rate and reduce contamination that erodes the value of materials.

Unveiled Monday at a Lansing press conference, the “Know It Before You Throw It” educational campaign is part of a wider $15 million recycling effort — approved by the Legislature in 2018 — that offers grants to help communities improve facilities and build up local markets to use recycled materials. 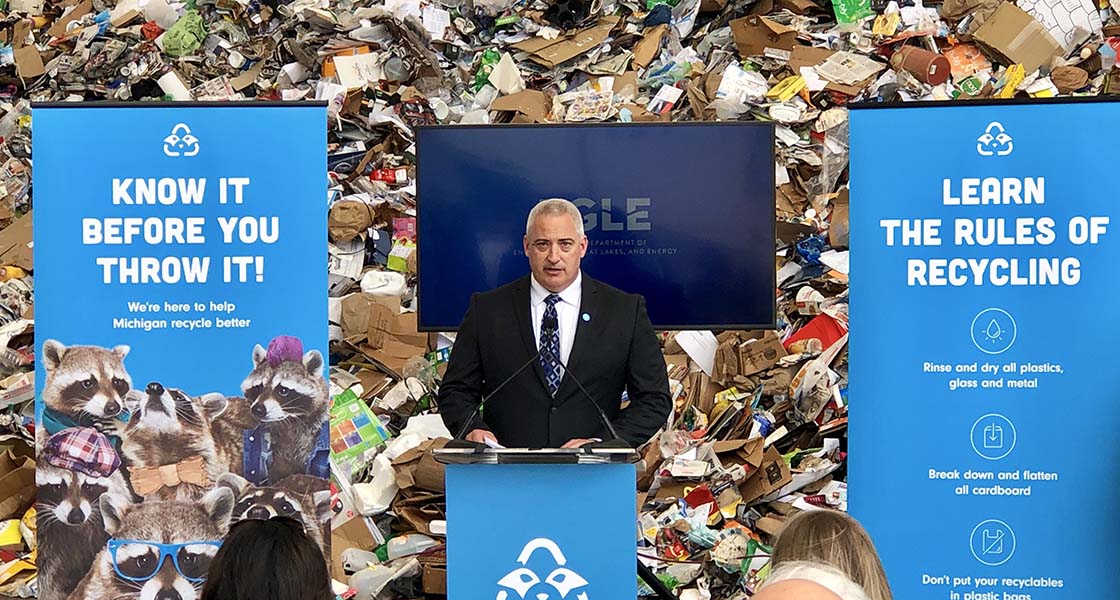 Jack Schinderle, director of materials management at the Michigan Department of Environmental Great Lakes and Energy, speaks at a kickoff event for the agency’s “Know It Before You Throw It” recycling education campaign. (Bridge photo by Jim Malewitz)

Half of Michiganders incorrectly believe they can recycle plastic bags, which most municipalities don’t accept, according to EGLE-commissioned surveys. And 76 percent of residents were not aware of the need to rinse and dry recyclables before dropping them into bins, to avoid contamination.

“Recycling's been treated like roadkill in Michigan for 30 years," he said.

The deadly disease that wiped out 90% of the Upper Peninsula’s bats, and a new hope for one species

A new study shows a glimmer of hope for bats affected by white-nose syndrome. 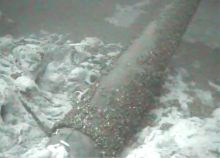 As the Public Service Commission considers whether to allow Enbridge to move pipelines into a tunnel, opponents hope to elevate the case into a broader discussion over whether Line 5 is good for Michigan.

I’m afraid that we are looking at the wrong end of the recycling chain. You can’t continue to make buggy whips when the horse has been replaced by the automobile. What we should be concentrating on is figuring out what products could use a recycled material as their base. As an example, carpet fabric could use plastic milk containers and pop bottles. Finished aluminum could use recycled aluminum as part of its content. Artificial wood could use plastic materials as part of its content. Cardboard could be made from scrap paper. And on, and on, and on. Once you establish the demand for raw recycled material to go into a product, it will be much easier to look at the other end and of the chain and figure out what is needed to keep that industry going. No one who uses recycled newspaper as an example wants their supply of raw material to contain glossy plasticized matter or lots of staples.

It's almost like most of what you said is already being done!

How do you know it isn't and what is it that you think isn't being made with recycled plastic milk jugs In another Bridge article they stated that milk jugs were one of the most lucrative of the plastics . And carpet fibers?

The carpet? There is a lot more than fibers to carpet. And I don't know if it is all lucrative to the industry. So coming from your economic perspective, you better check the industry. I just note that on my handy recycling information note I received from my township, Carpet isn't on the recycling list.

But hey! you are the genius! And you seem to come up with all the solutions but have none of the answers.

Must put pressure ($) on manufacturers using the packaging to reduce and find alternatives.

MSU has a School of Packaging. Why don’t we ask them to come up with a plan to eliminate 50% of the packaging material that surrounds the product I’m really buying? Or how about developing 100% compost friendly packaging? And then get government to require manufacturers and stores to comply. I read a book when I was in college back in the 60’s called “Blaming the Victim”. When I’m made to feel guilty about my recycling habits I feel like a victim. Let’s focus on the source of this problem, not the consumers who don’t really have choices.

Good points but I think you need all three - up front, middle and the end.
Up front - product and packaging reduction, biodegradable, compostible, etc.
Middle - Consumer recycles PROPERLY and according to regs.
End - create a market for recyclables ( tough one because someone has to "make a buck")
I think it is Sweden that has 95% recycling success. They are forced to do something plus they want to. Tough regs and penalties on the consumer that doesn't recycle. But that is the middle portion mentioned above. Not sure on how they handle packaging and creating a recycling market. But what they are doing seems to work.
Not matter what, it is time for change. I am a conservative and normally want less government regs. But we can't just keep throwing things away. And as a consumer I have done, and will continue, to do my part.

>>>>>I think it is Sweden that has 95% recycling success.
Sweden burns its municipal solid waste for energy recovery.
https://www.nytimes.com/2018/09/21/climate/sweden-garbage-used-for-fuel....

A better system with lower emissions and a usable byproduct would be to gasify
such waste, using syngas for electricity generation and byproduct solid residues
as construction aggregate.

Thank you Alex Sagady for posting the link to Sweden and how they recycle and process waste! We could learn from Sweden. In the long run it may be worth the time and investment to use some of Sweden's practices.
With our advanced technologies and brilliant scientists, it would seem there are more things that can be pursued to help. Read about plastics being experimented with in asphalt production. Also experiments with totally recyclable plastic ( which is currently very difficult to recycle). Also tires used in asphalt is already ongoing. So keep it coming! These ideas, plus packaging and product container changes as well as everyone doing their part will help chip away at the concerns mentioned in the article.

Recycling sounds like plan now. If China could afford to pay for it and then use it sounds to me like it has value. Sweden plan sounds excellent too. If we can use it safely for picnic benches, roads, decks and use in place of wooden train tracks no decay and same strength I'm told. We need to reuse it not bury it. Sounds like the representative from Michigan
made a good plan.