Michigan was once a leader at recycling. Today, it’s the pits.

Michigan Environment Watch
Michigan was once a leader at recycling. Today, it’s the pits.

LANSING — Michigan was once a recycling pioneer.

In 1978, it became the first big industrialized state to implement a deposit law for bottles and cans. The 10-cent deposit was meant to keeping the containers from going to landfills or worse — rolling along highways and streets.

Four decades later, the deposit policy — etched into pop culture through a 1996 episode of “Seinfeld” — is a hands-down success.

But the state’s broader track record on recycling stinks, according to most everyone following the issue. That means more of the state’s waste goes on to fester in landfills, where it might pollute water if not properly monitored and even help speed climate change. (Decomposing garbage sends heat-trapping methane into the atmosphere. Municipal landfills are the nation’s third-largest source of human-induced methane emissions, according to the U.S. Environmental Protection Agency.).

Gov. Rick Snyder has spent years unsuccessfully trying to increase recycling. He wants to raise fees to support recycling programs and increase the state’s rate, 15 percent, which is well below the national average of nearly 35 percent,  according to the U.S. Environmental Protection Agency.

“This has probably been one of the most disappointing initiatives I’ve had in my time as governor,” the term-limited Republican said in his State of the State address this year. “We’ve gotten complacent, we thought we did the deposit law so were doing great on recycling. We’re behind.... We have to do more, it’s for our own good and it’s for the well-being of our society and our world.”

What happened? How did Michigan fall behind, and what are some lawmakers trying to do to reverse course? Here are seven things to know.

Michigan is among the nation’s worst recyclers overall, despite its “bottle bill” success

Michigan’s redemption rate on eligible containers consistently hovers well above 90 percent, and residents reclaimed more than $10.4 billion of about $10.8 billion paid in deposits from 1990 through 2016. Two months ago, state Rep. Jon Hoadley, D-Kalamazoo, introduced legislation that would expand the deposit law to water and juice bottles. The bill has yet to receive a hearing.

But containers with deposits make up a small fraction of the recyclable waste people toss — cardboard, various types of paper, plastic bags and packaging and textiles, to name a few.

Michigan is considered worst recycler in the Great Lakes region and “clearly in the bottom portion of the country,” says Sean Hammond, deputy policy director for the Michigan Environmental Council, a Lansing-based advocacy group. National rankings aren’t available because because methodologies vary, and some states don’t collect such data at all, according to the EPA and reports from other experts. 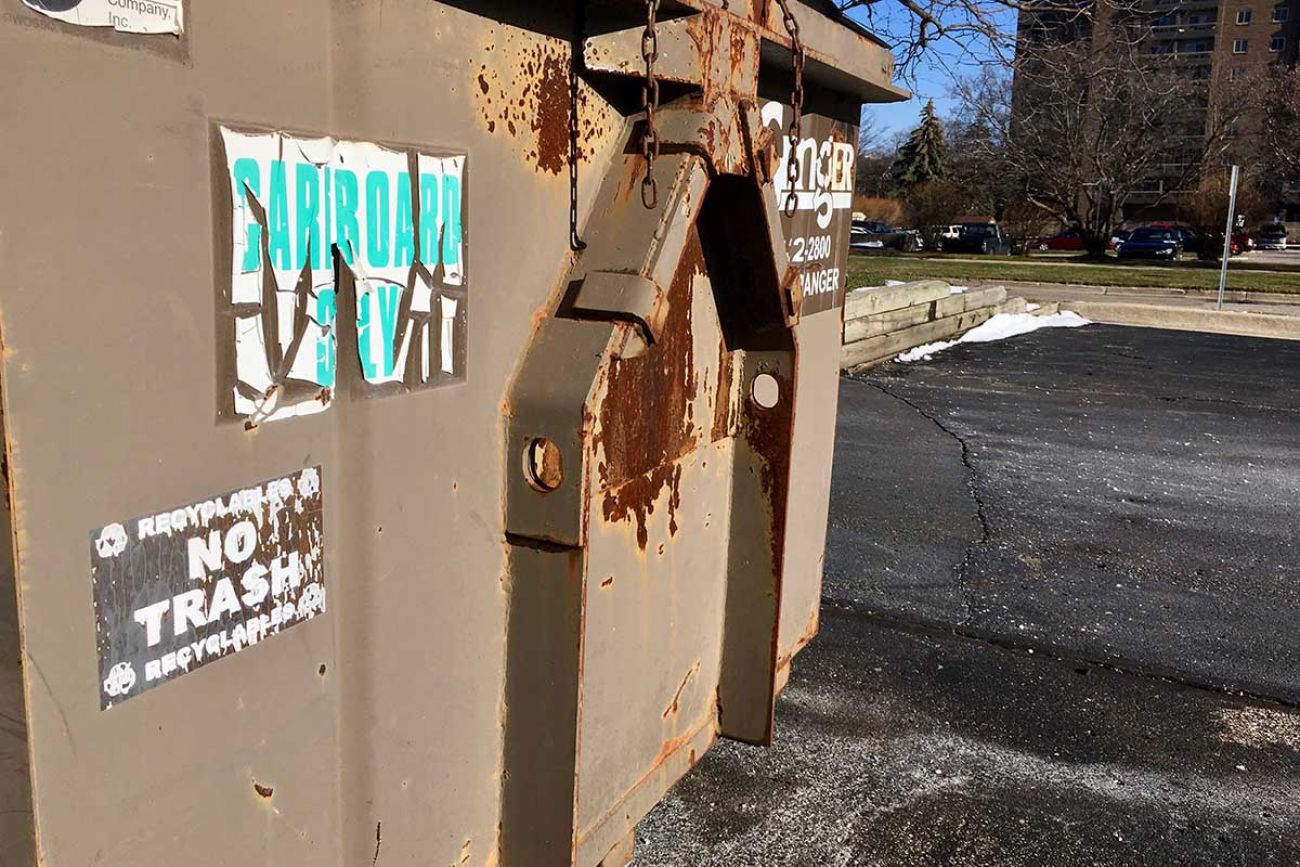 Michigan only recently began collecting broader data on recycling. Nationally, the rate of recycling has more than doubled in the past 30 years, according to the EPA.

Michigan has made landfill dumping cheap and easy

The landfills are among the country’s cheapest to use. That “makes it extraordinarily easy to throw something away instead of recycling it,” Hammond says.

Why? Supply and demand. The state over the years built out vast new spaces for dumping during the 1990s under then-Gov. John Engler. It was an era of nationwide concerns about running out of space for waste, leading to headlines in Michigan such as: “Garbage Glut Swells in Landfills.”

Landfill proposals at the time were often highly controversial, drawing opposition from environmentalists and even county officials, but state environmental regulators continued to greenlight them. With so much extra space, dumping prices plunged.

“The state allowed far more to be permitted than was needed for Michigan’s waste,” says Mike Garfield, executive director of The Ecology Center, an environmental nonprofit that, among other efforts, has sought to bolster recycling in Ann Arbor. “Within a 5- to 10-year period, Michigan went from a state with middle-of-the-road prices for landfills to dirt cheap.”

Rather than encouraging reuse and recycling, state law required counties to maintain a certain amount of landfill capacity.

Low landfill prices made Michigan a prime dumping spot for other states — and Canada. More than a quarter of waste sent to Michigan landfills in 2017 came from outside the state, and 82 percent of the imports came from Canada, according to a Michigan Department of Environmental Quality report.

While Michigan has made landfill dumping easier, it’s done little to help communities invest in recycling.

“The only way to make that possible in Michigan is to have very strong pro-recycling policy or strong market conditions," Garfield says. “In lieu of that, local governments have to take that initiative.”

In much of Michigan, it’s not easy to recycle

Just 67 percent of Michiganders had access to curbside recycling or a convenient drop off facility as recently as 2013, according to a survey by the Michigan Department of Environmental Quality. Some counties, particularly in stretches of the Upper Peninsula and northern Michigan, had virtually no convenient access.

Even Detroit, the state’s biggest city, didn’t add curbside service until 2014, and a small fraction of now residents use it because the city requires them to opt-in and buy a $25 bin (The city does offer free options — for residents who attend a recycling workshop or register a certain score in an online “Recycling Challenge.”) 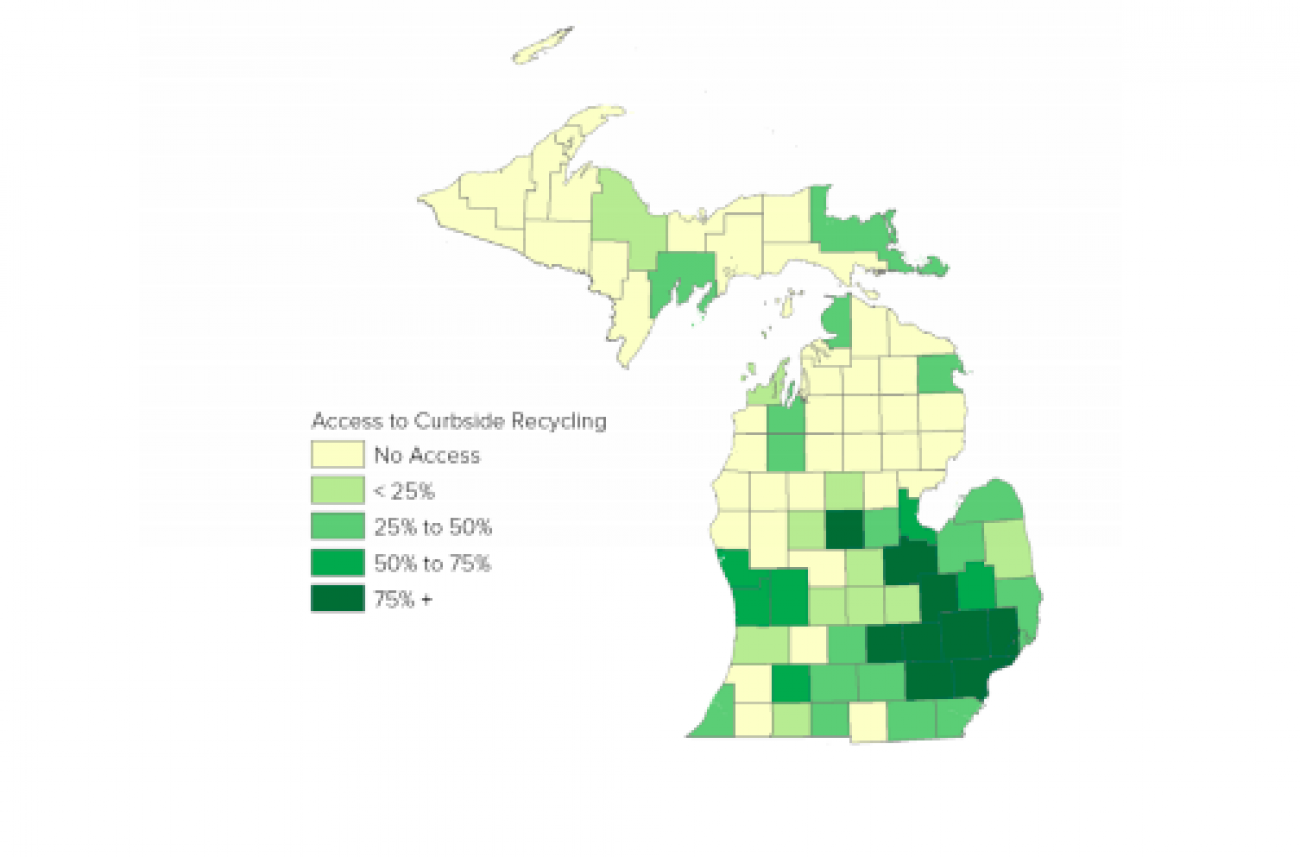 Local governments are stuck with garbage duty, but have few resources

Experts say a few local Michigan governments that have taken initiative: Emmet County, at the tip of the Mitten, is a rare rural success story, having run successful curbside and drop-off recycling programs for years.

But Emmet County is one of the wealthiest in Michigan, and most counties don’t have the money and expertise to invest in recycling.

Neither local governments nor the DEQ have received state funds to rewrite waste management plans — whether on the landfill or recycling side — since the late 1990s, according to a 2017 report from he Michigan Solid Waste and Sustainability Advisory Panel, which Snyder assembled to propose an overhaul of the state’s waste disposal laws. That means recycling practices are often stuck in the past. 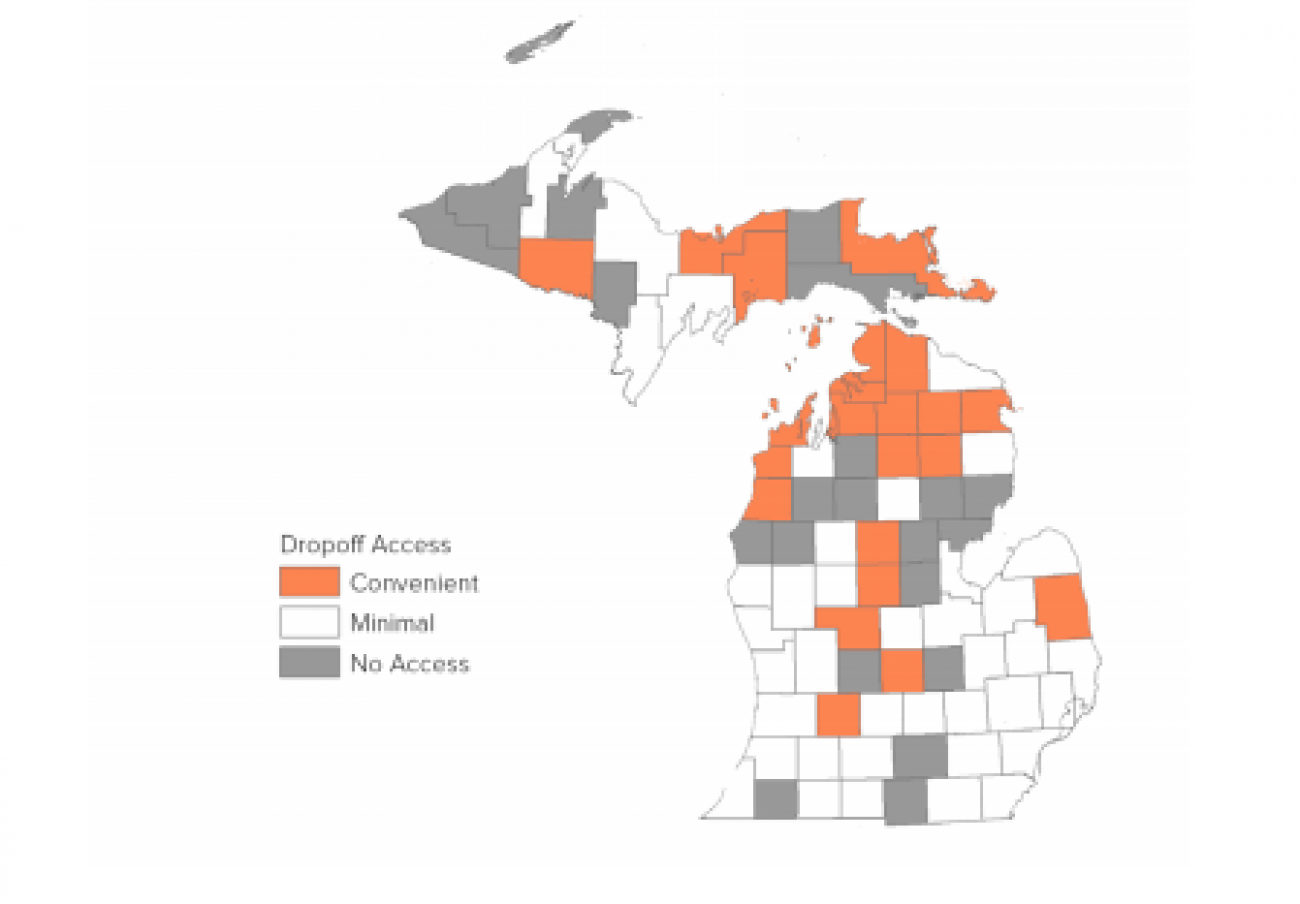 Since state funding dried up in the 1990s, “local expertise went away. I would say maybe a dozen counties have done any plan updates since the early 2000s,” said Hammond. And most of those updates were geared around landfills rather than recycling.

“We’re really not going to make headway on recycling in Michigan without creating a major local funding source,” Garfield said.

Emmet County, for instance, funds its recycling effort by selling recycled materials and through fees on private waste haulers and folks using the program.

Recyclers also operate at the whims of a global market, and commodity prices fluctuate month-to-month.

Recyclers have recently struggled to fetch good prices for a litany of products, including cardboard and plastics. The market for glass is particularly rough, causing some communities — including the University of Michigan — to stop collecting it for recycling.

Michigan charges a 36 cent “tipping fee” on each ton of waste disposed of in its landfills. That’s far lower than other Great Lakes states. Snyder wants to increase the fee to $4.75 per ton, matching Ohio’s rate.

His office estimates the increase would raise $79 million if he pushes the effort through the legislature. (The change would cost the average Michigan family about $4.75 extra per year.)

Snyder has proposed using most of that money for toxic cleanups. But he would put some $15 million towards his recycling goals. Most of the recycling money would be doled out to counties through planning grants for education, building recycling centers and buying equipment and marketing sales of recycled material.

More legislation could be on the way

Snyder’s advisory panel — comprised of environmentalists, industry representatives, local officials and others — is working on wide-ranging legislation to make state law less deferential to landfills and more friendly to recycling.

Among other provisions, the proposal will likely include funding and other incentives for counties that set and reach recycling goals, said Hammond, a panel member.

“This is kind of a fresher focus on recycling than we’ve ever seen, said Hammond, who hopes to see the legislation introduced by the end of April.

The bills would face an uncertain future.

Hammond said he believes legislation has a chance to reach Snyder’s desk. But recycling requires money, and any reforms would require buy-in from a Republican-controlled Legislature often reluctant to raise taxes or fees.