LANSING—Under a steady drizzle in October weather barely above freezing, thousands of supporters of President Trump gathered outside a hangar at Capital Region International Airport Tuesday to hear the president bid for their votes one week before Election Day.

He also took detours to complain about the media (in particular, a contentious interview with Lesley Stahl of “60 Minutes” in which he walked out), falsely claim he was selected “Man of the Year” in Michigan 12 years ago, rail on federal fuel economy standards and Antifa and complain of absentee ballots he said are being processed without verified signatures (which is not the case in Michigan).

Even as Trump took the podium nearly an hour after he was set to speak, a line stretched for blocks of people wrapped in ponchos and MAGA gear to get in. Here are some claims the president made while you stayed warm.

The media and COVID-19

Trump told the crowd of his experience being treated for COVID-19 by some of the nation’s top doctors. (“They grabbed different parts of my body. They all were specialists.”) He said he will make an experimental drug he received “available to everybody free.” He pledged to deliver a vaccine that will end the pandemic, which he said would have taken years longer if he wasn’t president.

He implied the media overplay the spread of the coronavirus and said that the reason the U.S. appears to have a rising case count is simply because it has high rates of testing.

It’s a claim he’s repeated since the beginning of the pandemic, and which has been regularly debunked by health experts. The U.S. testing rate is similar to many other affected countries, despite having the largest outbreak in the world.

Trump has made a habit of claiming he saved the auto industry in Michigan when speaking to swing-state supporters.

On Tuesday, he said it’s been decades since a car plant was built in the state.

“Nobody’s done for Michigan what I have. You have car plants being built all over. And you didn’t have a plant built in 42 years,” he said.

Michigan has, in fact, had a car plant built since 1978. In one case, General Motors built a vehicle assembly plant a stone’s throw from where he was speaking — in Lansing Delta Township — in 2006.

Trump spoke one week after General Motors Corp. announced it is spending $100 million at that plant as part of a $2 billion-plus investment nationwide.

Since Trump became president,  Fiat Chrysler has announced a $4.5 billion investment in Michigan including its first new plant in the state in nearly three decades, while Ford is spending $740 million to transform Detroit's Michigan Central Depot  into a mobility research center and investing another $700 million at a plant in Flat Rock. 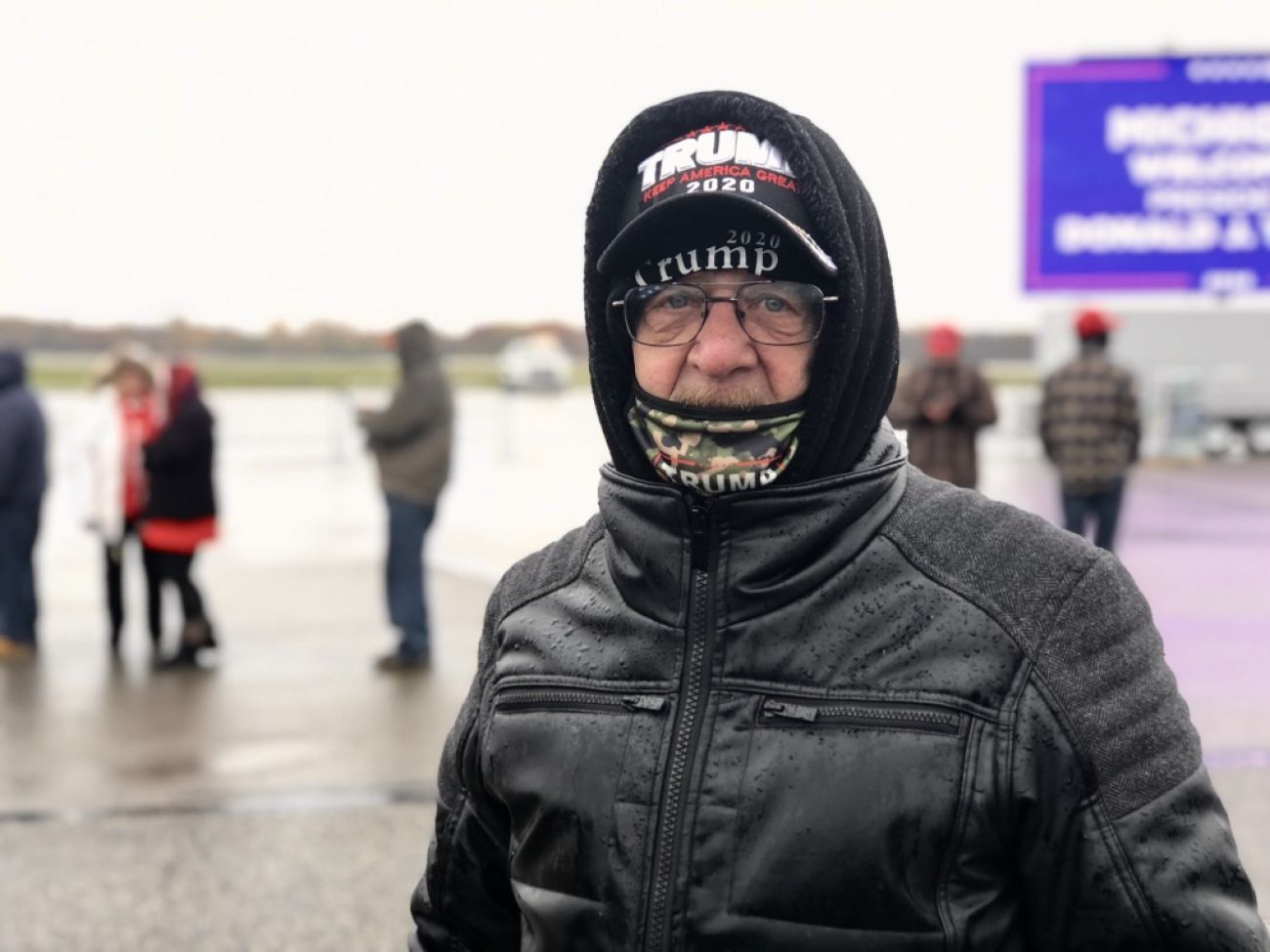 Trump’s refrain about Rust Belt states losing auto and manufacturing jobs to foreign countries — which is true — hits home for many Michigan voters, including Dennis Morris, a 72-year-old retired machinist from Taylor who attended the rally.

“I remember when all the jobs went overseas,” Morris said. “I went through three recessions and raised two boys on my own. I pulled myself up by my bootstraps, something [the Democrats] don’t understand.”

Another shot at the governor

Trump again railed on Gov. Whitmer for policies put in place to curb the spread of the coronavirus. And when a chant of “lock her up” erupted from the crowd, he said he has to be careful not to “make even a little bit of a nod” because people will claim he was egging them on.

“Get your children back to school. Your governor is a disaster. They’ve got to open up this state,” he said, later adding: “It’s a choice between a Trump boom or a Biden lockdown. But you’re already locked down.”

In fact, schools have been open — in many places for in-person instruction — in Michigan since the beginning of the fall semester, with local school districts (not the governor) making those decisions.

The law Whitmer used to issue executive orders was struck down by the state Supreme Court, but the administration has used health department orders to retain some protections, such as a requirement that businesses take safety precautions or people wear masks while in public.

“We won that big Supreme Court case against your governor, so what the hell happened? It’s still not open,” Trump said.

Whitmer, who is a national co-chair of the Biden campaign, has said Trump’s commentary about her is “exactly the rhetoric that has put me, my family and other government officials’ lives in danger.”

Earlier this month, Michigan Attorney General Dana Nessel and federal officials announced charges against a group of men who allegedly planned to kidnap the governor from her northern Michigan vacation home and take her to Wisconsin.

Sen. Tom Barrett, R-Charlotte, was at the rally Tuesday and argued it’s not fair to say Trump’s comments egg on threats. “If you can’t criticize a governor for her policies, I don’t know how you would ever have freedom of speech and respect for one another's' differences.”

An appeal to women — and their 'husbands'

Suburban women remain one of the white whales of the 2020 election, with both Biden and Trump fighting for their affection in order to win over states like Michigan. White women were a key demographic in securing Trump’s win four years ago.

Trump has begged for women to “please like me” in recent weeks, and he hit on that again Tuesday, while making it very clear that he loves them back.

“If Biden and the Democrat socialists are elected, they will dismantle your police departments, dissolve our borders, indoctrinate your children and destroy the suburbs,” he said.

“Women, suburban or otherwise, they want security. They want safety. They want law and order. I love women and I can’t help it, they’re the greatest. I love them much more than the men.”

He added that their “husbands want to get back to work” — a remark that quickly drew online blowback.

National polling suggests suburban women have soured on Trump and are now mobilizing against the president.

A threat on refugees

“One of the biggest issues for Michigan is the subject of refugees. Where are they coming from? Biden has pledged a 700 percent increase” in refugee admission to the U.S., Trump said. “His policies will turn Michigan into a refugee camp. It’s true.”

Refugees are people who say they are unable to return to their country because of a “well-founded fear of persecution” due to race, social group, political opinion, religion or national origin. They have to undergo extensive background checks before they’re allowed to enter the U.S.

Trump also said Tuesday he would “ban deadly sanctuary cities.” There are no cities in Michigan that call themselves “sanctuary cities” (that is, local governments that limit cooperation with federal immigration authorities) — Lansing was one, until it reversed that decision — but Kalamazoo, Washtenaw, Wayne and Kent Counties have city- or county-level policies that don’t always align with Immigrations and Customs Enforcement.

“Get your friends, get your family, get your neighbors, get your coworkers. Don’t let the radicals win,” the president said. “Get out and vote.”