How a California college program for inmates pays returns for taxpayers

LANCASTER, CA – At least once a week, faculty from California State University Los Angeles make the 90-mile trip across the San Gabriel Mountains to this Mojave Desert town. Here, inside a maximum security prison, they lead classes that are identical in curriculum and grading to the classes offered on the school’s palm-lined campus.

The only difference:  The incarcerated students make better grades.

The inmates, many serving life sentences, say they spend 50-60 hours a week studying. “There’s not a con in here who doesn’t just read the material, they devour it,” said Duncan Martinez, serving life without the possibility of parole for murder. “If there’s been one complaint, it’s that sometimes the class doesn’t go fast enough.

“So much of prison is being treated like nothing you do matters,” Martinez said. “This matters.”

Why give killers – or any prisoners – a free college education, when those outside of prison walls have to pay?

It’s a question being asked 2000 miles away in Michigan, where a fledgling college credit program at seven state prisons may run out of funding in 2019.

Lessons for Michigan may lie inside the barbed wire-topped fences of Lancaster’s California State Prison, Los Angeles County, where inmates can earn bachelor’s degrees in communications.

“People say, ‘Why should we spend money on prison education?’” said inmate Richard Fontes, 51, serving a life sentence. “The answer is, it’s an investment.”

The classes sound like a perk for people who’ve committed crimes, but the program has an economic benefit. Inmates who pursue general or vocational education in prison have lower rates of recidivism. That helps lower the crime rate, makes it easier for inmates to secure a job once released and thus lowers the prison population.

The program also helps change the culture inside prisons, said inmates, echoing studies showing a link between prison education and a reduction in disciplinary infractions.

“I was 26 when I got to prison,” said Tin Nguyen, now 45 and serving life without parole. “My first day, a guy gave me a knife and told me to go defend a table. Now, I carry books instead of knife. This program is changing the mindset of a new generation of prisoners.”

“It changes the complexion of what goes on in the yard,” said inmate Martinez. “I walked by a table and there were four guys discussing Dostoyevsky’s ‘Notes from Underground,’ and none of them were in the class. They had cellmates who were in the class.”

Sarah Black teaches writing and communication to students on the Cal State Los Angeles campus and in the Lancaster prison. The inmates are “well above the level of students on campus,” Black said. The average grade point average for the imprisoned Cal State students is 3.61 on a 4-point scale, compared to 3.25 for students on campus.

That’s partly because the prisoners spend more time on their classwork, and partly because they don’t want to screw up the opportunity they have, said Taffany Lim, the prison college program coordinator and senior director of the Center for Engagement, Service and the Public Good at Cal State Los Angeles.

“They are very protective of the program,” Lim said. “They know how lucky they are. One student was failing a class, so they tutored him so he would pass.”

Inmates in the program who are released from prison can continue their education at the Cal State LA campus, where Lim also coordinates a program on campus for ex-cons. Project Rebound helps the formerly incarcerated navigate life on a college campus. The program offers guidance, but no financial support. It’s one of about 50 re-entry programs at California state colleges and community colleges.

Ex-con Anthony Robles graduated in May with a degree in sociology. Now, he’s tracking and mapping police violence in Los Angeles County with the help of a $50,000 Soros Justice Fellowship.

He graduated with a 3.7 grade point average and was honored as the Cal State Scholar of the year at the Los Angeles campus.

Ex-cons “recognize the importance of opportunities,” Robles said. “Most of us have been through things that makes us just grateful to be alive, and to be in a setting like this that most of us probably never even dreamed of. I think we realize we need to hustle and take advantage of it. That makes us overachieve.” 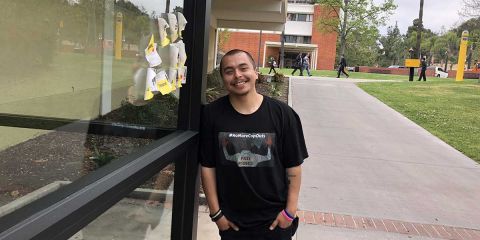 Between having a father deported three times, a mother battling cancer and his own run-ins with the law, Robles didn’t think about attending college. He barely graduated high school “At one point, I thought I’d quit (high school) just to spite the world, said the 25-year-old. “Now I’m traveling to New York for a fellowship and drinking Corona with the (Cal State LA) chancellor.”

Robles makes a passionate pitch for college programs for convicts and ex-cons.

“The benefit to the public is people coming out of prison will have an opportunity to change their lives around and contribute to their communities,” Robles said. “People really transform their lives through education. And it’s super cost-effective. It costs more to house someone in a California state prison than it does to go to Harvard.”

Cal State LA spends about $275,000 a year on the prison program in Lancaster and Project Rebound on campus, with the funding coming from the Opportunity Institute, a California-based nonprofit that promotes social mobility and equality. There are 45 inmates enrolled in the program at the Lancaster prison, meaning the cost per prisoner is no more than $6,000 a year.

Robles said the program helps everyone involved, “Especially people who are prone to committing a crime again. Why not just educate them? It’s cost-effective and can transform a society.”