[This article has been updated]

A decision to try to close Benton Harbor High School is causing Michigan Gov. Gretchen Whitmer to face some harsh blowback from her political base, the majority-black community of Benton Harbor where she earned 95 percent of the vote in the 2018 election.

In a demonstration Tuesday in Lansing, Benton Harbor Mayor Marcus Muhammad and other speakers expressed frustration regarding Whitmer’s proposed plan to close the community’s only high school. The closing would send students to 10 other high schools in surrounding communities.

“We are here today to appeal to Gov. Whitmer,” Muhammad said. “We’re not here to be rabble-rousers. We’re here to seek justice.”

The Benton Harbor School Board has until  June 14, to either approve or reject Whitmer’s plan to dissolve Benton Harbor High School. The board, which has said it will not even vote on the plan, risks dissolution of the entire school district.

Administration officials have maintained that dissolving the district, such as happened with Inkster and Buena Vista in 2013, would require a vote by the Legislature. But at least one expert suggested that Whitmer appears to have a much easier path to blowing up the struggling district, if she so chooses.

“The authority to dissolve districts under the School Code resides with the state superintendent and the treasurer,” Craig Thiel, research director for Citizens Research Council, said in an email to Bridge. “(There is a) lot of misinformation going around … Amazing that the State Board was led to believe it is the lawmakers call on dissolution.”

A 2013 legal analysis of the law, sent to then-Supt. Mike Flanagan and Treasurer Andy Dillon, said in part:

“.... a school district shall lose its organization and shall be declared dissolved if, after consultation with the intermediate school district in which the school is located, the Superintendent of Public Instruction and the State Treasurer jointly determine that the factors of Section 12(1)(b) of 2013 PA 96 apply to the school district.”

You can read the letter here.

But Whitmer's office disputed that the law applies to the situation in Benton Harbor.

A district must meet six factors to the satisfaction of the treasurer and state superintendent before the 2013 law can be invoked. Benton Harbor's struggles likely meet five of those factors: it's made poor progress in eliminating debt; its debt is growing; a case can be made it is not financially viable, it has student enrollment between 300 and 2,400 and hasn’t consolidated with another district.

Marty Ackley, director of public and governmental affairs for the Michigan Department of Education, had told Bridge the law was still in effect, and that it could be considered if all factors are met, but is considered a “last resort.”

Instead, according to Ron Leix, communications officer at the Department of Treasury, “in the case of Benton Harbor Area Schools, the state of Michigan has offered the school district a proposal that preserves the school district by closing the high school and converting the district to a K-8 district.

At minimum, such an interpretation of the dissolution law would give Whitmer more leverage in negotiations with the district, Thiel said.

Whitmer has said her plan is meant to address both high debt and low academic performance in the district.

“There are problems (in Benton Harbor schools),” Muhammad acknowledged. “But allow for us to solve our problems. Don’t come in with a sledgehammer. Come in with an open hand to support the district – the only black (majority) district in the entire Berrien County.”

The Benton Harbor School Board proposed a plan of its own Monday night, which is set to be presented to the governor on Wednesday. Muhammad says he supports this alternative, which he did not outline to the media Tuesday. He said he hopes to “to see Governor Whitmer work with the school board.”

Pastor Carlton Lynch of Pilgrim Rest Baptist Church in Benton Harbor, who also spoke at the event, cited Whitmer’s 2017 visit to Benton Harbor when she was campaigning for governor. Lynch said she then laid out an educational plan for the city’s struggling schools that “had nothing to do with shutting down the school” but rather to “strengthen that which remained.”

“It frustrates our community, especially a predominantly African-American community that has supported Democrats,” Lynch said. “And it almost makes us believe that this candidate, who is now our governor...has taken advantage of the black vote. And now our heart is broken.”

Whitmer defended her plan Tuesday. “We put a thoughtful solution on the table,” Whitmer told the Michigan Legislative Black Caucus, according to The Detroit News. “If someone has a viable alternative that [The Michigan Department of] Treasury and MDE [Michigan Department of Education] feel addresses the outcomes for kids as well as the debt, than I’m certainly interested in considering it.”

Joining the protests Tuesday were other Democrats.

“Never did I imagine that after eight years of Rick Snyder dismantling public education that his policies would find life for a third term under the new (Democratic) governor, Gretchen Whitmer,” said state Rep. Isaac Robinson, D-Hamtramck. “Public opinion is clear: We don’t want to close that high school. Gov. Whitmer has a choice, and let’s hope that she can work it out.”

Robinson also criticized Whitmer for another decision she made in office: the recent no-fault auto insurance deal forged with a Republican-led Legislature.

“Gov. Whitmer and the legislature sold us out by not addressing redlining and letting survivors down when they did the car insurance deal in the middle of the night,” Robinson said. “No more broken promises...I’m tired of talking points saying you ended redlining. I’m tired of the campaign statement you sent out to Benton Harbor saying you’re going to stand with the public schools, but then you come out here and stand with the DeVos privitizers.”

Lily Schulting, who is from Grand Rapids and ran for a position on the state Board of Education last year, said she attended the demonstration as an “ally” for the Benton Harbor community.

Despite being adamant about keeping Benton Harbor High School open, Muhammad expressed hope for a compromise.

“We’re asking for the governor, her staff and the legislators to be restorative, not punitive,” Muhammad said. “We want to work with the governor ... We’re hopeful for the best. We want the governor to be successful. But not at the expense of the City of Benton Harbor and Benton Harbor High School.” 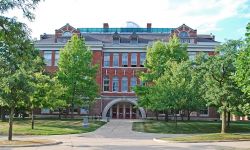