Elissa Slotkin, left, is the incumbent Democrat who recently moved to Lansing in a bid to continue representing the capital region in the new 7th Congressional district. Tom Barrett, right, is a Charlotte Republican who serves in the state Senate and hopes to flip the seat. (Bridge photos by Lauren Gibbons)
October 17, 2022
Lauren Gibbons (Email)
Michigan Government
2022 Michigan election

WILLIAMSTON — Wearing a Lions jersey and standing behind the bar at Williamston Roadhouse, Republican congressional hopeful Tom Barrett spent a Sunday afternoon ringing up burgers and beers while making the case that he is the right guy to send to Washington.

At one point, his young daughter, who’d joined him on the campaign trail, took a break from coloring and playing with the owner’s dogs to show him a dollar she’d procured.

“You’ve got a dollar? Awesome. It’s only worth 80 cents in Biden’s America,” Barrett quipped.

The day prior, Democratic incumbent Rep. Elissa Slotkin’s weekend plans involved speaking to a picnic gazebo full of people in St. Johns, a small city better known for its mint farms and cider mills than its political importance. She took questions about abortion rights, immigration and how to convince friends and neighbors that the 2020 election was legitimate.

Slotkin acknowledged to attendees that it’s the heart of political “silly season,” joking that “if you're anything like my father, you can’t turn on the television without wanting to shoot it because of the attack ads.”

Welcome to one of the most competitive U.S. House races in America.

As of Oct. 12, the 7th district is the nation’s most expensive congressional race, clocking in at $27 million overall according to an analysis of political campaign spending by AdImpact. The Cook Political Report indicates the district currently leans in Slotkin’s favor.

The firm found Michigan is the fourth-highest state overall in House general election spending, with $52 million spent or reserved so far.

Slotkin and Barrett are running to represent the newly created 7th Congressional District that unites the state’s capital region in central Michigan is a political tossup. 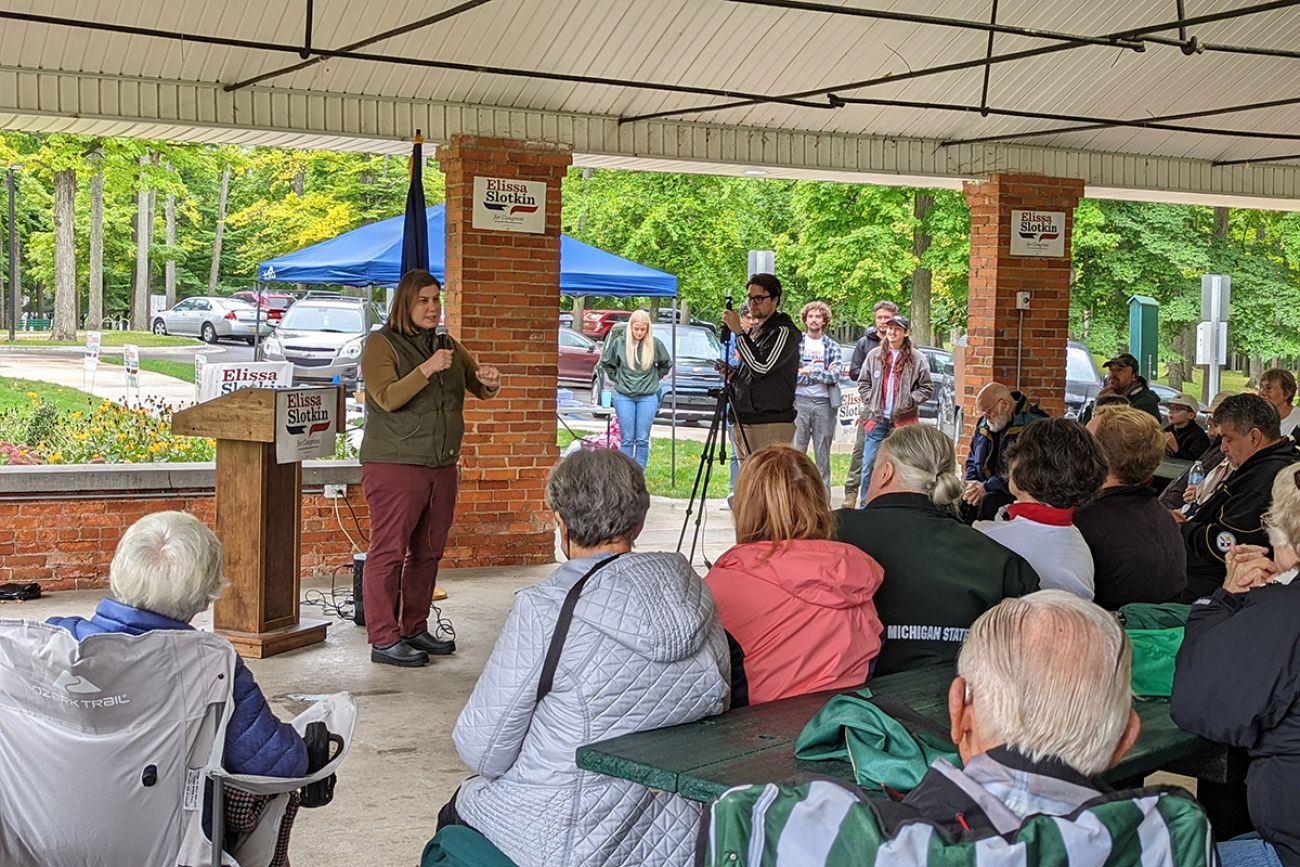 U.S. Rep. Elissa Slotkin, D-Lansing, speaks during a town hall in St. Johns. She’s hoping to appeal to the middle and win over Republicans and independents who want a “reasonable person” to represent them. (Bridge photo by Lauren Gibbons)

Both candidates are seasoned campaigners who have won elections many didn’t expect them to win. Both served tours in Iraq, and both are well versed in the nuts and bolts of policy issues. Depending on who shows up to vote, both have a shot at winning, although recent polling and fundraising numbers suggest Slotkin currently has an advantage.

At least four U.S. House seats in Michigan are expected to be competitive this fall, a byproduct of redistricting this year overseen by an independent commission created by voters in 2018 to end gerrymandering.

Democrats currently have a 220-212 edge in the U.S. House, and every seat is on the ballot this fall. Democrats and Republicans alike see Michigan as an opportunity to gain ground.

Michigan’s new 7th Congressional District combines Ingham, Livingston, Shiawassee and Clinton counties, along with most of Eaton County and small portions of Oakland and Genesee counties.

It has a little bit of everything: urban and rural, blue-collar manufacturing and agriculture, academic prestige and small-town flavor.

There’s a rich labor history here, from the auto industry to more recent unionization efforts of corporations like Starbucks and Chipotle, and the landscape is dotted with farms. Top employers in the region include the state of Michigan, Michigan State University, Sparrow and McLaren health systems and General Motors, and the population is 80 percent white, 6 percent Black and 6 percent Hispanic.

The district of 775,238 residents is split nearly down the middle politically. In 2020, President Joe Biden won the region 50.49 percent to Donald Trump’s 49.51 percent, according to data compiled by the state’s independent redistricting commission.

As a sitting member of Congress, Slotkin technically has the incumbent advantage. But redistricting changed the game significantly — her family farm of Holly was drawn in a separate district, so she moved to Lansing to run in the 7th, which retains the Democratic base of her current district.

Barrett of Charlotte currently serves in a state Senate seat that covers a wide swath of the new 7th.

Both candidates are good at winning tough elections.

In 2018, Slotkin, who previously served as a Middle East analyst for the CIA and worked in national security roles as part of the Bush and Obama administrations, took on incumbent Republican Mike Bishop and won.

She successfully defended her seat in 2020, making her one of seven Democrats nationwide to win a House seat that voted for former President Donald Trump.

Her strategy now builds off the same one she used in her previous two races: Win big in the heavily Democratic areas, and “lose better” in areas that trend Republican. She sees a path to getting more votes in some of the swing counties in the new district, like Eaton and Clinton.

“That is how I won the 8th District, even though Joe Biden didn't win it, (U.S. Sen) Gary Peters didn't win it,” she said. “We look at places where we think our chances are best at running up the score in a rural community.”

Barrett is a veteran of the U.S. Army and has served in both the House and Senate, where he currently chairs the Michigan Senate Transportation and Infrastructure Committee. He defeated incumbent Democrat Theresa Abed to win a state House seat in 2014, beat her again in 2016 and won in a competitive state Senate race in 2018.

Barrett acknowledged it’s a lot of pressure to take on a well-funded Democratic incumbent. Slotkin’s campaign has a fundraising advantage, raising $1.9 million this quarter and almost $9 million total for the cycle. Barrett raised $670,195 this quarter and about $2 million total so far, according to the latest campaign finance filings. Barrett has just under $120,000 available to spend, while Slotkin has almost $4 million. 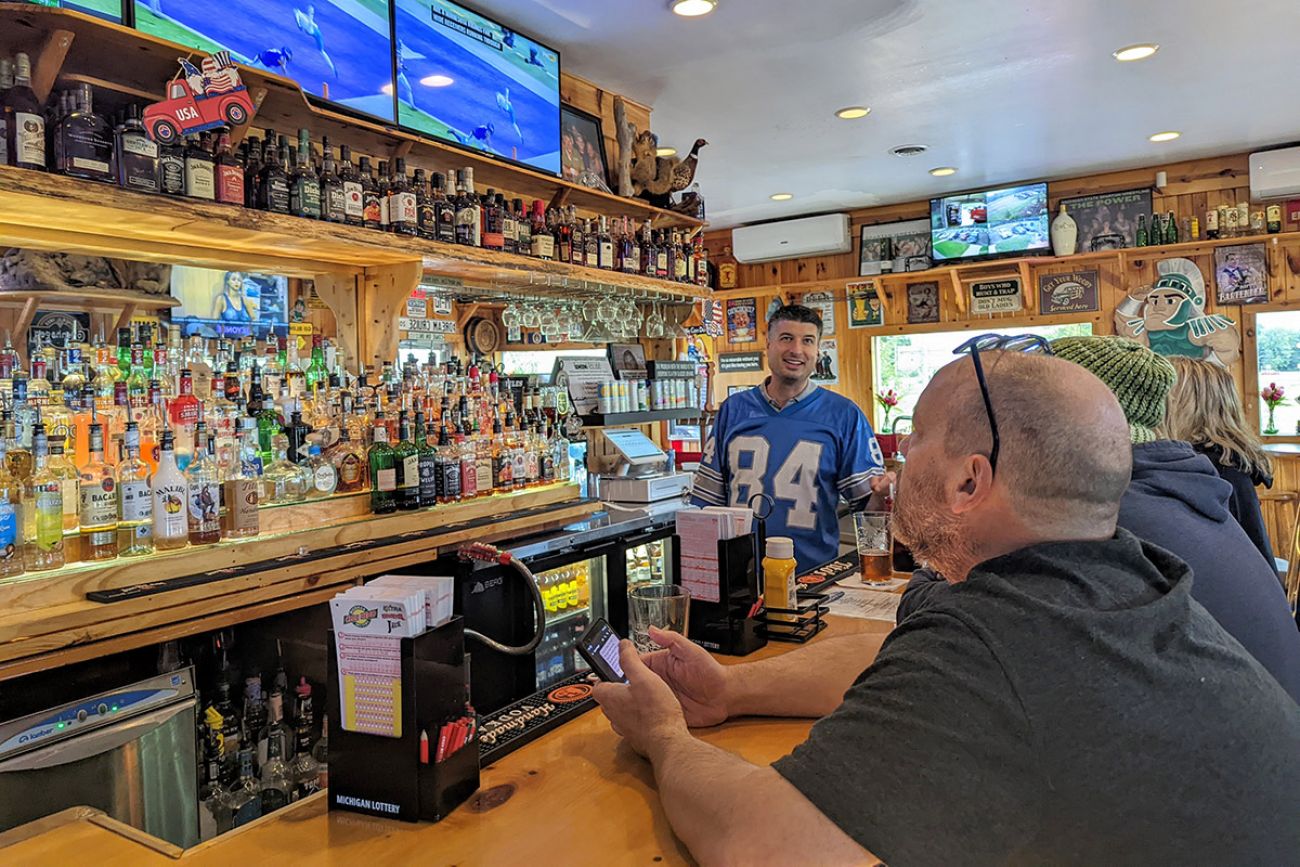 Republican Tom Barrett of Charlotte watches the Lions game and talks to patrons of Williamston Roadhouse. On the campaign trail, he’s highlighting issues like inflation and high prices of food, gas and other staples. (Bridge photo by Lauren Gibbons)

“I know how to win tough elections,” Barrett said. “(Gov.) Gretchen Whitmer won my state Senate district by 4 points, I won by 10…I'm in a position to do something about this.”

It’s not just the 7th Congressional District that’s up for grabs on Nov. 8.

Of Michigan’s 13 new congressional seats, at least three others could be competitive:

The more competitive maps are a result of Michigan’s independent redistricting process, conducted for the first time by a 13-member panel last year.

Competitiveness wasn’t a criteria for the commission in determining the maps, as members were tasked with drawing districts with equal population that also complied with the Voting Rights Act, were geographically contiguous, kept communities of interest together, retained partisan fairness, considered municipal and county boundaries and were reasonably compact.

During public hearings, many who commented asked commissioners to rethink district lines in the Lansing metro.

Officials in Ingham, Clinton and Eaton counties coordinate on public planning and often share resources, but haven’t been in the same congressional district, and some Lansing-area locals complained their needs weren’t the same as the southeast Michigan residents they currently share a district with.

Rebecca Szetela, an independent member of the commission, said she and her colleagues ultimately coupled that feedback with comments from residents of Clinton and Shiawassee counties to come up with what’s now the new 7th district.

“We think that created a pretty fairly balanced district when looking at all the other districts around it, because you can’t look at any district in isolation, you have to balance the whole map,” she said.

While competitiveness wasn’t the focus, Szetela said she viewed more competitive districts as a positive.

“I think that it engages and empowers the voters to feel like their vote means something,” she said.

Two byproducts of more competitive races? More spending, and more attack ads on the airwaves. Residents in several competitive congressional seats are seeing both in spades.

Investments from national groups continue to pour into Michigan, in part because the competitive races here could ultimately decide who holds the congressional majority.

The Democratic Congressional Campaign Committee has labeled Slotkin and Kildee as “frontline” incumbents in need of support, and view Scholten as a flippable seat.

As in any competitive race up and down the ticket this fall, a few key issues are bubbling to the surface in the 7th.

In debates and on the campaign trail, Slotkin has hammered Barrett’s conservative record on issues like abortion and has characterized him and the Republican Party’s current trajectory as “extreme.”

For his part, Barrett is focusing largely on inflation and the economy, tying Slotkin to President Joe Biden and criticizing Democrats for not doing more to address the situation.

Both candidates have highlighted their willingness to break from their party if it’s the right call for their constituents.

How voters ultimately weigh those issues when they head to the ballot box will likely inform not only who takes this congressional seat, but races up and down the ticket.

Barrett wants a chance to show voters an alternative to a Democratic-controlled Congress and White House and if elected would like to serve in roles where he could use his military background and state legislative experience on issues like veterans services and infrastructure.

He said he’s confident in his campaign and messaging, and prides himself on being an open book for prospective voters, noting, “what you see is what you get.”

Barrett, who has said he is anti-abortion but during a recent debate did not clarify whether he supports exceptions for rape and incest, said he believes that while abortion is a big issue for voters, it’s not the main issue he’s hearing on the campaign trail.

“I would say for the overwhelming majority of people, the cost of living and pocketbook issues rank as their most important,” he said. “Working families that are just trying to get our kids to school, to activities, go about our daily lives — we’re the ones paying for it.”

“Everybody is speculating what effect it will have on this year’s election — none of us know,” he said.

Slotkin said she’s noticing the opposite, noting that abortion is the issue she’s most consistently hearing about from voters across the political spectrum on the campaign trail.

Slotkin has long highlighted her appeal among independents and people who have previously voted Republican, but are looking for a new direction in the post-Trump era.

“That's where I'm placing my bet, is that people want a reasonable person, not extremism,” she said.

She told residents at the St. John’s town hall that she believes the Republican Party in Michigan has “lost their way” as they continue to fight amongst themselves on issues like the 2020 election, and believes politics works better when both parties are healthy.

As a Democrat, she can’t fix that, she said: “What I can do is swack them in November.”