At risk and first in line for COVID shots, health workers who received Pfizer vaccines are among the first to be eligible for boosters, too. (Courtesy photo)
September 24, 2021
Robin Erb (Email)
Michigan Health Watch
Coronavirus Michigan

Oct. 18: COVID vaccine boosters: When, where and how to get them in Michigan

Pfizer COVID-19 booster shots will be available to hundreds of thousands of Michiganders as early as next week, after a startling, post-midnight decision by the U.S. Centers for Disease Control and Prevention early Friday.

A CDC advisory panel had recommended the boosters on Thursday for older people and those with higher risk for the disease. The agency’s director normally abides by the panel’s recommendations.

But CDC chief Rochelle Walensky, after approving the panel’s recommendations, then expanded them to include people whose jobs put them at higher risk of exposure, such as healthcare workers and teachers. Her decision better aligns the recommendations with the efforts of the Biden administration to distribute booster shots more widely.

Specifics on what type of jobs put people at higher risk remain unclear. And for now, the CDC has not yet taken a position on whether people who received vaccines other than those made by Pfizer should receive a booster. The FDA and CDC are expected to consider a booster for the Moderna vaccine within a matter of weeks.

But guidance on which jobs count as high-risk was vague, and hospitals and public health officials told Bridge Michigan Friday they hope to have clarification in the coming days.

“It’s a little unclear, a little vague, and it’s been a bit confusing in the past two days,” said Mike Henry, senior operations project manager at Beaumont Health.

It appears now, he said, that all of Beaumont’s 34,000 employees would be eligible.

To date, more than 634,000 Michigan residents 65 and older are fully vaccinated with Pfizer doses. Additionally, the Michigan Health & Hospital Association estimates that the state’s health care industry provided 602,000 direct jobs in Michigan in 2018, with more than 234,000 of those jobs in hospitals. The Michigan Department of Education classifies another 110,000 workers as teachers.

Henry and others said boosters will likely be available to the public next week, but the process will look a lot different than the long lines and mass vaccination sites of earlier this year.

The boosters currently apply only to those who received a Pfizer vaccine and those in the specific age groups and risk categories. Vaccines are plentiful now at doctor’s offices and neighborhood pharmacies.

Eligible Michiganders will be able to call for an appointment at the health department, but “we’ll say ‘Yes, you can come back to us, but you can also check with your pharmacy or a doctor because it might be available there and that might be more convenient for you,” Ringler-Cerniglia said. 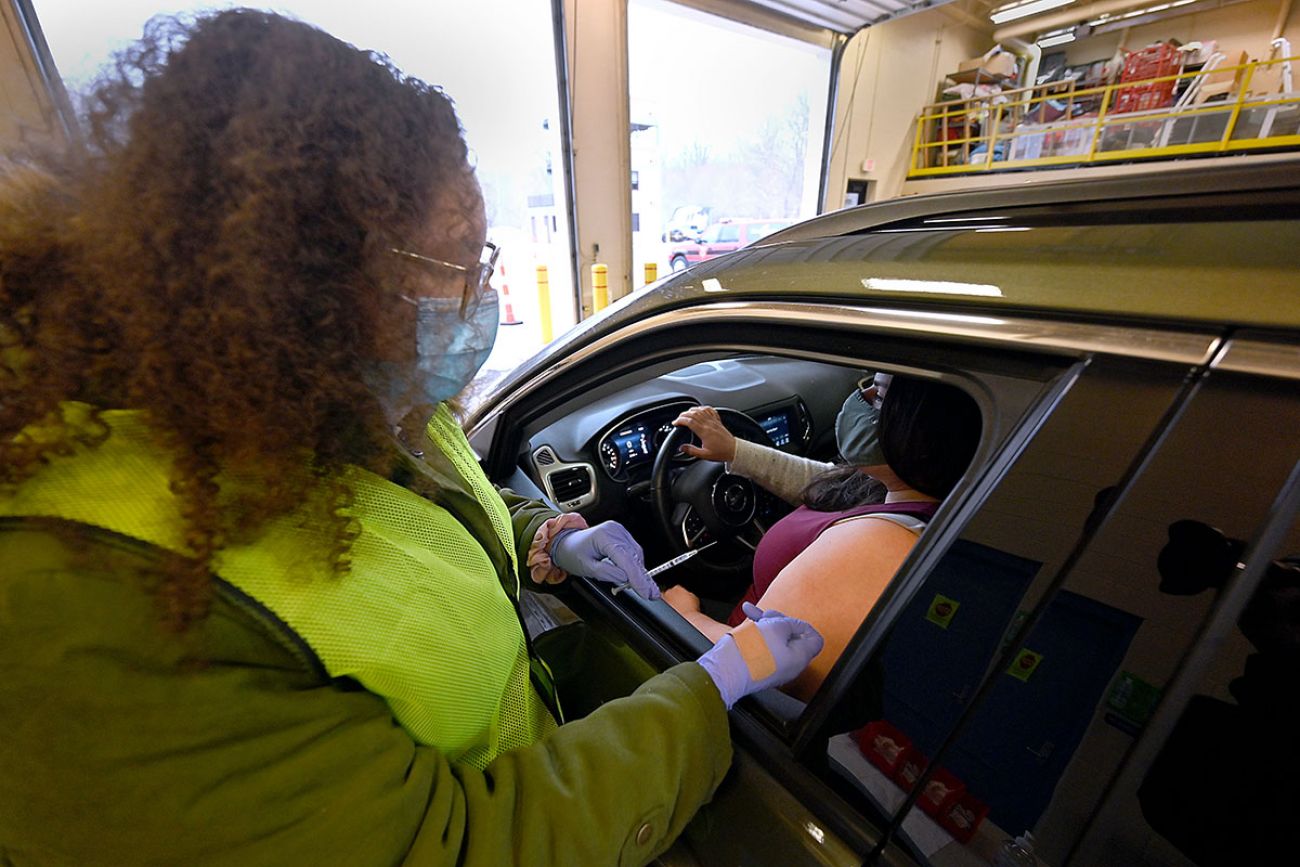 Boosters may be available for thousands of Michiganders, but there is little need and no ability for the mass vaccination sites such as this one at a Novi fire station in January. (Bridge photo by Dale Young).

Still unclear is how many vaccines will be given out at hospitals — the primary source for vaccines when they were first available to the public early this year.

In the many months since vaccines were approved, hospitals have been racked by deepening staff shortages as exhausted and frustrated workers flee the field 18 months into the pandemic.

Beaumont, as one of Michigan’s largest health systems, had given out 378,679 doses of the three vaccines now available as of Thursday. Many of those were provided in the early days of vaccine availability — with temporary staff supplementing full-time Beaumont staff at six-days-a-week, 12-hours-a-day clinics.

“We realistically can’t scale back up to what we were doing in those early days,” Henry said.

So like Washtenaw County, Beaumont said it is recommending that residents consider vaccines at their local pharmacies and doctors’ offices.

Other Michigan hospitals may offer similar advice, depending on staffing levels and patient loads, said John Karasinski, spokesperson for the state hospital association. Beaumont “would not be the only hospital in the state where staffing shortages affect the ability to do testing and provide boosters,” he said.

The early Friday morning decision was the latest in the effort to bring down steadily increasing COVID cases across the country, driven largely by the more transmissible delta variant. On Wednesday, the state surpassed 1 million confirmed COVID cases since the pandemic began, with 1,578 patients being treated in Michigan’s hospitals with confirmed or suspected cases of COVID-19.

In August, the Biden administration announced it intended to make Pfizer and Moderna boosters available for anyone 16 and older beginning Sept. 20, a decision that divided a good portion of the medical community which felt that the White House had gotten ahead of policy experts. Those who were immunocompromised were immediately eligible under CDC recommendations. By Thursday this week, 62,487 people had already received booster shots in Michigan, including 37,400 who are 65 or older.

The rapid-fire changes in federal recommendations also underscore a country divided over the best way to get ahead of COVID, as providers still struggle to convince Michiganders of getting a first shot.

At a Detroit McDonald’s Friday, staff from Henry Ford Health System and the Michigan insurer, HAP, set up a clinic to woo the vaccine-reluctant in to receive a first vaccine dose.

In the first hour, long-time nurse Michael Garcia had administered a single dose — still good news, he said. Every person convinced to roll up their sleeves for the first time may become an ambassador among other vaccine-hesitant people in their families and neighborhoods, he said.

Even as others are moving toward boosters, he said, “it’s almost a ground battle out here still — fighting the misinformation. Even if we do just three, four, five vaccines a day, that’s worth it.”