Venues packed with supporters, high-profile endorsements and a donation from Ben Affleck. What the candidate’s national popularity may, or may not, mean for Michigan’s Democratic primary.

IDs for undocumented workers? And other surprises from Michigan Democrats

Five surprises from Democratic governor candidates. One wants more services for undocumented workers. Another would prepare for a recession with construction jobs. A third can’t say when it’s raining.

El-Sayed, a Democratic candidate for Michigan governor, says a group linked to Gretchen Whitmer is accepting unlimited campaign cash from corporate interests. Does he have the goods?

With the exception of healthcare, there were no major disagreements at first official Democratic governor’s debate in 2018

A cloud that has surrounded the Democrat’s campaign for governor has lifted, as a judge dismisses lawsuit challenging his eligibility for office.

Dr. Abdul El-Sayed should stay on the August primary ballot for governor, state officials say. The Democrat's eligibility has been questioned because he was registered to vote in New York as recently as 2015.

In the race for Michigan governor, Democrats are widely condemning the state’s decision to allow Nestlé to pump up to 400 gallons per minute of water from one Osceola County well. Does their rhetoric match the facts?

It’s Thanedar vs. El-Sayed, as Michigan gov hopefuls square off over eligibility

Shri Thanedar wants the state to decide his opponent Abdul El-Sayed’s eligibility to run for governor, but Democrats may have a while to wait until the uncertainty is over. El-Sayed meanwhile is contesting Thanedar's signatures.

Republican candidates for governor Patrick Colbeck said on a video he fears Muslims are trying to bring “sharia law” to Michigan and “exercise influence” by reaching the state’s top political post. Democrat Abdul El-Sayed was his target.

Bad blood between Mike Duggan and his former health director, Abdul El-Sayed, explodes into the open, as Democratic governor candidate says his former boss 'poisoned kids' by ignoring health hazards of Detroit demolitions. In response, a spokesperson for Detroit’s mayor accused El-Sayed of ‘saying anything’ to get elected. 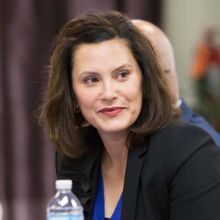 Democratic frontrunner is accused of being soft on school shootings –  two days after she speaks at a rally in support of gun reform.

El-Sayed asks court to settle his eligibility for Michigan governor

Yes, this is an important race for Democrats. But their fear about voters’ perceptions shouldn’t preemptively kill the dynamic young doctor’s campaign.

A court may have to decide whether the progressive Democrat makes it on the ballot – he was registered to vote in New York as recently as 2015. El-Sayed says he’s confident he can run and blasts his doubters.

Campaign eligibility is tricky, but has tripped up Michigan candidates

Michigan Constitution’s requirements derailed a 2010 campaign for governor before it started.