Bridge Magazine earned 20 awards from the Detroit chapter of the Society of Professional Journalists, as well as having a staffer picked as Young Journalist of the Year. (Shutterstock image)

Bridge Magazine staff members won 20 Excellence in Journalism awards from the Detroit chapter of the Society of Professional Journalists.

Bridge’s winning entries, in the online division of the awards, were:

1st place, racial justice news: Joel Kurth, for Detroit shut off water to 11,800 homes this year. Most are still off

2nd place, consumer watchdog/investigative news: Jonathan Oosting, for Michigan roads have turned to crap. So has strike among road builders.

2nd place, health news: Magdalena Mihaylova and Robin Erb, for A woman, a tick and the fight in Michigan over Lyme Disease.

2nd place, breaking news: Jonathan Oosting, for Locals to Lansing: get a budget deal because cuts are getting real.

3rd place, features: Joel Kurth, for She was born to fight, and did for three years without water.

Join Bridge for a discussion on racial justice in Michigan

Author Kevin Boyle will join Bridge readers for our discussion on Aug. 26. 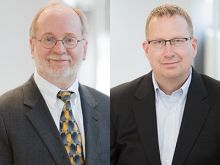 More than 2,500 Michigan classrooms were led by long-term substitutes, rather than trained educators – a 10-fold increase in five years. Bridge’s investigation won top honors from the Education Writers Association.

Very well deserved, even if I don't always get my comments posted. LOL

Congratulations on your well-deserved recognition!

Ron French does an excellent, unbiased presentation with all his work. I am a fan. Thanks, and Congratulations!

Intelligent investigation and reporting wins out!
Pleasant refuge from the screaming , devious depiction of events by video /audio outlets of all points of view.