ST. IGNACE — Mackinac Bridge Authority members asked no questions Thursday as Michigan officials unveiled a plan to allow the state and Enbridge Energy to construct a tunnel to protect Line 5, the Canadian company’s 65-year-old pipeline beneath the Straits of Mackinac.

But former members of the independent, seven-member agency that oversees the Mackinac Bridge were among dozens to voice opposition to the linchpin of proposal: Having the bridge authority agree to oversee and own the tunnel that is expected to cost $350 million to $500 million.

“Create an independent tunnel authority, if that’s your wish,” William Gnodtke, the longtime authority chairman who stepped down late this year, told his former colleagues.

“I can’t speak, and I won’t speak as to whether or not there should be a tunnel. I’m only saying it does not belong under the auspices of the Mackinac Bridge Authority.”

The meeting inside a packed conference center 2 miles north of the iconic bridge was the first public airing of term-limited Gov. Rick Snyder’s proposal for the bridge authority to oversee a tunnel protecting Line 5. 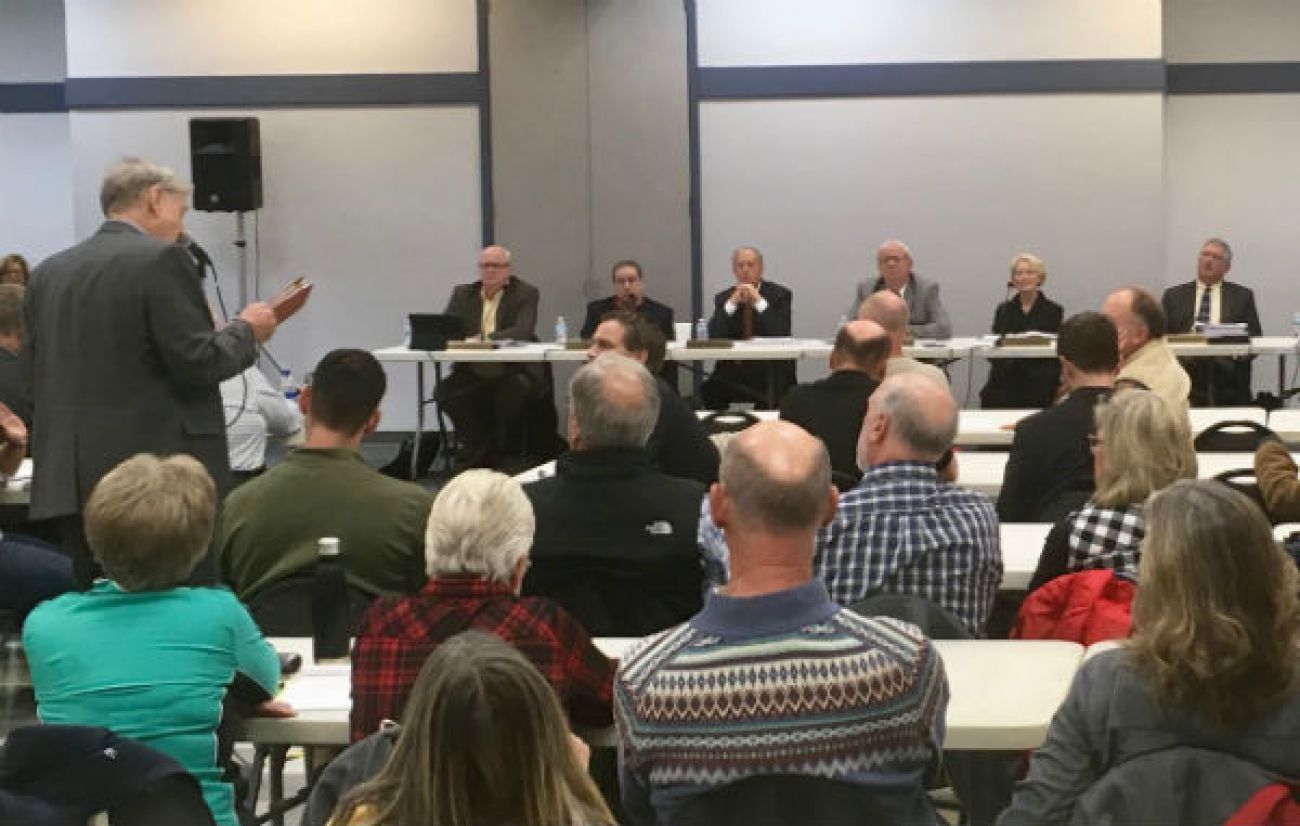 The pipeline transports up to 540,000 barrels of light crude oil per day from Superior, Wisconsin, to Sarnia, Ontario – and runs beneath the Straits.

Environmentalists and other concerned citizens fear a rupture, however slight the possibility, would create a catastrophe in the Great Lakes.

“We do need to get this right. We need to make sure we separate commodity and resource,” Keith Creagh, director of the Michigan Department of Natural Resources, told bridge authority members.

Snyder, a Republican set to leave office in January, wants to swap out twin pipelines in the Straits for a new pipe that would be protected in a bedrock tunnel 100 feet below the lake bottom.

Enbridge and the state announced a deal in October to pursue the tunnel, but the plan is fraught with controversy and legal uncertainty.

The plan hinges on the bridge authority owning the 4-mile, 12-foot in diameter tunnel, under the October agreement, and leasing space to Enbridge for 99 years.

Both Whitmer and Nessel have called for a Line 5 shutdown, and some critics say Snyder is trying to tie their hands during his final days in office.

The board did not vote Thursday, and it’s unclear whether it would before Snyder leaves office. The authority scheduled its next meeting for Feb.12 in Lansing.

Patrick “Shorty” Gleason, who was elected authority chairman on Thursday, told Bridge Magazine his colleagues would act on their own timeline and “I don’t feel any pressure at all” from the Snyder or an incoming Whitmer administration.

“I have a lot of confidence the two administrations are going to talk, and they’re going to offer us some good solutions,” he said.

If built, the tunnel — or “utility corridor” in bureaucrat speak — would shield Line 5, electrical lines, broadband cables and other infrastructure. Enbridge would pay all costs, and the project is expected to take up to 10 years to complete.

“In the event of a leak of a pipe, there is virtually no way for any product to leak out of this tunnel. It’s completely sealed,” Michael Mooney, director of the Colorado School of Mines’ Center for Underground Construction and Tunneling and a state-hired consultant on Line 5, told authority members.

The plan falls within standard tunneling practice, he said, listing three completed or ongoing tunnels that are larger, more complicated or in deeper waters: The Eurasia Tunnel in Istanbul, Turkey; Lake Mead’s water intake for Las Vegas; and the Hudson Tunnel between New York and New Jersey.

The authority board includes two members Snyder appointed days before announcing the October agreement of Enbridge: Mike Zimmer of Dimondale and Kirk Steudle of South Lyon.

Steudle, who recently retired as director of the Michigan Department of Transportation, wrote in an opinion column for Bridge Magazine on Thursday that the deal “makes sense” for the bridge authority.

“The MBA should seize the opportunity to assist in safeguarding the bridge, the Straits of Mackinac and the state,” he wrote, offering a similar argument to what state officials offered at Thursday’s meeting.

In a dueling Bridge Magazine column, Barbara J. Brown, Steudle’s board colleague and granddaughter of its first chairman, accused Snyder of handing Enbridge — a “private, foreign corporation, access to our powers and authority through a ‘shotgun wedding’” that is not in the board’s interest.

Valerie Brader — who in February resigned as Michigan Agency for Energy director and is now a paid private consultant to the state on Line 5 — said the Mackinac Bridge Authority has unmatched expertise in the Straits and a bipartisan record of success.

She said Snyder’s agreement would protect the authority from legal and financial liability should something in the tunnel go awry.

Negotitions envision Dec. 31, 2028, as a shut off date for the dual pipelines if the tunnel project isn’t going as planned, Brader said.

“The MBA would not be required to accept the tunnel if the technical specs were not met,” she said. “You would be sure that this is constructed right.”

In a statement Thursday, Enbridge spokesman Ryan Duffy said “working with the authority is a constructive and logical way to pursue a replacement segment of Line 5 in a tunnel under the Straits of Mackinac.”

Dozens of residents voiced objections to the deal during a public comment period.

Bryan Newland, council chairman for the Bay Mills Indian Community, accused Snyder of shutting Michigan tribes out of Line 5 negotiations and urged the bridge authority to rectify the oversight.

Jim Larsen, CEO of Upper Peninsula Power Co. in Marquette, said Enbridge is one of his company’s top customers and shutting down Line 5 would force other customers to make up for lost revenue.

But Gnodtke, the former bridge authority chairman, said that governing body has no business overseeing the pipeline.

In emotional testimony, he recounted a phone call from former Gov. John Engler, who appointed him to the authority in 1997 and instructed him to “look after the Bridge.”

“That’s what I’m asking you to do,” Gnodtke said. “Look after this bridge.”

Editor's Note: A previous version of this story misstated the timing of Valerie Brader's departure from the Michigan Agency for Energy.